Members of the state Health IT Advisory Council

Members of the council charged with creating a health information exchange for Connecticut seemed stunned Thursday as they realized the state Department of Social Services is continuing to create its own products for exchanging this information.

As a DSS official gave a presentation on her agency’s work, members of the Health IT Advisory Council reacted with disbelief and frustration.

The frustration built as more and more council members realized that they were not – as they had been mandated to be by the legislature – the only state effort working to construct a health information exchange (HIE).

“I didn’t really know any of this was going on. Was this known to this council that there was a completely parallel state-run process going on?” Dr. Alan Kaye, an expert in health care analytics and quality analysis and member of the council. “What have we been doing here for nearly two years?”

Patrick Charmel, president and chief executive officer of Griffin Hospital and another council member, expressed disappointment that he and others were just learning about DSS’s work now, after 20 months of work.

“I think everybody agreed that this should be an inclusive process, with all the stakeholders sitting around the table describing what it is that we want to build,” Charmel said.  “And this was done in isolation against the spirit of what we say we all wanted…how could we allow this to happen?”

Connecticut has been trying to build an HIE since 2007 with no success. The ability to exchange patient information across the health care spectrum, experts agree, reduces medication and medical errors, improves data collection on health outcomes, and reduces costs.

DSS led two of the state’s earlier efforts, and has been working to build components of  an HIE since an earlier effort was terminated in 2016. Instead of transferring all work to the Health Information Technology Officer (HITO) when it was established in 2016, however, DSS continued constructing Project Notify, Provider Registry, enterprise master person index, and an electronic clinical measure system.

“Under what authority did DSS do this, because it wasn’t under the authority of public act 15-146 for DSS to do this solo?” asked Dina Berlyn, a member of the healthcare advocate’s community advisory board and counsel to state Senate President Pro Tem Martin Looney.

According to Minakshi Tikoo, the former Health Information Technology Coordinator and the DSS official whose presentation at Thursday’s Health IT Advisory council meeting sparked discussion, these projects are nothing new.

“These projects have been there since the very beginning (the original state attempt to build a HIE in 2007) and they have matured and now come to fruition,” Tikoo said. “These have been funded and approved by the same body as your grant [the Centers for Medicaid and Medicare Services].”

Unlike many of the members who seemed to realize for the first time that DSS has been working in parallel with the council’s efforts, Allan Hackney, the state’s HITO, was well aware that DSS had continued work. 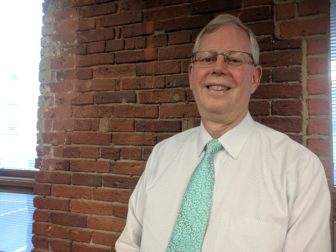 “It did become evident that there were some potential opportunities or redundancies depending on the use case and we agree that as we go forward we will evaluate them,” Hackney said. “We don’t want to duplicate if we can use theirs.”

Hackney explained that his office has known since 2017 that it will need to evaluate the tools that DSS is creating and see how they can be woven into the “network of networks” it is building.

“We are not going to fund the same things twice,” said Joe Stanford, a representative from DSS on the Health IT Advisory Council. “The intent was to make these projects available for the council to use for the whole environment. However, we have an obligation to Medicaid participants to provide for them.”

Hackney echoed Stanford, citing the DSS commissioner’s duty to serve the Medicaid community as he sees fit. But what does that mean for the Health IT Council, which has been mandated to create a statewide HIE?

“I think we need to get beyond whatever happened and figure out what to do now. Are you offering this to this body to use as we see fit?” said Patricia Checko, a member of the council. “But it’s a little disingenuous to suggest that it was out there, that everyone knew that there were two efforts going on.”

With $23 million and more than a decade already spent, and another $12.2 million federal grant just awarded to the council and DSS for the fourth effort, the most important question for the council to address now is how to move forward.

For now, it looks like the council will be focusing on its number one priority – creating its own version of an electronic clinical quality measure system – because the system DSS is building will not work statewide.

“Doesn’t that say a lot?” Kaye said. “This is supposed to be a statewide effort.”