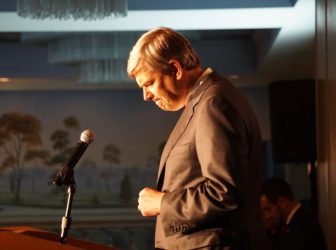 Stamford — Bob Stefanowski stood Thursday night before Republican Party activists and elected officials still trying to take the measure of the political newcomer who largely sidestepped them on the way to winning a five-way Republican nomination for governor in August.

“I want to thank the Republican Party,” Stefanowski said, addressing the Prescott Bush Awards Dinner, the party’s major annual fundraiser. “You know, I took a different route to this nomination.”

It was the 40th year for the Bush dinner, the second Stefanowski has attended — and the first at which he was taken seriously as a political figure. When Stefanowski came last year to spread the word he was running for governor, he was viewed as an interloper. He says he took no offense.

“Nobody knew me then,” Stefanowski said.

Stefanowski qualified for the Republican primary by petitioning, a path that has carried no one else to victory in a statewide primary in Connecticut. It was an alternative his campaign chose in February, when he quickly ramped up his television advertising — making an early investment with his own money that proved decisive.

It came with a price, leaving him outside the mainstream of activists.

So, how is he doing in getting the GOP behind him?

“Who knows? That’s the million-dollar question,” said Michael Barbaro, president of CT Realtors and a frequent attendee of the Bush dinners. “But it feels good.”

Since winning the primary a month and a half ago, Stefanowski has addressed the Republican State Central Committee and met with his former opponents and leaders of the Republican legislative caucuses, Rep. Themis Klarides of Derby and Sen. Len Fasano of North Haven. But the party staged no unity rally or other public celebration.

“This is the first time I think we had everybody in the room at the same time,” Stefanowski said after addressing the audience. “I feel good about it. I think the party is absolutely united.”

Klarides, who revved the crowd with a speech about how the GOP is now competitive with Democrats in the General Assembly, offered a welcome from the stage to one-time outsider.

“You are now part of this family, Bob,” she said.

David Stemerman, a hedge-fund founder who outspent Stefanowski in pursuit of the nomination, mingled. He underwrote a table, providing free dinner tickets for volunteers chosen by the party. Stefanowski praised him from the stage, saying he is relying on Stemerman for policy advice.

Richard Foley, a former Republican state chairman who worked for Steve Obsitnik, one of Stefanowski’s four rivals in the primary, said the nominee is making progress with the establishment.

“They are warming up to him,” Foley said.

The unconventional path Stefanowski followed to the nomination now is seen as possibly transforming how subsequent candidates view conventions, where success relies on a candidate spending months courting a universe of fewer than 2,000 insiders rather than more than 400,000 Republican voters.

The reaction to Stefanowski from elected officials at the dinner was mixed, at least when the officials were given a chance to talk without being quoted by name. There are fears that Stefanowski won’t have the financial resources to compete with Democrat Ned Lamont, a wealthy self-funder.

But, as one official said, whatever reservations they may have about Stefanowski pale against the alternative: Another four years out of power.

On and off stage Thursday night, Stefanowski was bullish. Stefanowski poked fun at his subdued speaking style, a tendency to frown and knit his brow and a reluctance to stray in public from a handful of talking points, the central one being his goal to eliminate the income tax over eight years, using lower taxes to stimulate economic growth.

Deadpan, he said he gets criticized by the press for “being too bubbly and smiling too much, going off script. So, I’ll try to control myself with my level of excitement this evening.”

Stefanowski declared one victory, noting that the debate has focused on his major issue — how to cut taxes.

“We’ve changed the discussion of the debate as to who’s going to be the better tax cutter — a conservative fiscal Republican or a Democrat who’s on tape saying he’s going to raise taxes. That’s how I know we’ve won.”

He said winning the cross-endorsement of the Independent Party will provide a comfortable way for Democrats to cross over and support him.

“That’s going to put us over the top in this election,” he said.

He ended with a prediction and a promise.

“I’ll tell you tonight ladies and gentlemen, over the next 40 days there is no way in the world I’m going to lose this election to Ned Lamont.”