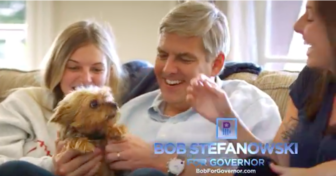 A softer view: Kids and a dog.

A new television commercial featuring his wife, three daughters and the family dog reflects a shift by Republican Bob Stefanowski toward a softer message, leaving attacks on Democrat Ned Lamont to a super PAC that has boosted its weekly advertising buy in Connecticut’s volatile gubernatorial race.

Change PAC, which is funded by the Republican Governors Association, increased its weekly television buy in Connecticut from about $300,000 this week to an average of $430,000 in the final two weeks of the campaign. The RGA announced this week it intends to spend $60 million nationally on gubernatorial races over the next three weeks.

“Our polling shows the race is still very tight, and we are going to continue to invest as long as we see the ability to make an impact,” Jon Thompson, a spokesman for the Republican Governors Association, said of Connecticut.

The RGA has played a crucial role in leveling the field in Connecticut, where the independently wealthy Lamont continues to outspend Stefanowski on television. For example, Lamont is running 157 commercials on CBS this week, including two during this Sunday’s Patriots’ game, compared to 74 for Stefanowski.

With the independent expenditures by Change PAC, the spending is nearly even. Its latest commercials play on fears that Connecticut is losing businesses and its next generation of workers. In one, an actress playing a mother talks to her daughter, a college senior looking at potential employers in Texas, Florida and Georgia.

”Mom, I would stay if I could, but there’s nothing here for me,” the daughter says. “I’m going where the jobs are.” It ends with the mother saying Lamont would be another version of Gov. Dannel P. Malloy, a Democrat not seeking re-election.

The new Stefanowski ad is aimed at boosting the candidate’s favorable ratings among voters, as well closing a gender gap that puts him at a significant disadvantage among women. It takes a lighter touch than the RGA spots, featuring the candidate at home, tidying up after his daughters, but it ends with a punch. As the candidate tosses out two bags of trash, he says, “It’s time to clean up Dan Malloy’s mess.”

Negative advertising directed at both major-party candidates have taken a toll. Slightly more voters had unfavorable opinions of them than favorable in the latest Quinnipiac University poll. The unfavorable/favorable splits were 45 percent to 44 percent for Lamont and 44 percent to 39 percent for Stefanowski.

With Lamont spending $12.1 million on his own campaign, the Democratic Governors Association has not been a factor in advertising, leaving the Lamont campaign pursuing a two-track approach in which it is simultaneously airing positive and negative spots. Stefanowski has loaned or contributed $3 million of the total $5 million raised by his campaign through the end of September.

In one ad, Lamont portrays himself as an agent of change, an effort to undercut what polls have found to be Stefanowski’s strong suit. The Republican is supported by a 3-1 margin among the nearly one-third of voters who place a premium on what they see as a candidate’s ability to bring change.

The other portrays Stefanowski’s central promise to eliminate an income tax that produces half of the state’s revenue as necessarily requiring draconian cuts, and it pronounces President Donald J. Trump as his mentor.

Stefanowski, who has embraced Trump’s tax cutting and given him an overall grade of A, says he would eliminate the income tax over eight years, with a big proviso — only if the cuts would trigger unspecified increases in revenue from economic growth.

The ad flashes a series of attributions to news organizations, including CT Mirror, as a narrator says Stefanowski’s plan would force the closure of emergency rooms, increase health care costs, and cut spending on education. But the stories cited in the ad report that Lamont or his campaign has made those assertions, so Lamont is essentially quoting himself.

Lamont and Stefanowski are two of the five gubernatorial candidates on the ballot, but they are the only ones with a significant presence on television. The others are Oz Griebel, the former leader of the MetroHartford Alliance, Rod Hanscomb of the Libertarian Party and Mark Stewart Greenstein.

Griebel has distanced himself from both major-party candidates with a commercial mocking their negative ads and portraying each as a puppet.

“This is our choice for Connecticut governor, really?” a narrator says as the puppets dance. “Stefanowski just whines that Lamont is tied to Malloy. And Lamont just whines Stefanowski is tied to Trump. They don’t have real solutions.”