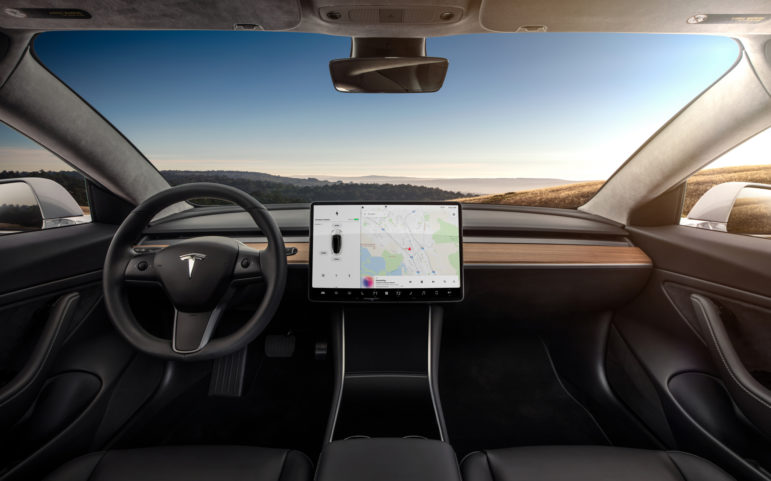 The interior of a Tesla Model 3. All of the car’s functions are controlled through the touch screen.

Disabuse yourself of the notion, if your entertain it, that electric cars are elaborate golf carts that can barely get out of their own way. That is not the case, by a long shot.

I took a short spin in a Tesla Model 3, driving through the streets of West Hartford and on I-84. I now see why people like Teslas.

The interior is unlike that of any car I’ve ever seen. There is no dashboard filled with dials and switches, just a giant touchscreen, from which nearly every function — turning on the A/C, looking at a map, etc. — except actual driving is controlled. It’s wild.

I drive a 10-year-old Prius. I love it; it drives beautifully and has saved me a bundle on gas over the years. But it would barely beat a recumbent tricycle off the line. Imagine my surprise when I hit the Tesla’s gas pedal and my head snapped back. The acceleration is amazing.

The ride is tight, smooth, quiet. The car is “semi-autonomous,” meaning, I guess, that it will stay in a highway lane and stop if it gets too close to a car in front or a moose bolts in front of it. I was new to the car and a bit nervous, so kept my hands on the wheel. I am probably not ready for fully autonomous vehicles, but I have to say, this was a hoot.