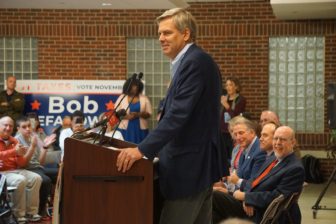 Over the two years, Stefanowski and his wife, who is a Realtor, paid a total of $1 million in state income taxes and $5.7 million in federal income taxes on $16.6 million in income. The bulk of their income was from wages and other income paid to the candidate, according to a campaign spokesman.

The documents are the first, if incomplete, glimpse at Stefanowski’s wealth, a concern of Republicans since he opted out of the state’s voluntary public financing system and is competing in the general election with a wealthier self-funder, Democrat Ned Lamont. The Democrat has used $12.1 million of his own funds so far.

Stefanowski, 56, has loaned or contributed at least $3 million to his campaign, which had raised $5 million as of Sept. 30, the end of the most recent reporting period. But he has largely turned to other contributors since winning the Republican primary on Aug. 14, making the transition from neophyte outsider to leader of the GOP ticket.

His campaign distributed copies of the summary pages of his state and federal tax returns for the past two years, the same information Lamont released a week ago for a five-year period. Lamont allowed reporters to inspect the documents, but did  not allow them to be copied or photographed.

The summaries released by Stefanowski are limited, showing types of income, but not sources. In the case of a couple filing jointly, there is no breakdown of the wages earned by a specific spouse. A campaign spokesman said, however, that the bulk of the income was earned by Bob Stefanowski over the last two years as a corporate executive.

Lamont, who sold his primary business, Campus Televideo, in 2015, reported an average adjusted gross income of $3.6 million, primarily in investment income. Lamont filed single returns, shielding the finances of his wife, Annie, a venture capitalist. A rough and outdated estimate of the Lamonts’ net worth is available due to his campaign for U.S. Senate in 2006.

In a disclosure form required of federal candidates, Lamont and his wife reported a net worth of between $90 million and $332 million, with much of it attributed to Annie Lamont. There is no similar disclosure requirement for state candidates in Connecticut.

Whoever is elected governor on Nov. 6 will have to file a limited financial disclosure in April, as do state legislators and other selected officials and state employees. It lists sources of income and investments, but not amounts or values. The form is intended to reveal potential conflicts.

The Stefanowski campaign released no information on charitable contributions. Lamont reported average annual contributions of $493,000 over the five years.

The tax years covered in the releases were a period of professional transition for Stefanowski, who took over as CEO of DFC, a payday lender that did business in the U.K., Europe and the U.S. in 2014 after nearly three years as the chief financial officer of UBS Investment Bank

He was hired after DFC was purchased by Lone Star Funds, an investment group headed by John Grayken, a reclusive billionaire who went on a shopping spree of distressed properties after the financial collapse in 2008. His tenure was relatively brief; he stunned executives he had recruited by informing them in January 2017 that he was leaving the company.

Stefanowski said his departure was prompted by Lone Star’s decision to downsize, selling off its British and European properties to focus on the U.S. market. The tax returns indicate he left the company with a comfortable package: The couple reported wages of $7.9 million in 2017, plus $1.4 million in business income.

The latter was consulting income DFC Global paid him, his campaign said.

Oz Griebel, a petitioning candidate who was the former leader of the MetroHartford Alliance, released three years of returns last month.