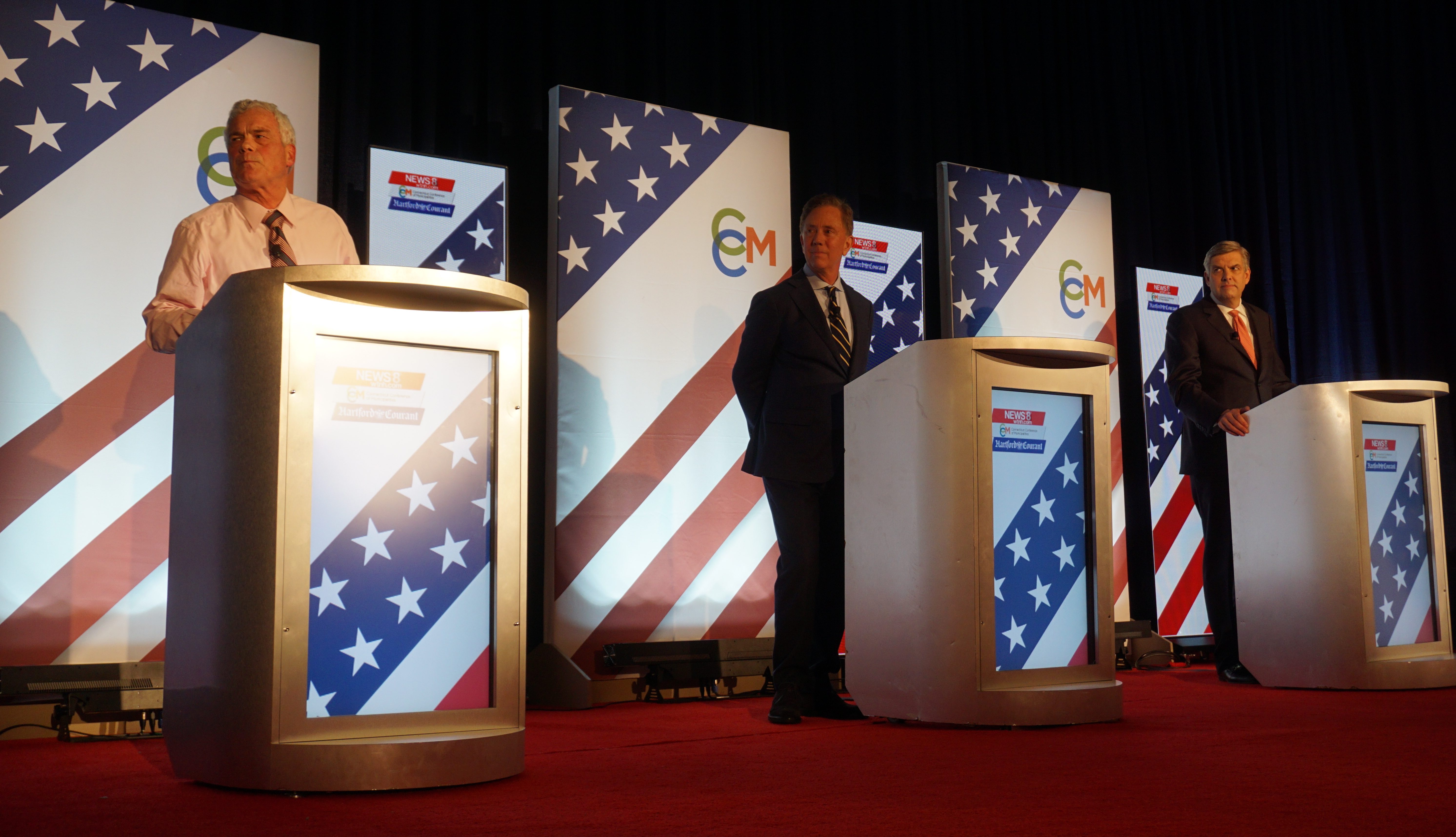 Mashantucket — The final debate in Connecticut’s volatile race for governor starred Democrat Ned Lamont and Republican Bob Stefanowski, two major-party candidates close in the polls and intent on avoiding mistakes in the campaign’s final week, plus a third-party candidate desperate to show he is not a spoiler, Oz Griebel.

Over a one-hour debate televised live Tuesday night on WTNH, Channel 8, from Foxwoods Resort Casino, the candidates treated questions as opportunities to pivot toward practiced talking points, declining repeated invitations to share specifics about policies, including how they would close a $2 billion shortfall that awaits one of them on Jan. 9.

One unscripted moment came in an unexpectedly sarcastic comment from Griebel after Stefanowski indicated he was open to allowing early voting in Connecticut as a means to increase voter participation in elections.

Stefanowski, 56, a former corporate executive, entered politics last year after not voting for 16 years. He registered as a Democrat in October 2016, but cast no vote for Hillary Clinton, Donald J. Trump or anyone else that year. He registered as a Republican in July 2017.

An audience dominated by municipal officials attending the annual convention of the Connecticut Conference of Municipalities laughed, then applauded.

Lamont, 64, a founder of a small cable-television company and former elected official in Greenwich, used the question to mention Trump, an energizing factor for Democrats. Lamont urged a strong voter turnout, saying that Trump has reminded the nation that elections have consequences.

Stefanowski, who trailed Lamont by just four percentage points in a Quinnipiac University poll released earlier Tuesday, said voters understand the gubernatorial election will have consequences for Connecticut, a point in his favor.

“I have a feeling people are going to come roaring back to the polls next week,” he said.

None of the candidates mentioned that Connecticut cannot offer early voting without an amendment to the state constitution.

Griebel, 69, the former leader of the MetroHartford Alliance, is languishing with single-digit support in recent polls, with one showing him drawing support from Lamont.

Neither Lamont nor Stefanowski would suggest after the debate that Griebel should withdraw. Asked how he would respond to anyone making that requisition, Griebel replied succinctly: “Drop dead.”

The event was sponsored by CCM, the Hartford Courant and WTNH, with CCM’s leader, Joe DeLong, joining two journalists, Keith Kountz of WTNH and Daniela Altimari of The Courant, in posing questions. DeLong tried and failed to elicit specific policy positions from the candidates, other than a unified opposition to further unfunded mandates on cities and towns.

All three passed on a hypothetical question that asked them to choose among choices they might confront next year: How would they prioritize closing a college campus, cutting municipal aid or raising taxes on the wealthy.

Stefanowski said he would privatize the Department of Motor Vehicles, a popular target for the public, but not a major source of savings in a state with a $20 billion annual budget.

“Let’s bring in the private sector and run it at a profit,” he said

He mentioned the New Britain-Hartford busway as an example of wasteful spending, though it is sunk cost and not a source of budget savings.

Central to Stefanowski’s campaign is a promise to phase out the state’s income tax, the source of half the state’s revenue, over eight years. But he talked Tuesday night about increasing state spending for health, education and transportation without saying how he would fund those investments, other than a promise to first grow the economy by tax cuts.

Griebel said he would use the state’s budget reserves and defer pensions contributions, two fiscally suspect approaches that he says are unavoidable.

“This is a serious matter that doesn’t lend itself to poll-tested platitudes,” Griebel said.

Lamont reminded him that deferring teacher pension contributions would violate covenants on bonds the state issued a decade ago to stabilize the pensions fund. He also objected to use of the budget reserves, saying it would simply delay dealing with the shortfall, not resolve it.

“I’m the one who’s going to solve this,” Lamont said.

No one fully committed to supporting a so-called death-with-dignity law that would allow the terminally ill to seek medical assistance in ending their lives.

“I think I would,” Lamont said.

Griebel was cautious, saying, “I would want to understand the legal safeguards.”

“I would tend to leave it up to the families,” Stefanowski said, not quite saying he would support a new law.

A question about how to improve police relations with African-American communities, an increasingly fraught issue, gave Stefanowski a chance to say he was for tougher security at schools, while it was Lamont’s opportunity to mention the shooting deaths of 11 worshippers at a synagogue in Pittsburgh — and the NRA’s endorsement of Stefanowski.

“I don’t know what he promised to them,” Lamont said.

On Monday, Democrats publicized a Republican blogger’s post from May that quoted Stefanowski as committed to signing into law a repeal of the Sandy Hook gun controls should such a bill reach his desk. During the debate and in comments to a reporter at a campaign stop, Stefanowski tried to limit any discussion about Sandy Hook to school safety.

But he declined to say if he was misquoted in May by a Republican Town Committee member in Southington who posted an item on gun web site that Stefanowski promised to sign a bill repealing the Sandy Hook gun controls should such a bill reach his desk.

Was there anything new Tuesday?

Lamont said he appreciated some of the softer questions, especially one that  gave the candidates an opportunity to talk about their values and charitable works, such as Lamont’s volunteering in a Bridgeport high school.

“I loved that question,” he told reporters after the debate. “I’ve had plenty of policy. You want me to talk about Bob’s tax plan? Shoot me. I think we had plenty of that.”