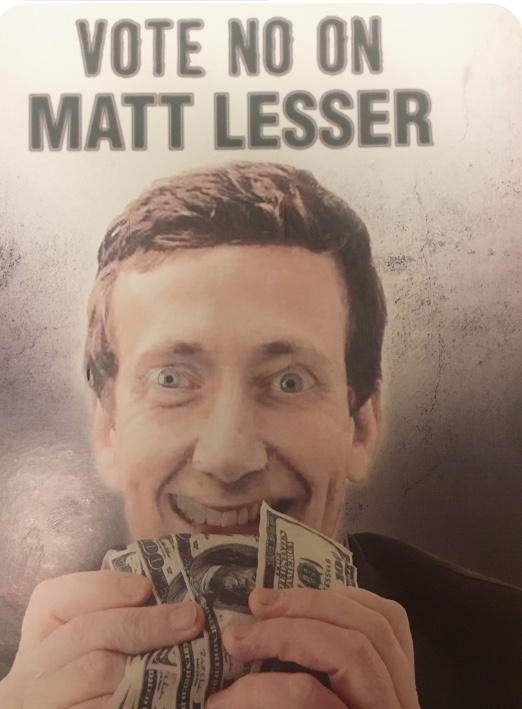 An image from the mailer directed against Matt Lesser.

In a written statement, Charamut’s campaign publicly apologized to Lesser, a 35-year-old state representative from Middletown whose wife, Sarah Steinfeld, grew up in the Squirrel Hill neighborhood of Pittsburgh, four blocks from the Tree of Life synagogue where 11 worshippers were shot to death Saturday in what authorities say was a hate crime.

The mailer uses an altered image of a wide-eyed, maniacally grinning Lesser grasping hundred-dollar bills, one that Charamut’s campaign first defended as simply portraying Lesser as a tax-and-spend liberal. The piece had a tagline: “Matt Lesser will take everything you worked for.”

“However, it is clear now that the imagery could be interpreted as anti-Semitic,” the campaign said in a statement emailed to reporters. “And for that we deeply apologize as hate speech of any kind does not belong in our society and especially not in our politics.”

“All we did was approve the piece. We didn’t recognize the image was offensive,” he said.

Lesser said he has not heard directly from Charamut or his campaign.

Charamut’s statement came less than a day after Republican State Chairman J.R. Romano, who also initially defended the mailer and questioned the political affiliations of Jews who deemed it anti-Semitic, reversed course Tuesday and pronounced it anti-Semitic after talking with Jewish friends about graphic tropes employed throughout history against Jews. 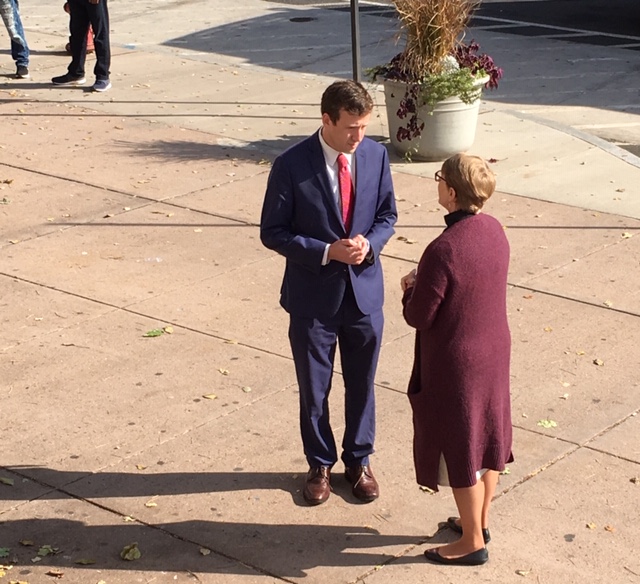 Matt Lesser had a quiet moment with the Rev. Rochelle Stackhouse before a news conference on the steps of Center Church.

“I reached out and talked to several friends and Republicans who are Jewish,” he said Wednesday in an interview. “In the course of the day, I reached a broader understanding of the history and context.”

As for his initial defense, Romano said, “I think the nature of this business is to be a natural counter-puncher.”

Senate GOP leader Len Fasano of North Haven did not return calls for comment on Tuesday or Wednesday.

News of the mailer went viral on Twitter, shared by Chelsea Clinton and CNN political reporter Jake Tapper, among others. The potential damage to the broader Republican Party was reflected in a Washington Post headline: “Republican mailer depicts a Jewish candidate gripping cash and grinning. The GOP is defending it.”

The local impact was evident in what Lesser described as an outpouring of support, including calls from Republicans who told him they intend to vote for him as a rebuke to Charamut’s mailer. Unlike the response of the Charamut campaign, Lesser said, some other Republicans were swift and unambiguous in their denunciation.

Lesser and Charamut, who is a council member in Rocky Hill, are running for the open seat in the 9th Senate District, which stretches south along I-91 from the Hartford suburbs of Wethersfield and Newington through Rocky Hill and Cromwell to Middletown. It is now held by Paul Doyle, a Democrat not seeking re-election.

Steve Ginsburg, the regional director of the Anti-Defamation League, said he does not doubt there are people who might not readily recognize the illustration as anti-Semitic, but caricature of the grinning, grasping, greedy Jew is a trope all-too-familiar to any student of anti-Jewish history.

“That image was very obvious,” he said.

The mailer was prepared and mailed before the synagogue shooting, the worst case of anti-Jewish violence in U.S. history. But it arrived at homes in Middletown on Monday after Lesser’s wife had been struggling to console her parents, who knew four of the victims.

“This was already a difficult week for my family,” Lesser said. “On Saturday, we were processing and reeling from this horrific incident, and then on Monday, of course, we saw this mailer.”

Lesser joined religious leaders Wednesday on the steps of the historic Center Church in downtown Hartford to talk to reporters about the mailer’s place in a time of angry and deeply polarized politics. The accused killer in Pittsburgh was quoted by police as expressing hatred of Jews, whom he blamed for being welcoming of refugees and undocumented immigrants.

“The rise in anti-Semitic actions across the nation and across the world, actually, is alarming in the extreme to all of us, and we need to say loudly and strongly that this has to stop,” said the Rev. Rochelle Stackhouse of Center Church, whose roots go back to the founding of Hartford by the Rev. Thomas Hooker.

Hartford Mayor Luke Bronin said President Trump bears responsibility for a coarsening of political discourse that has contributed to increasingly harsh rhetoric and ads, such as the mailer directed at Lesser.

“Today we are seeing the consequences of leadership from the president of the United States, who has embraced hatred, who has played on our divisions, and who has appealed to the worst parts of our nation’s natures,” Bronin said.

The Charamut campaign said it found itself Tuesday in “unexpected and uncharted territory.”

“It is heartbreaking that the unintended impact of this mailer has garnered national attention because our state is better than that. Ed is not the kind of person who is being depicted by the media and those in the local and national political scene as well as by those who have left threatening remarks and comments,” the campaign said.

“We sincerely apologize to Matt Lesser, the Jewish Community and anyone who found the mailer to be anything other than a depiction of policy differences between the two candidates.”

Correction: As originally posted, this story reported that the image of the mailer was produced by the campaign. Greenspan clarified Thursday it was produced by KSC and money paid to him for direct mail was a reimbursement for payments he made to KSC.