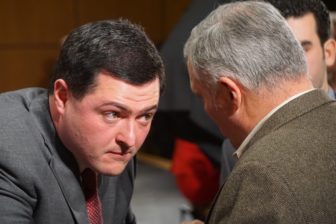 A former Republican gubernatorial candidate sent a cease-and-desist letter Wednesday to Gov. Dannel P. Malloy, threatening legal action should his lame-duck administration try to close on the purchase of land for a controversial State Police firing range at Pachaug State Forest in Griswold.

Timothy M. Herbst, a lawyer who campaigned against the project as a candidate and now represents several owners of property near the 113-acre site and the group, Save Pachaug Forest, said he suspects that Malloy will make a move towards construction before leaving office on Jan. 9.

“I wanted to go on record with a cease-and-desist letter to very publicly and directly request they stop any and all further action on this acquisition, especially in light of the fact that the two major-party candidates for governor have said they are opposed to this facility in Griswold,” he said. “We’re going to be watching very carefully.”

Herbst said he will seek an injunction should Malloy take any step toward completing the purchase.

Republican Bob Stefanowski and Democrat Ned Lamont each have publicly expressed opposition to placing the firing range in Griswold, a rural community on the Rhode Island border. Officials chose the site, saying it would be bordered on three sides from forests that offer a sound buffer.

A Malloy spokeswoman defended the project, while deferring comment on Herbst’s threat.

“We have not had the opportunity to review the letter so I am unable to speak to the details therein,” said Kelly Donnelly, the spokeswoman. “However, what I can say is that this project is fundamentally about ensuring public safety, which requires a well-trained state police force. That has consistently been the guiding priority throughout this process.”

Opponents said the range is not centrally located and represents an expense the state cannot afford. State Police currently use a firing range at the base of Avon Mountain in Simsbury near the Farmington River. Police said the 12.5-acre site is too small and frequently floods.