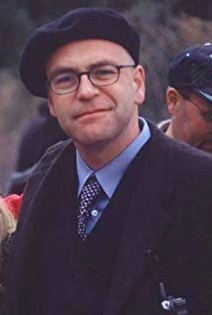 A financially fortuitous moment in Republican Bob Stefanowski’s campaign for governor was the day in May when he thanked filmmaker Reverge C. Anselmo of Greenwich for a $3,500 contribution, the maximum allowed by state law.

As they say in the movies, it was the beginning of a beautiful friendship.

Six months later, Anselmo has emerged as Stefanowski’s most important benefactor, contributing nearly $2 million to independent-expenditure groups that provide an easy path around Connecticut’s limits on direct contributions to candidates. Only Stefanowski has contributed more to the cause of electing Stefanowski governor.

It started with a direct-mail solicitation.

“He responded to a direct mailer, and I went to thank him,” Stefanowski said. “That was the connection. He sent in thirty-five hundred bucks on a direct mail. Never met him before.”

The singular role of Anselmo in Connecticut’s gubernatorial election is evidence of how even a political newcomer like Stefanowski, who launched his campaign last year without a political base of supporters and donors, can compete financially with the help of small circle of backers willing to write six-figure checks.

Anselmo, 56, is the son of the late Rene Anselmo, an eccentric entrepreneur behind the first privately owned network of global satellites. The elder Anselmo was known in Greenwich for his Versailles-inspired home, his philanthropy and his habit of occasionally pulling over his Bentley to personally plant some of the 100,000 tulip and daffodil bulbs he donated to Greenwich for roadside beautification.

Reverge Anselmo has owned a vineyard in California, where he lived for a time, and served as a Marine, written a novel, written and directed three movies and was the executive director of a fourth, “The Squid and the Whale.” He is a long-time Republican donor to federal races, but campaign finance records indicate he has largely shunned elections for state offices in Connecticut until now.

Efforts in recent days to reach him through the state Republican Party and Greenwich Republicans were unsuccessful.

A month after his $3,500 contribution to Stefanowski, Anselmo became the biggest donor to Protect Freedom Political Action Committee, a super PAC that spent $1.2 million to support Stefanowski’s campaign to win the GOP primary on Aug. 14.

The committee went inactive after Stefanowski won and the Republican Governors Association took over the role of supplementing the nominee’s campaign with its own independent-expenditure group, Change PAC. The RGA can accept unlimited contributions, allowing Connecticut Republicans to send money to the national group, knowing it will come back to Connecticut.

“I think it’s great that I’ve got a supporter like that out there. I think it’s great the RGA views us as its number one flip state,” Stefanowski said, a reference to Connecticut being one of the few states where control of the governor’s office could flip from Democratic to Republican. “And I think we’re happy where the polls are, and they are as well.”

Super PACs must remain independent of the candidates they support, though snippets of footage shot by Stefanowski’s campaign have been used by the Super PACs. Stefanowski’s campaign says it did not directly give the PACs the footage; Instead, it posted so-called B-roll footage on its YouTube, where any supporter could make copies.

Private equity manager Thomas McInerney of Westport, a donor to a super PAC that supported Steve Obsitnik over Stefanowski in the GOP primary, gave $175,000 to the RGA in September, bringing his total for the year to $300,000. Ten days after the primary, Dorothy Walker Stapleton of Greenwich, a cousin of President George W. Bush, gave $250,000.

The RGA, which already had given $5.78 million to Change PAC, contributed another $1.65 million this week, most for a late television blitz. Combined with Stefanowski’s more modest television spending, it helps keep Republicans roughly matched with the Democrats’ independently wealthy nominee, Ned Lamont.

Overall, Lamont is outspending Stefanowski by more than a 2-1 margin, $12.9 million to $6.1 million. All but $800,000 of Lamont’s campaign money came from the candidate. Stefanowski has loaned or contributed about half of his total.

The Democrat actually has a bigger advantage in general-election spending: Stefanowski spent half his money to win a five-way primary, while 80 percent of Lamont’s spending has come since his easy win in a two-way primary.

With Lamont’s financial advantage, the Democratic Governors Association has largely opted out of the race.