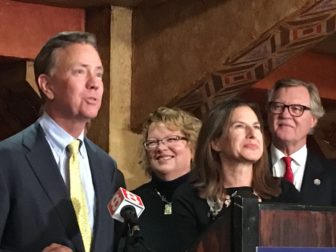 Lamont and Lt. Gov.-elect Susan Bysiewicz, along with the region’s state legislative delegation, met with business, labor, education and municipal leaders, as well as representatives of the tribal casinos and regional economic development boards.

Southeastern Connecticut has been dominating the state’s economic development headlines with a major job expansion planned at the Electric Boat Shipyard in Groton, a surging public-private manufacturing training and job placement program, and the nation’s largest offshore wind farm under development 50 miles into the Atlantic.

But Lamont, who is planning several economic development stops as part of his transition into office, said it wasn’t the region’s recent successes that led him there first.

“It really was a question of attitude as well,” Lamont told reporters during a mid-day briefing at The Garde Arts Center in New London. “This state has so many extraordinary advantages and we need people who talk about the strengths of our state.”

Lamont, whose campaign message was centered on a positive approach toward Connecticut’s fiscal challenges, said he’s looking for partners ready to be enthusiastic about the state’s economic future.

“I need people to stand up and believe that we’ve got some great times ahead of us in this state. We’re going to get through this fiscal thing,” he said, referring to surging pension costs expected to place extreme pressure on state finances for the next decade and a half. “We’re going to do it by working together and then going forward we’re going to make the investments we need to get this state moving again.”

Gov. Dannel P. Malloy announced $85 million in state incentives in May to help Electric Boat add 1,900 workers and expand its submarine-building shipyard over the better part of the next two decades.

The General Assembly endorsed $50 million in bonding for a “manufacturing pipeline” initiative that links state community colleges and trade schools with EB and other advanced manufacturers. This job training and placement program already has found jobs for more than 1,000 participants.

Sen. Cathy Osten, D-Sprague, one of the program’s most ardent supporters, said efforts continue to expand, even at the high school level. Over the past year, Norwich Free Academy has begun partnering with local trade businesses to get training and job experience for students, she said.

“We’re not Silicon Valley when it comes to computer science, but we are the Silicon Valley of advanced manufacturing,” Lamont said, adding that he would seek to build on these efforts.

Lamont, who insisted he will try to de-polarize Connecticut politics, toured the region with Republican lawmakers as well as fellow Democrats.

Sen. Heather Somers, R-Groton, said she believes the governor-elect’s outreach was more than symbolic. “I felt that today,” she said. “I felt that our suggestions and ideas were taken seriously.”

The Long Island Power Authority gave the green light last year to the development of an offshore wind farm stretching from the eastern tip of Long Island to Martha’s Vineyard — placing New London right in the center.

Tony Sheridan, president of the Chamber of Commerce of Eastern Connecticut, said this project — and all of the region’s surging economic activity — only underscores the need to jump-start the state’s transportation infrastructure rebuild.

“We’re really blossoming in eastern Connecticut with all of the various projects that are going on,” he said, adding that if businesses cannot move goods efficiently and quickly, opportunities will be lost.

That imperative extends not only to the wind farm under development and advanced manufacturing, but to another linchpin of the southeastern corner: tourism.

“If a family gets stuck for two hours on (Intertate) 95 on their way to visit Mystic Seaport, they’re not going to come back,” he said. “It’s as simple as that.”

The region’s transportation needs extend beyond highways, Sheridan said, adding Connecticut needs to increase rail trips linking the region both with New York and with Boston.

The largest tourism draw — both for the region and the state — are the Foxwoods Resorts Casino and the Mohegan Sun casino. Both facilities have seen their gaming revenues decline in recent years in the face of increased competition from new casinos in neighboring states.

This also has dramatically reduced gaming revenues in the state’s coffers. The tribes share 25 percent of video slot receipts with Connecticut in exchange for exclusive rights to offer casino gambling.

Lamont declined to weigh in during the campaign as to whether Connecticut should end that arrangement and open the door for a new casino to be developed in a major city, such as Bridgeport.

But while he didn’t offer many specifics, the governor-elect said Friday that his economic development plans for the region and the state absolutely include the Mashantucket Pequot tribe — which owns and operates Foxwoods — and the Mohegan tribe and its casino.

“The tribes have been amazing partners for this state going back a generation,” he said. “Gaming is part of the entire hospitality business. … This is part of what we are here in southeastern Connecticut. We’re going to be strong partners going forward.”

Connecticut has been “a little slow off the draw” responding to a U.S. Supreme Court decision this year that legalized sports betting in all states, he said, adding that it’s time for the state to establish regulations. This also would provide a new source of revenue for the state, but Connecticut couldn’t act unilaterally as long as it participates in its revenue-sharing deal with the tribes.