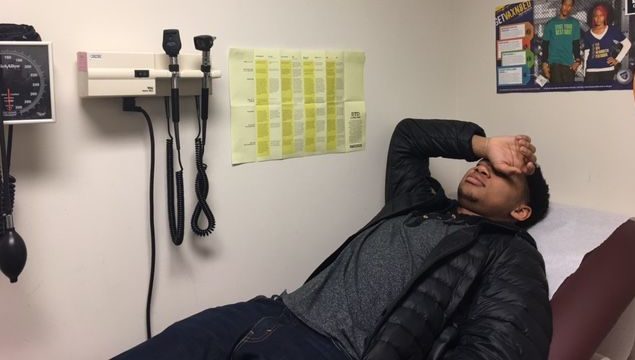 A student on an exam table in a school-based health center.

Although the number of youth in Connecticut who have committed suicide has fluctuated in recent years, making it difficult to identify a trend, mental health professionals who work with teenagers say that depression and anxiety – the typical reasons for suicide – are definitely on the rise.

“In the last five to six years there has been a very strong increase in the number of visits that students make to the school-based health centers for mental health reasons,” said Jesse White-Frese, the executive director of the Connecticut Association of School-Based Health Centers, Inc. “Students are just feeling a lot more stress and pressure, and having a lot more difficulty managing it.”

There are more than 100 school-based health centers now operating in Connecticut schools, 93 of which are funded in-part by DPH, comprising a $10.7 million line item in the state budget. These programs have helped the state and local communities provide resources to teens in a familiar environment, White-Frese said.

Despite this growing resource, the number of teenagers who report they are not connected with effective treatment when it is needed has increased, according to the most recent Youth Risk Behavior survey. Only one in four students reported actually getting the help they needed when feeling sad, empty, hopeless, angry or anxious.

“I have already had to call 2-1-1 (the crisis hotline) this year more than once for female middle school students who were having active suicidal thoughts with a plan,” said Tamara Bojarski, a social worker in the Windham school-based health center program.

In Stratford last year, a survey of 7th through 12th graders showed that 16 percent of students had attempted suicide.

“This year they (Stratford public schools) have been addressing it by doing all of these forums for parents and for kids to talk about it,” White-Frese said. “They are getting people to talk about suicide and depression and getting the resources out there to the community. They wanted to get in front of the problem.”

According to experts, getting health care providers, teachers and parents to ask the right questions is essential to effectively treating mental illnesses, including suicidal ideation.

“That kids aren’t getting connected to the treatment that they need is the most concerning to us (DMHAS),” said Andrea Duarte, behavioral health program manager for the Department of Mental Health and Addiction Services (DMHAS) and co-chair of the state’s suicide advisory board.

Instead of immediately sending a child who mentions suicide to the emergency room, Duarte said evaluating the true risks is important to avoid over- or under-reacting.

“People are having a knee jerk reaction and getting kids to the emergency room and causing a worse problem,” Duarte said. “If they are not in imminent risk, they need to work with a provider.”

Going through the stress and trauma of an emergency room visit only to be sent home without the appropriate supports teaches children not to ask for help because their problems were not deemed “bad enough,” she added.

School-based health centers across the state are now using the Columbia Suicide Severity Rating Scale on students who present with depression or suicidal ideation. 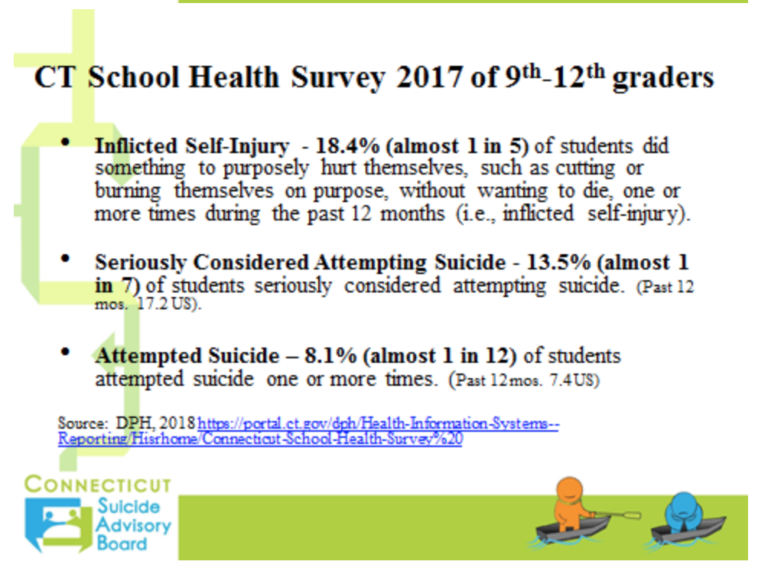 Actual suicides
In 2017, 14 children between the ages of 12 and 17 committed suicide in Connecticut, the highest number of youth suicides since 2001, according to the office of the Child Advocate.

But this year – at least so far – the numbers look a little better.

In the first nine months of 2018, Duarte said, there were four suicides – and the beginning and end of a school year has already passed, which is statistically the most common time for suicides.

“If you look at youth [suicide], our numbers go up and down routinely. You are seeing a very slight uptick,”said Tim Marshall, the director of community mental health for the Department of Children and Families (DCF) and co-chair of the suicide advisory board. “One suicide is too much. But to talk about a concrete increase is hard to do.”

According to the Youth Risk Behavior survey, Connecticut ranks well below the national average when it comes to students who have attempted suicide or seriously considered it.

Connecticut has taken a variety of steps to prevent suicide, such as implementing suicide prevention programs and stringent gun control laws, that may have contributed to Connecticut’s suicide rate being one of the lowest in the country.

But they have not staved off a worrisome trend — the steady increase of suicide deaths across all ages, both in Connecticut and nationwide, particularly among middle-aged people.

Connecticut’s suicide rate rose 19.2 percent between 1999 and 2016, according to a recent Centers for Disease Control and Prevention report. Nationally, half of all states experienced at least 30 percent increases in suicide rates, according to the CDC.

In addition to the work done through school-based health centers, DMHAS, DCF and DPH have worked together to build up the suicide prevention infrastructure across the state.

Over the past decade, DCF has grown the 2-1-1 Mobile Crisis – a service available to all children and families free of charge – to include 14 locations across the state. During fiscal year 2018, the program received 14,485 calls, 44 percent of which were for depression or youth who were at risk of self-harm.

Unlike a trip to the emergency room, Mobile Crisis meets with families for six weeks after the call to help locate outpatient treatment providers to ensure continued care, said Jeff Vanderploeg, the president and CEO of both the Child Health and Development Institute of Connecticut and its parent organization, the Children’s Fund of Connecticut.

“The children’s mobile crisis system has been recognized nationally as a model system that other states are working to emulate,” Durate said.

Vanderploeg and his organization – with funding from DCF – have developed training, called Educating Practice Program, for pediatricians throughout Connecticut.

In 2015, DMHAS received a five-year grant for youth suicide prevention efforts from the federal Substance Abuse and Mental Health Services Administration (SAMHSA), it’s third since 2006. The grant funds are being used to establish  regional coalitions to coordinate prevention efforts at the local level and tighten up programs and protocols in school systems and communities across the state.

“It is the hub of community-based effort. They work with the school system, police department, hospitals and college campuses,” Duarte said. “They are tightening up the safety net in the community so that whatever door a person is going through, there is communication between these parties so that there is support to get the resources they need and that there is follow up.”

In the last year, similar suicide prevention initiatives have spread to 20 school districts.

The grant projects have built off efforts begun in 2011 at Central Connecticut State University (CCSU), an awareness campaign called “One Word, One Voice, One Life.”

“For a campaign to be successful it needs to be action-oriented, and that’s what we liked about the work at CCSU,” Duarte said. “The messaging was you can do something about this, be the one to start conversations with others and actively connect people with resources.”

DMHAS is not the only recipient of a SAMHSA grant to address suicide. Federal grant dollars are also going to CCSU and the Eastern Pequot Tribal Nation, making Connecticut one of the few states to receive a grant in all three domains.

In the age of technology

The increase in children diagnosed with and receiving treatment for depression and anxiety is not simply the result of a more stressful environment or poor coping mechanisms. It is also because there is more importance being placed on mental health, White-Frese said.

“The issue has always been there,” White Frese said. “But school-based health center staff wouldn’t hear about it. Now many students are learning that we are always a resource [that is] here for them.”

In the 1990s, a survey of high school and middle school principals around Connecticut reported that, on average, they believed at least 75% of the students in their schools could benefit from mental health services.

It’s not a new problem, but one that school-based health centers are finally able to address, White-Frese said.

“There are ways in which things are improving for our students,” said Emily Segal, a social worker for Family Centers in Stamford’s school-based health center program. “There is a level of tolerance that there didn’t used to be.”

But in terms of coping mechanisms, students have certainly not improved. Segal said texting as a primary form of communication instead of making phone calls has taken away a useful outlet for many students.

“They don’t have that go-to talking, pour it all out, freedom,” Segal said. “Now a lot of kids don’t have those skills to keep conversations going. I don’t know that life is more anxiety provoking today, but I do know the coping skills are just that much less developed, that much less mature in part because of technology.”

Especially for children who are anxiety-prone, receiving constant alerts – especially those about severe weather – makes it incredibly difficult not to feel panicked and stressed the majority of the time, she said.

For many students, going off the grid seems impossible, making escape impossible.

“Kids come rushing in, out of breath about hurricane warnings,” Segal said. “They have no buffer, they all have access 24-hours a day. They don’t turn off their phones even at night. They will answer the phone at 2 a.m.”