Malloy defends his legacy on jobs growth and borrowing 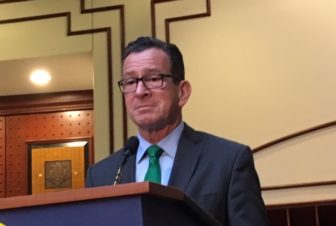 Malloy, who chaired his final State Bond Commission meeting before he leaves office on Jan. 9, told reporters in a post-meeting press conference that lawmakers and his successor — Gov.-elect Ned Lamont — should not shrink from making continued investments in transportation, even if the economy falls into recession, or risk undoing Connecticut’s economic progress.

“The state has made significant investments in its future,” Malloy said. “Our help to municipalities has been greatly needed and [I’ve] been proud to be part of that process. Our schools are stronger, our universities are in better shape than they were, our economic development efforts have led to more private-sector jobs in the state of Connecticut than at any other time in our history.”

Connecticut’s highways, bridges and rail system “is in far better shape than it was, although it has a long way to go,” he said.

Malloy, 63, the first Democratic governor in a generation, has sparred frequently with Republican legislators during his eight-year tenure over borrowing. Annual general obligation bonding stood at about $1.4 billion in 2012, reached $2.7 billion by 2016, and was capped at $1.9 billion in a bipartisan budget compromise in 2017.

Knowing he is leaving office with one of the lowest approval ratings of any U.S. governor, Malloy confronted the perception that Connecticut is on the wrong track and that his administration was an economic failure. He boasted of shrinking the state workforce by 13 percent, while the private sector grew more than 100,000 jobs.

By comparison, the state added 36,000 jobs during Lowell P. Weicker Jr.’s four years as governor and 63,000 during John G. Rowland’s 9½ years in office, he said. The state had net job losses during the administration of M. Jodi Rell, who was governor when the Great Recession of 2008 struck.

Coming after one of the worst recessions in U.S. history, a rebound in private-sector jobs was inevitable. But Malloy says the private sector in Connecticut has in 2018 added more jobs than in any year in at least 27 years.

“If you gave that scorecard to anybody out on the street, particularly after candidates running for governor said we were bleeding jobs, they wouldn’t believe it,” Malloy said. “It is a self-defeating criticism when we repeat untruths about the state.”

Of course, there are many truths about Connecticut’s finances that are unflattering, including a massive unfunded pension liability that developed over decades and chronic budget deficits that plagued Malloy during most years he held office.

Asked if there was anything he regretted not being able to do to improve the business climate, the governor looked outside his administration.

“I wish I had been able to make allies in the business community understand that their constant bad-mouthing the state was hurting our desire, their desire, to make the state a stronger attraction to out of state employers,” Malloy said.

While pledging to improve the business climate, Gov.-elect Ned Lamont also has frequently commented on the state’s pessimism, rather than promoting its high quality of life and well-educated workforce.

Malloy said some of his predecessors wrongly cut back on borrowing in bad times, costing the state’s construction industry thousands of jobs. For example, every $1 the state borrows for transportation construction work generally leverages $4 of matching federal aid.

“After years of failing to do so, we began to invest in ourselves at an appropriate level and there is no doubt in my mind that Connecticut is in a better place,” Malloy said.

After eight years of economic expansion, the U.S. economy is showing signs of faltering, causing Lamont to say he will not dip deeply into the state’s budget reserves to close the $1.7 billion gap projected in the next fiscal year. But Malloy said even a recession would be no reason to stop borrowing for needed infrastructure.

“If we hit a recession, borrowing would be cheaper,” Malloy said. “And a recession is not a reason to stop investing in the state of Connecticut. Period.”

The governor sets the agenda and chairs the 10-member bond commission, a panel of administration officials, executive branch officers and legislators. While the legislature initially authorizes potential borrowing for various projects and initiatives, the commission has sole authority to determine when and if  the state will actually proceed with borrowing the funds.

Malloy focused much of the bonding approved at his final commission meeting to support economic development initiatives and higher education.

More than $20.4 million in financing approved Tuesday, coupled with $12.5 million previously approved, will be used to provide loans and grants to support business expansion and retention initiatives at six companies as well as a state manufacturing apprenticeship program.

Among the firms and projects receiving assistance are:

The commission also approved $14.1 million in new bonding that will be combined with $7 million approved earlier to create $21.1 million in small, new grants for urban development projects.

“This is real and substantial progress,” Malloy said of the planned business expansions. “And its one of the reasons that Connecticut has seen more than 25,000 private-sector jobs created in this past year.”

The commission also approved $27.6 million in bonding for upgrades, equipment and program enhancements at the state universities and community colleges, and an other $3.8 million to finance renovations and equipment at vocational-technical schools.

The governor pushed back against critics who note Connecticut still hasn’t recovered all jobs lost during the last recession. Once public-sector jobs are considered, the state’s overall recovery rate is 90 percent.

“I am proud that Connecticut has fewer municipal employees and state employees than it did on the day I became governor. We needed to downsize. We needed to make ourselves more efficient,” Malloy said. “Go out and ask people whether they think their government should be bigger.”