Lt. Gov. Nancy Wyman, who is leaving office next month as one of the most popular figures in Democratic politics, emerged Wednesday night as Gov.-elect Ned Lamont’s unifying, if surprising, choice to succeed Nick Balletto as chair of the Connecticut Democratic Party.

In a telephone interview, Wyman acknowledged being approached to run as the governor-elect’s choice for state chair, while saying she was not fully committing until hearing if Lamont and Balletto had written a graceful ending to an awkward episode in what has otherwise been a wildly successful election year.

“Only if everything is worked out,” Wyman said, when asked if she would accept the post.

Wyman spoke before Lamont and Balletto met Wednesday night over dinner at a white table-cloth restaurant in New Haven to finish a conversation Balletto opened a month ago, when he informed the governor-elect he would like to remain as chairman. Lamont was non-committal in November, a hesitation that has turned into a distraction in recent weeks.

The governor-elect and Balletto were expected to finalize what has become increasingly clear in recent weeks: Just as Lamont was not Balletto’s first choice for governor, neither is Balletto the governor-elect’s choice for chairman; The only thing left to resolve was terms of departure. 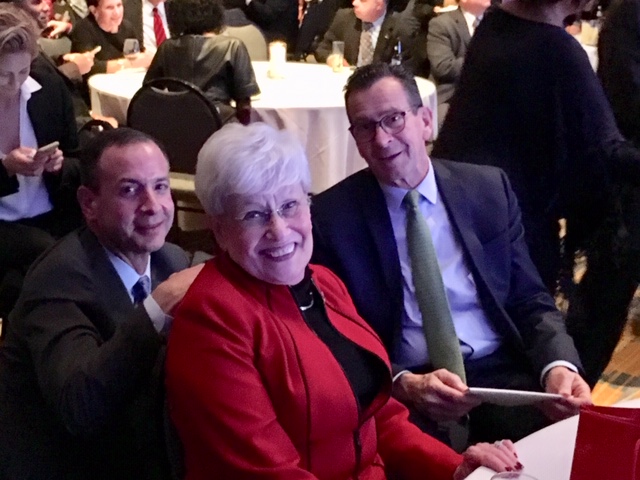 Lamont and Balletto declined to comment Wednesday night, but they announced plans to hold a joint press conference Thursday morning in Hartford to discuss “the future of Democratic Party leadership.”

Uncertainty over Balletto’s status created a degree of sourness in recent days for Democrats who just made their first state legislative gains in a decade and won every statewide office and congressional seat. Balletto hosted a party fundraiser Monday that was intended to celebrate the victors and bid farewell to those who did not seek re-election.

He introduced both Lamont and Gov. Dannel P. Malloy, shaking hands with Lamont.

Lamont, according to people familiar with the overtures to Wyman, took the stage believing she would accept his invitation to become party chair. Lamont offered what in hindsight was a playful hint: He expressed hope that Wyman, who did not seek re-election after more than 30 years as an elected official, would remain involved in public life.

“We say goodbye to Nancy Wyman — maybe not goodbye, Nancy,” Lamont said. “You were an amazing lieutenant governor for the state. You served this state for a generation. You walked over 500 miles in those three-inch stilettos of yours — and there is more walking to do.”

The petite Wyman is known for never being seen in anything other than heels, even when marching in parades. The question Wednesday night was whether Lamont and Balletto could find a graceful exit for Balletto, who was Malloy’s choice.

While the choice of a state chair is an insider’s game, the fight had the potential to color, at least temporarily, Lamont’s relationships at the Capitol, particularly with Democrats from New Haven, the single largest source of Democratic votes in any statewide election. Balletto is a former Democratic chair of New Haven.

In the absence of a clear signal from Lamont about the desire for a new chairman, Balletto gained strong public support from some key New Haven politicians, including Senate President Pro Tem Martin Looney and Vinnie Mauro, who is Looney’s chief of staff and the city’s Democratic chair.

Mauro and Ryan Drajewicz, the governor-elect’s chief of staff, joined Lamont and Balletto at the dinner Wednesday. 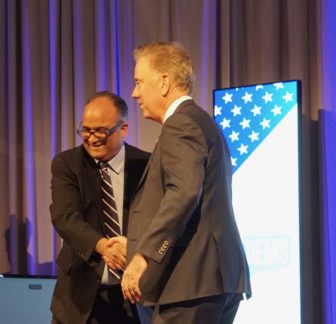 By failing to clearly express a preference for state chair immediately after his election, Lamont created a vacuum, giving Balletto the ability to make calls seeking support for another term without defying the governor-elect.

But if Lamont’s stumbled in not clearly resolving the selection of a party chair, his overture to Wyman was seen as a smart political stroke.

“So much for Ned Lamont not being a good politician,” said Roy Occhiogrosso, a former top adviser to Malloy. “This is a smart move.”

The state chair is elected by the 72-member Democratic State Central Committee. But when a Democrat is governor, few chairs have sought the post without that governor’s support.

Wyman, 72, of Tolland has been an elected official for more than 30 years, serving on the Tolland Board of Education and state House of Representatives before winning statewide office as the first woman to be elected comptroller in 1994.

Malloy tried and failed to recruit her as his running mate in 2006, when he lost a close Democratic primary for governor. In 2010, Malloy once again turned to Wyman, who then accepted his offer. Malloy has credited Wyman with helping him win in 2010 and then govern the state.

On the question of a party chair, Malloy offered a firm opinion Monday.

“What I strongly believe is that a Democratic governor of the state should run the party, or at least play a role in deciding who that is, and should have somebody that they are personally comfortable with,” Malloy said. “I always did.”