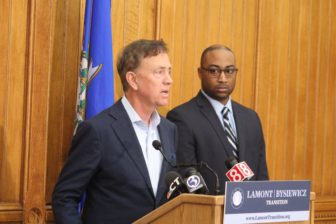 Gov-elect Ned Lamont shared his first plans for restructuring state government Friday, announcing a new post of chief operating officer — a position recommended and never implemented decades ago in Connecticut, while becoming increasingly common in governors’ offices across the U.S.

While some governors have looked to corporate executives and state agency heads for COOs, Lamont’s choice is Paul Mounds, who has held a number of policy and communications jobs in state and federal government, as well as special projects that put him in touch with a variety of state agencies.

Chief operating officers in other states typically allow a governor’s chief of staff to be more strategic, while fostering close cooperation between agencies that often operate as independent silos. Mounds will report to Lamont’s chief of staff, Ryan Drajewicz.

“This decision comes after a lot of thought,” Lamont said. “Ryan and I have had a chance to talk to many of the commissioners, deputies and to those that deal with our different departments across the state.”

Lamont said the new post will not require additional funding, just a reapportionment of current funding.

“We’ve really utilized this time during the transition to really step back and rethink the organizational design for state government,” said Drajewicz, who is joining the new administration after serving as an executive at the hedge fund, Bridgewater Associates.

Mounds, 33, now the vice president of policy and communications for the Connecticut Health Foundation, was an aide to Gov. Dannel P. Malloy for five years, leaving the administration in late 2016 as the director of policy and government affairs. He also worked on the staffs of U.S. Sen. Richard Blumenthal and U.S. Rep. John B. Larson.

“I very much understand the commitment of our agencies and our workforce to bring about change,” Mounds said.

More recently, Mounds was a member of the Commission on Fiscal Stability and Economic Competitiveness.

The new organizational structure will lighten the workload of the chief of staff and most likely allow Lamont’s choice for secretary of policy and management, Melissa McCaw, to focus on the state budget. In some administrations, the OPM secretary has acted as a political strategist and de facto deputy chief of staff.

Lamont, 64, the founder of a digital telecommunications company, has promised to use his network outside politics to bring a fresh approach to state government and economic development. But his early appointees to the office of the governor have extensive political and government experience, including time in the Malloy administration.

Aside from OPM, Lamont has not named an agency head.

Lamont and Drajewicz said they have focused instead on a broader structure for government, with a focus on simplifying how businesses and taxpayers interact with it.

“How do we reverse engineer these processes, these agencies to ensure that the taxypayers have a better user experience when they are looking to do business with the state of Connecticut,” Drajewicz said. “Whether or not you are a barbershop looking to open up…what is that front door? What is that experience?”

Lamont said the new structure eventually could lower costs, but its first goal is to improve coordination among state agencies and how they interact with the public.