Lamont urged to consider tolls for all drivers, not just truckers

A policy group appointed by Gov-elect Ned Lamont’s transition team recommended Wednesday that he set aside a campaign pledge and seek electronic tolling on all vehicles and higher gasoline taxes to fund critical transportation improvements.

The recommendations delivered to Lamont’s transition team at Bradley International Airport run counter to Lamont’s campaign pledge only to establish tolls on large trucks, following a Rhode Island policy now being challenged in court by the trucking industry.

A policy group composed of transportation advocates, planners, state and municipal leaders, labor officials and others also recommended discount transit passes for all public college and university students, a new state program to leverage private investment in transportation upgrades, and a streamlined hiring process to improve an under-staffed state Department of Transportation.

Wednesday marked the end of three days of briefings Lamont’s transition team received from 15 working groups tasked with studying a myriad of policy issues. The proposals then will be reviewed by the incoming governor’s team for possible inclusion on the administration’s agenda.

The governor-elect’s spokeswoman, Lacey Rose, has said the recommendations are intended to inform the new administration’s policies, not set them. Lamont, who is scheduled to attend a presentation on jobs and the economy Wednesday, was not at the transportation session.

Transportation is expected to be one of Lamont’s greatest challenges, given the state’s fiscal challenges and its need to quicken economic growth that economists and others say is at least partly depended on the ability to moves easily through Connecticut.

Maintenance and improvements of the state’s transportation infrastructure is funded by the state budget’s Special Transportation Fund, which relies heavily on receipts from retail and wholesale fuel taxes. 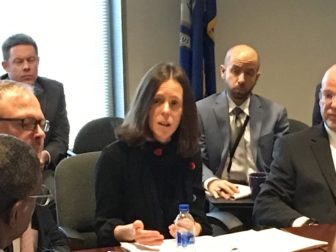 “We simply can’t get there with the tools in our toolbox,” said Kaplan-Macey, who co-chaired the transportation policy study group.

The RPA is a team of professional researchers focuses on transportation, economic development and environmental issues affecting the Connecticut-New York-New Jersey tri-state area.

“We recognize that the tolling conversation isn’t easy,” Kaplan-Macey said, adding that in addition to providing resources to promote prosperity, it also would attract more support from out-of-state motorists — who currently “are getting a free ride on our roads.”

Kaplan-Macey didn’t identify a specific new tax rates, but said Connecticut also may need to adjust rates at the pump.

The state currently imposes a flat, 25-cents-per-gallon retail tax on gasoline, which is projected to raise $501 million this fiscal year. But it also taxes gasoline before it arrives at the retail outlets. Connecticut imposes a levy of 8.1 percent on wholesale transactions involving gasoline and certain other fuels. Another surcharge effectively raises that tax to 8.81 percent.

This wholesale tax is projected to raise $330 million this fiscal year.

Together the two fuel taxes provide 50 percent of all revenue to support the transportation fund. The state uses this fund not only to cover DOT operating costs, but also to cover the debt payments on the $750 million Connecticut borrows annually for highway, bridge and rail projects. And for every $1 the state borrows and spends on transportation construction, it generally leverages $3 to $4 in federal grants.

This panel is not the first to endorse electronic tolling on Connecticut highways. A study group launched by Gov. Dannel P. Malloy reached the same conclusion in January 2016.

Senate Republican leader Len Fasano said too many of the transition policy recommendations sound like those of Malloy.

“I’m trying very hard to give Governor-elect Lamont the benefit of the doubt and not rush to judgement. However, the policy proposals that have emerged from many of his transition team meetings, including today’s proposal to toll all cars and increase the gas tax, are extremely concerning,” Fasano said.

The state DOT estimates electronic tolling on all vehicles could raise as much as $1 billion annually, depending on the level of EZ-pass discounts that the state offers to Connecticut residents. Receipts from tolling and higher fuel taxes could be used to support not only key highway improvements, but also vital rail upgrades including high-speed and more frequent commuter rail service, study panel members said.

The outgoing governor has warned repeatedly over the last two years that unless Connecticut devotes more revenues to transportation, the state will be hard pressed to do anything more than maintain an aging, overcrowded transportation system that is hindering economic development.

Lamont said during the campaign that he only would support tolling on large trucks. His Republican opponent, Bob Stefanowski, had pledged to oppose tolling altogether without identifying another source of revenue.

The panel briefing the Lamont team on Wednesday said tolls are not the only answer. 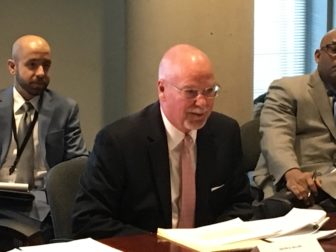 Kevin Dillon, executive director of the Connecticut Airport Authority and the study panel’s other co-chair, said the state DOT needs an infusion of personnel.

“We really have to focus on building departmental capacity,” he said, estimating the agency has about 500 posts that are authorized to be filled — on paper — yet remain vacant.

These involve not only engineers, planners and others needed to help launch projects, but also snow plow drivers and others who are vital for public safety, Dillon said.

The study group recommended giving the DOT authority to fill any post funded in the state budget — sparing them the bureaucratic approval process that involves sign-offs by the governor’s budget office and the Department of Administrative Services.

Hiring “ could be a lot quicker if we took out a few of those bureaucratic hurdles,” Dillon said.

Those checkpoints exist, indirectly, because of the state legislature, which increasingly has ordered major budget cuts without identifying the programs to be sacrificed. Over the past decade legislators have mandated that the governor achieve enormous savings targets — sometimes approaching $1 billion per year.

But the mandate often provided limited detail on how the governor is to secure these savings — sparing legislators from publicly identifying specific programs to face cuts when the budget is adopted. One of the chief tools Malloy has used over the past eight years to fulfill these mandates is to slow the rate of hiring. The governor has reduced executive branch staffing by about 10 percent during his tenure.

And because most of the growth in the state budget has been driven by pension and other debt costs — largely fixed by contract — the governor has few options other than to slow hiring to meet these savings mandates.

Rep. Toni E. Walker, D-New Haven, co-chairwoman of the legislature’s Appropriations Committee and a leader of Lamont’s transition team, said all proposals would be reviewed carefully. And while she did not weigh in on the tolls debate, Walker did say the new administration realizes transportation and increased economic growth in Connecticut are linked closely.

“Obviously transportation is huge,” said Walker, who received the report. “This is something that we’re all worried about.”

Launched in 2011 by Malloy and the legislature, the Green Bank imposes a surcharge of 1/10th of 1 cent per kilowatt-hour on monthly electric bills, raising roughly $25 million per year.

Kaplan-Macey said the goal would be to match public and private funds to enhance top priorities for business. One such example would be high-speed and more frequent commuter rail service.

Offering discounted passes to students of Connecticut’s public colleges and universities to encourage a new generation of mass transit users.

Establishing a new, integrated mobile phone app for all transit services. Advertising revenue linked to this app also could be used to support transportation.