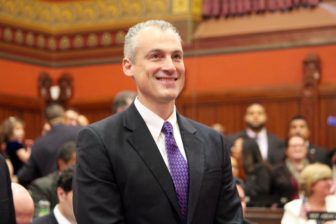 West Hartford Mayor Shari Cantor endorsed Rep. Derek Slap, D-West Hartford, in the special election for state Senate on Monday — an effort to nudge Democrats to close ranks behind Slap for a nomination under the control of the local party organization.

Slap was the first declared candidate for the Democratic nomination to succeed Sen. Beth Bye, D-West Hartford, who is resigning to accept a post in the administration of Gov.-elect Ned Lamont. Cantor’s deputy mayor, Beth Kerrigan, also is running, We-Ha.com reported Saturday.

An endorsement from the de facto leader of the West Hartford Democrats carries extra weight in a special election, where the nomination is solely under the control of the same 67 delegates at the previous nominating convention that endorsed Bye. Their decision cannot be challenged in a primary.

West Hartford is apportioned 45 of the 67 delegates to the Democratic convention in the 5th Senate District. The other delegates are divided as follows: 13 from Farmington, six from Burlington and three from Bloomfield. Only a western slice of Bloomfield lies in the district.

Slap is a former television newsman and chief of staff for the Senate Democratic caucus. He won an open seat in the 19th House District in 2016 and was re-elected without opposition in 2018.

“Derek is a champion for West Hartford, and I have  seen firsthand how hard he has worked to protect West Hartford’s education funding,” Cantor wrote in a statement. “He is a coalition builder and a leader who has fought every day for progressive values such as pay equity, workers’ rights, accountability for the MDC, job creation and a stronger Connecticut economy that works for everyone. I enthusiastically endorse Derek Slap for state Senate.”

“I’m grateful for her support,” Slap said. “Shari has seen firsthand how hard I’ve worked over the past two years to protect the town of West Hartford.”

Slap said he and Cantor communicated frequently on many issues during his first term in the House, especially during state budget negotiations that produced a bipartisan plan to bolster local education aid. “She’s been a fabulous partner and it means a lot to have her support.”

Slap is one of three Democrats eyeing the seat Bye intends to vacate after four terms. Bye, an educator who has specialized in early childhood education, has agreed to be Lamont’s commissioner overseeing the state Office of Early Childhood.

Janee Woods Weber, also of West Hartford, an attorney and director of organizational culture for the William Caspar Graustein Memorial Foundation, has said she is considering a campaign for Bye’s seat.

A fourth West Hartford Democrat, state Rep.-elect Jillian Gilchrest of the 18th House District, also considered a run, but announced late last week she had decided against it.

Slap’s candidacy raised concerns among some last week about the need for diversity in the Senate and whether replacing Bye with a 45-year-old white male was the right choice. Bye, who is gay, also is one of 11 women elected to the 36-member chamber in November — a new record for gender diversity in the chamber.

Cantor said she appreciates those concerns and values diversity.

“We need to work on having diverse voices at every level of government,” she said.

But the West Hartford area “lost decades of experience” at the Capitol since last summer, Cantor said, referring both to Bye’s departure and to veteran Rep. Andrew Fleischmann’s loss to Gilchrest in the 18th House District primary in August.

“We need someone who is ready to step in from Day One, who knows how the Senate works, who knows the people and who knows how to get things done,” Cantor said. “We always have to choose the most qualified candidate if there is a significant difference in qualifications, and in this case, there is.”

Cantor added that she and other Democratic town committee leaders in the 5th Senate District are working to attract more diversity to local boards and commissions and “we have more work to do. … Unfortunately the bench is not as diverse as we need it to be.”

No dates for the special election or nominating conventions in the 5th District can be set until Bye resigns, a vacancy is declared, and Lamont schedules an election. There will be two special elections to fill vacancies caused by lawmakers joining the Lamont administration, which begins at noon on Wednesday. The other is Rep. Chris Soto, D-New London.

Slap declined to say whether he has locked up the 34 delegates necessary to win the nomination. “I’m feeling very positive,” he said. “We’re building a very strong and diverse coalition. The mayor and her support is a very big part of that.”

Slap aded that he expects additional endorsements this week and is open to discussing legislative priorities with anyone interested. “I’m reaching out to everybody,” he said. “We’re friends. We all have the same values.”

Slap last week ended a four-year stint as a vice president of marketing and communications for the University of Connecticut Foundation. In addition to representing the 19th House District, he also lectures on political science and the media at Yale.