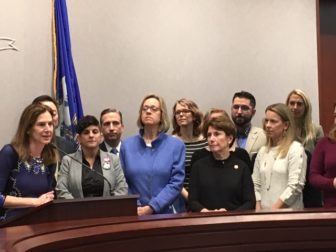 Strengthened by the mid-term elections, abortion-rights activists in Connecticut marked the 46th anniversary of Roe v. Wade on Tuesday by outlining legislation bolstering the state’s already-robust legal protections and policies covering the availability and cost of contraception, abortions and other types of reproductive health care.

A legislative bloc dominated by dozens of new and returning Democratic women in the General Assembly said the planned legislation will include a ban on insurance co-pays for abortion and a truth-in-advertising measure regulating the two dozen non-profit crisis pregnancy centers in the state that counsel women against abortion.

A press conference featuring a coalition of legislators, Lt. Gov. Susan Bysiewicz, Comptroller Kevin Lembo and Attorney General William Tong offered a rallying point for Planned Parenthood and other national abortion-rights groups that have been on the losing end of judicial nomination fights since the inauguration two years ago of President Donald J. Trump.

“Under the Trump-Pence administration, and with Brett Kavanaugh on the Supreme Court, reproductive health care, including access to safe, legal abortion, faces its greatest threat,” said Gretchen Raffa, the director of policy and advocacy for Planned Parenthood of Southern New England.

Democrats won solid majorities in the General Assembly and every statewide and congressional office, organizing around the unpopularity of Trump and promising a firewall against the conservative turn in the White House, Congress and courts since 2016.

“What you see here right now is a physical representation of the firewall to protect women’s reproductive rights, health care generally, and women’s rights and human rights,” said Tong, a former state House member in his first weeks as attorney general.

Bysiewicz said the new administration of Gov. Ned Lamont was committed to abortion rights and a broader agenda of women’s issues. Last week, Lamont named Bysiewicz and his secretary of policy and management, Melissa McCaw, to lead a new Governors Council on Women and Girls. 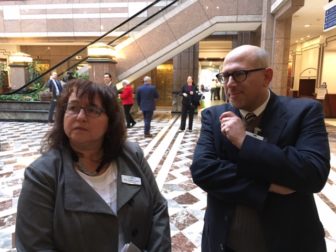 Peter Wolfgang, the executive director of the Family Institute of Connecticut, which opposes abortion and same-sex marriage, acknowledged after watching the press conference that their political opponents are strong in Connecticut.

“I think that there’s no question that we’ve lost support in the state legislature,” Wolfgang said. “How much support we’ve lost is something we don’t know yet.”

The agenda outlined Tuesday includes expanded health coverage for doulas — women who provide coaching during birth and emotional support and advice to new parents after delivery — and a legal requirement that employers make reasonable accommodations for nursing mothers to pump and preserve breast milk once they return to work.

The most controversial of the measures would be an effort to pass what apparently would be the first state law regulating advertising by pregnancy crisis centers or pregnancy resource centers.

Abortion-rights advocates accuse the centers of misleading pregnant women into thinking they are full service medical centers, while the centers’ operators say they offer legitimate and valuable support to women uncertain about going forward with their pregnancies.

“They are deceptive in how they advertise their services,” said Rep. Terrie Wood of Darien, one of two Republican legislators at the news conference. “We need to stop that. We need women to know the truth.”

Rep. Livvy Floren of Greenwich was the other Republican participating.

Sen. Mae Flexer, D-Killingly, said the advertising bill would be modeled after a San Francisco ordinance that has survived a free-speech challenge in U.S. District Court.

“We have to be very careful about how we draft this legislation,” she said.

Lisa A. Maloney, the executive director of Care Net, a pregnancy resource center in New London, said the advertising proposal is a solution to a problem that does not exists.

A previous effort to regulate the centers failed to clear a legislative committee.