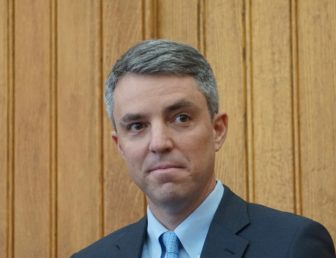 Gov. Ned Lamont on Friday nominated a former senior IBM executive, Josh Geballe, as his choice to run the Department of Administrative Services, a state agency that serves as landlord, purchasing agent, information-technology provider, construction manager and personnel department for all of state government.

Geballe, 43, of Branford is a mid-career corporate executive with a technology background whom Lamont says can bring a fresh approach to an agency at the heart of a state government that the governor sees as badly in need of modernization. He called the position something he thought “long and hard about.”

“DAS is the nerve center of state government, and it makes an incredible impact in terms of how we can streamline services, hold down costs and have a better customer experience for all of our constituents, and it is one of the jobs where we wanted to think a little more out of the box,” Lamont said.

Geballe returned to Connecticut after a stint overseas with IBM, where he worked for 11 years. He was the chief executive officer of a tech startup, Core Informatics, which developed software platforms for scientists. He is on the board of directors for the Connecticut Technology Council and Connecticut Business and Industry Association and an instructor at Yale.

Like Lamont, Geballe is a graduate of the School of Management at Yale, and Geballe’s parents are prominent at the university. His father, Gordon, is an associate dean at Yale School of Forestry and Environmental Sciences. His mother, Shelley, a lawyer and professor of public health at Yale, also is a founding board member of the nonprofit Connecticut News Project Inc., operator of CTMirror.org.

Geballe said there are significant differences in business and government, but there also are commonalities about the need to use technology to provide the highest quality of service at the lowest-possible cost.

“I’ve dedicated my  professional life to figuring out how technology can make the world better,” he said.

The nomination of Geballe, whose salary will be $175,000, is subject to confirmation by the General Assembly. He will begin work on March 1 as the commissioner-designate, succeeding Melody Currey.

Of the nine unfilled commissioner spots, a special focus is the Department of Economic and Community Development, the agency at the heart of any governor’s efforts to grow the economy. Unemployment in Connecticut is low, and the state has had two consecutive quarters of economic growth, but the gains come after years of slow growth and a series of budget deficits.

The governor said Friday he hopes to announce plans next week for significant changes and new leadership at DECD.

Lamont’s Staffing Scorecard
Of the 27 agency heads who must be confirmed by the legislature, Lamont has made nine new hires, retained 10 and is looking for eight.