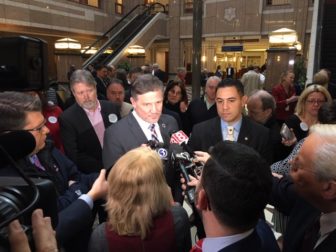 Competition from the MGM Springfield casino has been less damaging than expected to Connecticut’s two tribal casinos, but leaders of the Mashantucket Pequot and Mohegan tribal nations told legislators Tuesday that they still see a jointly developed casino in East Windsor as vital to remaining competitive in a changing gambling market.

“We understand that there are skeptics out there,” Rodney Butler of the Mashantucket Pequots said at an informational hearing of the Public Safety and Security Committee, which has jurisdiction over gambling legislation. “We also know there is a larger conversation about the future of gaming in our state.”

The tribes and MGM Resorts International, the owner of MGM Springfield and the Empire City Casino in Yonkers, N.Y., have fought to a standstill over the expansion of casino gambling and, more recently, the right to offer sports betting. The hearing Tuesday was called to update the status of East Windsor, recently dubbed Tribal Winds Casino.

The tribes and MGM, which has assembled a coalition of urban allies by proposing a Bridgeport casino, each have their partisans among the leaders of the committee: Sen. Dennis Bradley, D-Bridgeport, is the co-chair, while Sen. Catherine Osten, D-Sprague, is the vice chair. The tribal casinos are major employers in Osten’s eastern Connecticut district.

Rep. Joe Verrengia, D-West Hartford, who is the House co-chair, said he cannot see the General Assembly moving forward on casino expansion or sports betting, given the stalemate forced by the tribes and MGM.

The tribal owners of Foxwoods Resort Casino and Mohegan Sun won authorization in 2017 to jointly build a $300 million casino on a hillside overlooking I-91 in East Windsor, a project intended to blunt the loss of market share to Springfield, not grow the state’s gambling revenues.

“The fact is, Tribal Winds is a shovel-ready project that will create much-needed jobs and revenue for our state, as soon as we are approved to break ground,” Butler said.

Shovel-ready is a relative term, however. The tribes have state authorization to jointly develop what would be Connecticut’s first casino off tribal lands, the town of East Windsor has granted local approvals, and the site has been cleared and prepped for construction.

But they cannot obtain financing and begin construction until one of two things happens: The Trump administration’s Department of the Interior reverses itself and endorses the project, or Connecticut revises the 2017 law.

The state’s approval was contingent on Interior, which includes the Bureau of Indian Affairs, accepting amendments to the tribes’ gambling agreements with Connecticut, a precaution against the BIA invalidating a long-standing deal in which the tribes pay the state 25 percent of gross slots revenues in return for exclusive rights to casino gambling.

MGM successfully lobbied Interior Secretary Ryan Zinke to withhold approval. Zinke recently resigned amid several investigations, including one pertaining to his handling of the East Windsor issue. With Zinke’s departure, the tribes say they are optimistic the BIA will sign off on the project.

Meanwhile, Osten has filed legislation removing the BIA approval as a state requirement for construction to begin. Brown said passage of Osten’s bill would allow the tribes to obtain financing and begin construction.

“We’re ready to go when you are,” Brown said.

The tribes have paid the state nearly $8 billion over the past quarter century, but the annual payments have fallen from a high of $430 million in 2007 to $263 million last year.

With the new competition, the slots revenue was projected to fall to $203 million in the current fiscal year, but the state has twice revised the revenue estimates upward to nearly $250 million as MGM Springfield has fallen short of original projections.

The tribes say Tribal Winds would produce $70 million in annual revenue for the state, but that is not a net increase, as the new casino would draw some gamblers who now go to Foxwoods or Mohegan Sun.

Bradley asked Butler and Brown if they could place $70 million in escrow as a guaranteed return to the state. The tribal leaders say their agreement with the state calls for a $30 million fee, once construction begins.

Butler and Brown were the only speakers at the hearing.