Ending a ‘shadowy system of kickbacks’ 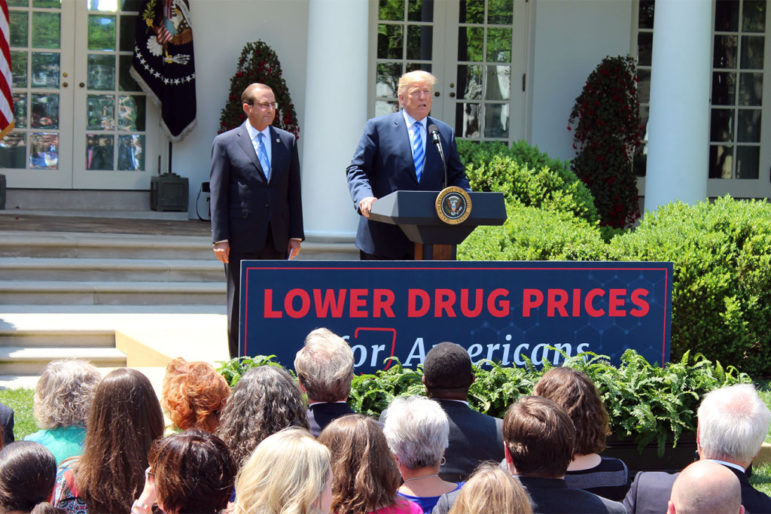 Few consumers have heard of the secret, business-to-business payments that the Trump administration wants to ban in an attempt to control drug costs.

But the administration’s plan for drug rebates, announced Thursday, would end the pharmaceutical business as usual, shift billions in revenue and cause far-reaching, unforeseen change, say health policy authorities.

In pointed language sure to anger middlemen who benefit from the deals, administration officials proposed banning rebates paid by drug companies to ensure coverage for their products under Medicare and Medicaid plans.

“A shadowy system of kickbacks,” was how Health and Human Services Secretary Alex Azar described the current system in a Friday speech.

The proposal is a regulatory change applying only to Medicare plans for seniors and managed Medicaid plans for low-income people. But private insurers, who often take cues from government programs, might make a similar shift, administration officials said.

Drug rebates are essentially discounts off the list price. Outlawing them would divert $29 billion in rebates now paid to insurers and pharmacy benefit managers into “seniors’ pocketbooks at the pharmacy counter,” Azar said.

The measure already faces fierce opposition from some in the industry and is unlikely to be implemented as presented or by the proposed 2020 effective date, health policy analysts said.

In any event, it’s hardly a pure win for seniors or patients in general. Consumers are unlikely to collect the full benefit of eliminated rebates.

At the same time, the change would produce uncertain ricochets, including higher drug-plan premiums for consumers, that would produce new winners and losers across the economy.

The list price for many brand-name medicines has doubled or tripled in recent years. But virtually the only ones affected by the full increases are the many patients who pay cash or whose out-of-pocket payments are based on the posted price.

By banning rebates, the administration says its intention is to ensure discounts are passed all the way to the patient instead of the middlemen, the so-called pharmacy benefit managers or PBMs. That means consumers using expensive drugs might see their out-of-pocket costs go down.

If rebates were eliminated for commercial insurance, where deductibles and out-of-pocket costs are generally much higher, chronically ill patients could benefit much more.

Ending rebates would give the administration a drug-policy “win” that doesn’t directly threaten pharmaceutical company profits.

“We applaud the administration for taking steps to reform the rebate system” Stephen Ubl, CEO of PhRMA, the main lobby for branded drugs, said after the proposal came out.

The change might also slow the soaring list-price increases that have become a publicity nightmare for the industry. When list prices pop by 5 or 10 percent each year, drugmakers pay part of the proceeds to insurers and PBMs in the form of rebates to guarantee health-plan coverage.

No one is claiming that eliminating rebates would stop escalating list prices, even if all insurers adopted the practice. But some believe it would remove an important factor.

PBMs reap billions of dollars in rebate revenue in return for putting particular products on lists of covered drugs. The administration is essentially proposing to make those payments illegal, at least for Medicare and Medicaid plans.

PBMs, which claim they control costs by negotiating with drugmakers, might have to go back to their roots — processing pharmacy claims for a fee. After recent industry consolidation into a few enormous companies, on the other hand, they might have the market power to charge very high fees, replacing much of the lost rebate revenue.

“From the start, the focus on rebates has been a distraction from the real issue — the problem is the price” of the drugs, said Matt Eyles, CEO of America’s Health Insurance Plans, a trade group. “We are not middlemen — we are your bargaining power, working hard to negotiate lower prices.”

Lower out-of-pocket costs at the pharmacy counter would be financed, at least in part, by higher premiums for Medicare and Medicaid plans paid by consumers and the government. Premiums for Medicare Part D plans could rise from $3.20 to $5.64 per month, according to consultants hired by the Department of Health and Human Services.

“There is likely to be a wide variation in how much savings people see based on the drugs they take and the point-of-sale discounts that are negotiated,” said Elizabeth Carpenter, policy practice director at Avalere, a consultancy.

Consumers who don’t need expensive drugs every month could see insurance costs go up slightly without getting the benefits of lower out-of-pocket expense for purchased drugs.

This story was first published Feb. 1, 2019, by Kaiser Health News (KHN), a national health policy news service. It is an editorially independent program of the Henry J. Kaiser Family Foundation which is not affiliated with Kaiser Permanente.

2 thoughts on “Ending a ‘shadowy system of kickbacks’”