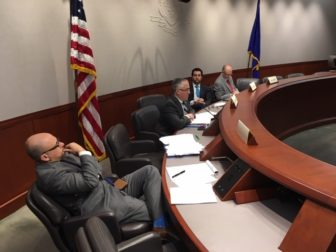 A Committee on Contested Elections deadlocked along partisan lines  Monday in its final report over whether to recommend the state House of Representatives order a new election in the 120th House District of Stratford, where an estimated 75 voters were given the wrong ballots in a race won by just 13 votes.

The issue of whether the re-election of Rep. Philip Young, D-Stratford, should stand now goes to the full House of Representatives, where Democrats hold a 90-59 advantage. Young was allowed to take the oath to begin his second term on Jan. 9, the opening day of the 2019 session, after the state Supreme Court declined to intervene.

The committee’s 25-page report offers a factual record and historical and legal context for whatever action, if any, the House decides to take. But the panel of two Democratic and two Republican legislators could not agree on whether the facts justified what they acknowledged would be the extraordinary step of invalidating an election.

Republican Jim Feehan, the loser of the race, sued for a new election, but the Supreme Court unanimously upheld a trial judge’s conclusion that the Connecticut Constitution gives sole jurisdiction over a contested General Assembly election to the House or Senate, depending on the seat in question.

The House responded by creating its first Committee on Contested Elections in 34 years, assigning two Democrats, Reps. Michael D’Agostino of Hamden and Gregg Haddad of Mansfield, and two Republicans, Reps. Jason Perillo of Shelton and Vincent Candelora of North Branford.

The legislators said they found no clear guidance from the Constitution, House rules, a manual of legislative procedures used by the General Assembly, or the scant historical record of previous Committees on Contested Elections.

The legislature has never discarded election results and ordered a new election.

But they found standards in cases pertaining to other elections, such as a disputed municipal election in Woodbridge and how the U.S. House addresses contested elections: Is there evidence of a “substantial irregularity?” And did the irregularity cast serious doubt on the outcome?

The Democrats say the interests of 75 voters who were given the wrong ballots do not outweigh those of the 10,000 who had the right ballots. A new election inevitably would mean many of those who voted on November would not in a new election, they said.

“With no ability to determine the intent of the 75, we have no concrete, verifiable evidence before us that demonstrates, to a reasonable certainty, that a different electoral  result would have occurred, and that the results are seriously in doubt,” the Democrats wrote. “We are left to guess and guesswork, as noted, cannot be a basis to order a new election and disenfranchise the more than 10,000 other Stratford residents who voted in the 120th.”

Perillo and Candelora disagreed, saying the standards generally agreed upon by the committee were met: “The scope of the error, combined with the narrow margin of victory for Representative Young, calls into question the reliability of the election outcome.”

But they also concluded that a new election need not be ordered every time the magnitude of an error is larger than the margin of victory.

At issue is the voting at Bunnell High School, a polling place for the 120th and 122nd House Districts. Boxes containing plastic-wrapped packets of 100 ballots for each district were delivered to Bunnell the night before the election and secured in a locked cabinet. Bunnell was one of eight polling places in the 120th.

A voter at Bunnell informed a polling worker at 2:30 p.m. on election day that his ballot did not list the candidates for the 120th House District, where he lived. The moderator gave the check-in clerk a new packet of ballots, informed the staff to double check all ballots and allowed voting to continue.

The Committee on Contested Elections said it could not determine if the error was the result of a clerk using the wrong packet or a printer error in labelling a packet.

“It is the Committee’s unanimous finding, based upon the testimony and evidence it received, that the 120th ballot clerk’s use of 122nd ballots was not the result of any deliberate, intentional conduct on the part of any Stratford election office, or any of the candidates, to undermine or subvert the election results or otherwise manipulate the electoral system unfairly,” the panel wrote.

By the time the error was discovered, between 38.5 percent and 43 percent of the eligible voters had voted. The estimate of how many had been given wrong ballots was based on the discrepancy in the number of voters checked as voting in the 120th against the total ballots cast in the district.

FINAL Report of the Committee on Contested Elections (Text)