Puerto Ricans press a new governor on an old grievance 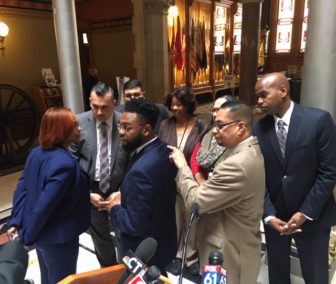 Members of the Black and Puerto Rican Caucus.

The legislature’s Black and Puerto Rican Caucus is pressing Connecticut’s new Democratic governor, Ned Lamont, to address an old and increasingly urgent grievance: A dearth of representation at the highest levels of government in the state with the highest per-capita Puerto Rican population.

The issue went unmentioned Thursday when the caucus outlined its legislative agenda for 2019, but it was the primary topic when caucus members recently met privately with Lamont, a Greenwich businessman whom they say owes a political debt to Puerto Ricans and other urban Democrats who contributed to his three-point victory in November.

“Let’s not be blind to the facts,” said Sen. Dennis Bradley, D-Bridgeport, a caucus member. “Those urban cities vote almost entirely Democrat, so now that we have a Democratic governor, if that portion of the population is the reason why you hold that seat, then you should obviously have somebody there who can tell you what the needs and wants and desires are.”

Rep. Chris Rosario, D-Bridgeport, said he believes the administration is aware of Puerto Rican candidates qualified for one of the remaining department head jobs. Without identifying anyone, Rosario said the caucus has lobbied Lamont in support of a potential commissioner of housing, a post of particular interest to a Puerto Rican community long concerned with increasing housing opportunities.

Maribel La Luz, the director of communications for Lamont, said the governor is clear in his commitment to diversity.

“The diversity of Connecticut’s Latino population includes many families of Caribbean, Mexican, Central and South American descent. You can bet that diversity will be reflected as we staff up. We’re only about a month in,” said La Luz, who is Puerto Rican. “As a full-fledged Boricua, however, it’s an honor to serve in the Lamont administration and be part of such a great team.”

Puerto Ricans no longer are the only Hispanics in the General Assembly, but the caucus name remains unchanged, a reflection of the outsized influence Puerto Ricans still enjoy in Latino politics and their trailblazing role in establishing the caucus. 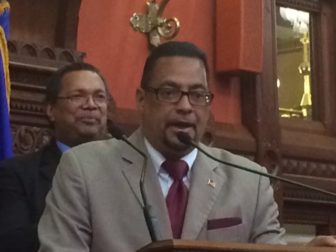 “I’ve been one of the proponents that it should be the Black and Latino Caucus,” said Rep. Jason Rojas, D-East Hartford, who is Puerto Rican.

Rosario and others say the original name has history on its side, even if other Hispanic groups continue to grow.

“I stand firmly on the name of the Black and Puerto Rican Caucus, very simply because many people have fought long and hard for this caucus to be established,” said Rep. Geraldo Reyes Jr., D-Waterbury, a Puerto Rican and vice chair of the caucus.

Reyes said transactional and identity politics may be awkward for modern politicians, but they are part of urban legislators’ relationships with constituents who sometimes feel unappreciated by elected officials and voiceless in the halls of government.

Reyes said Lamont assured Puerto Ricans after the primary they would have a voice in his administration. State representatives say their constituents want to see him deliver on that promise.

“The reps were complaining a lot of people are calling and saying, ‘What’s going on? You came to us. We voted for Lamont, and we don’t see anything happening for the Puerto Rican community,’ ” said Rep. Minnie Gonzalez, D-Hartford.

Reyes said the Puerto Rican politicians had a clear understanding with Lamont before the election about diversity in his administration.

“What appears to be a little bit awkward on the tail end wasn’t awkward in the preliminaries,” Reyes said. “We have a lot of constituents that are Puerto Ricans that have worked very, very hard for this administration. We have to go back and answer to those constituents.”

After meetings with Lamont and Paul Mounds, the governor’s chief operating officer, Reyes said he believes the administration is listening. He is telling constituents to keep an open mind.

Rep. Toni Walker, D-New Haven, who is black, said every minority group has fought for representation in government, whether in the ranks of teachers, judges or state agency heads.

“They want to feel that this  government represents them, and the best way that can be exemplified is through having at least a couple of people that look like them.”

Bradley, a black man of Dominican and Mexican descent, said he understands and supports the push for a Puerto Rican agency head. Such appointments only go to an individual, but they are messages from political leaders to a broader community.