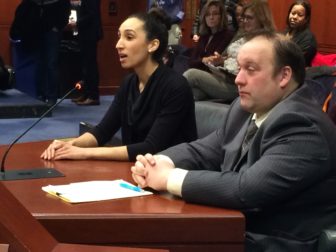 Jessica Tallie speaks about her positive experience at the Women’s Center of Eastern Connecticut. Rep. Brian Lanoue, R-Griswold, accompanies her.

A bill that would prohibit “deceptive practices” at faith-based pregnancy centers drew passionate — and conflicting — testimony from people on both sides of the issue at a legislative public hearing Monday.

Those supporting the bill said it is needed because of deceptive advertising and other practices that often give women the misimpression that the centers are medically-based and offer abortion.

Rep. Liz Linehan, D-Cheshire, told members of the legislature’s public health committee that several centers in Connecticut “operate with the appearance of a medical facility and advertise to people as though they offer abortion and emergency contraception, when they are actually opposed to these services.”

“The women they aim to lure are in a vulnerable state, looking to receive time-sensitive, sensitive health care information from qualified individuals,” Linehan said. “However, none of these centers are qualified or licensed to provide the services they may seek.”

Advocates for the faith-based centers, however, disagreed with this portrayal. Dozens of the centers’ supporters packed the hearing room and offered testimony about the care they had received at the non-profit centers.

Jessica Tallie, who got help through the Women’s Center of Eastern Connecticut, said she went to the center seven years ago as a single, pregnant 21-year-old. Tallie knew she wanted to have her baby, but said she needed assistance getting through her pregnancy.

“The center gave me a clear overview of who they were, what they believe, and how they operate before I began any sessions with them,” Tallie said. “It was a professional, transparent, and comfortable environment.”

Tallie said she was told about the option of getting an abortion, but didn’t want to go that route.

Dr. Melissa Lin Monte, medical director of Care Net Pregnancy Resource Center of Southeastern Connecticut in New London, said, “We believe in fighting for the life of the unborn who have no voice, just as doctors fight to save the life of babies born prematurely.”

But she said the clinic does educate patients about all of their options, including abortion. She said the center has “no false or deceptive”advertising. 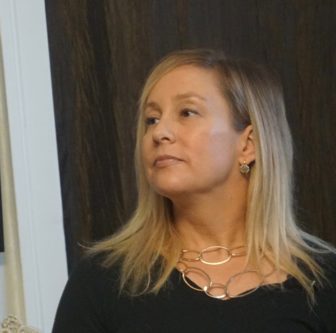 But Linehan and others said the legislation would ensure that women seeking “these time-sensitive healthcare services” are aware of the limitations of such centers before walking into one of them.

Rep. Jillian Gilchrest, D-West Hartford, went further, saying that according to research done by NARAL Pro-Choice Connecticut, women who visited such centers were told “that they were sinning for getting an abortion, that they might not make it out alive, and that some women are left with a half of a baby inside them after having an abortion.”

If pregnancy centers “want to offer religiously based advice and care for pregnant women, so be it,” Gilchrest said. “But purposefully deceiving women into thinking they are accessing reproductive healthcare in order to push religious doctrine is deceptive and should not be permitted in the state of Connecticut.”

Gilchrest said there are 25 such centers in the state and that they are set up to look like reproductive health clinics.

“That’s not what they do and I think that’s very dangerous and potentially very misleading and deceptive,” Tong said.

Bronin told legislators that the bill is similar to an ordinance enacted in Hartford to ensure that women were not confused when a crisis pregnancy center with limited services was set up adjacent to an independent, state-licensed family planning clinic.

Bronin said that the crisis pregnancy center was “designed to create the impression that it was a medical office” with “a room full of examining tables and pharmaceuticals on the shelves.”

For a number of reasons, Bronin said, city leaders were concerned that the objective of that crisis pregnancy center was to deceive.

“Regardless of where anyone stands on the question of choice,” Bronin said. “I think it would be hard to argue that we should allow deceptive and misleading practices.”

Supporters of the bill emphasized that it will not affect centers that are operating in a transparent way and are clear about the services offered.

But opponents said they feared it would place a greater burden on all faith-based pregnancy centers and could result in lawsuits against them.

Rep. Doug Dubitsky, R-Chaplin, testified that he had read through much of the testimony on the bill in advance and didn’t see “anybody who claims that they were deceived in any way by any of the practices at any of these centers.”

“There appear to be legislators who claim this is an issue, but it seems to me to be a solution without a problem,” he said.