Consolidations would have to take place by 2020

As part of his plan to cut state spending, Gov. Ned Lamont is proposing a plan that would strongly encourage certain small school districts to regionalize or face a possible reduction in the state’s education cost sharing grant.

“Small local school districts that choose to have inefficient governance structures and  too many expensive superintendents can no longer expect the state to bear the costs of these decisions,” Lamont’s budget document says. “Under this budget, a small local district’s decision to retain rather than share a superintendent may result in a reduction of a district’s [Education Cost Sharing] grant, after July 1, 2020.”

Lamont’s budget would establish a School Services and Redistricting Commission “to engage stakeholders in a thoughtful and structured process which will achieve greater economies of scale,” the budget document says.

Lamont expects that some savings at the local level could be achieved this year and continue for several years. 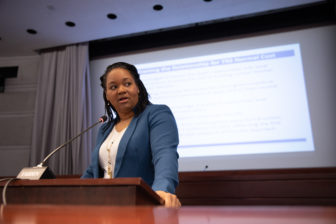 Melissa McCaw, Lamont’s budget chief, said the policy “essentially sets some heavy expectations and time points for them to provide data that would support a thoughtful  way of evaluating opportunities for consolidations and shared services.’

“The legislation says: Let’s stop talking about it and let’s start evaluating and doing it,” McCaw said, “and it says here’s what you need to do by ‘x’ date.”

The legislation the governor plans to submit was not available  immediately Wednesday to review.

The commission is modeled on a commission in Vermont that looked to regionalize certain services. The panel will look at numerous paths to economize administrative functions and make recommendations by Dec. 1, 2020 for the legislature to consider.

In the meantime, the governor proposes giving the commissioner of education discretion to withhold state funding for small districts that choose to employee their own superintendent.
During his budget speech, Lamont did not address the potential penalty for not consolidating a small district but talked about providing incentives. Neither does his initial plan define what it considers a small district.

Fran Rabinowitz,  executive director of the Connecticut Association of Public School Superintendents, said the majority of small school districts have a shared superintendent or a part-time superintendent.

“I’m saying that this is happening,” Rabinowitz said of consolidating efforts. “It’s not happening in every school district, but certainly in the majority of school districts.’

The budget document says that the “sharing of of superintendents, staff and services will be developed more broadly by the [the School Services and Redistricting Commission] and will result in cost savings and possible redistricting.”

Lamont’s proposal is likely to spark controversy as did two proposed bills earlier this session that called for consolidation of smaller districts.

Sen. President Martin Looney D-New Haven, who introduced one of those bills, said that he is very much in favor of Lamont’s proposal.

“I was very, very pleased to see this,” Looney said. “I know  he is committed to promoting regionalization … I’m very supportive.”

At a packed hearing that raised Looney’s bill last month, Rep. Gail Lavielle, R-Wilton, said the “distress” she has heard from constituents about possible forced regionalization “has been so great, I’ve never quite seen anything like it.”

“They don’t feel that someone far away should be telling them what to do with their children, or how to shape the institutions in their town,” Lavielle said. “They really feel the school is the soul of their community.”

Betsy Gara, executive director of the Connecticut Council of Small Towns, said Wednesday that she is concerned about language in the proposed budget “that indicates that towns that don’t improve their efficiencies or regionalize services will be faced with cuts in funding because I think that is kind of based on the assumption all small districts are inefficient or utilizing too many administrators when we know a lot of small school districts share administrators or have part time superintendents and have really worked hard to control costs.”

Joe Reardon, superintendent of the tiny district of Union, said Wednesday “when it comes to regionalism and making cooperative efforts, we would love to have the scrutiny of state.”

Reardon said the district contracts for many  services from special education help to payroll  from EASTCONN, a regional education service center and so saves money by not hiring its own personnel for certain needs. The district, which serves only 55 students, has blended grades in pre-kindergarten through Grade 8 and a budget of about $2 million.

Reardon works 1.5 days a week or 65 days a year and the district pays tuition for the students to attend out-of-district high schools.

Reardon suggested that instead the governor look at consolidating staff in his own office or in other departments such as the state Department of Motor Vehicles.

“They are chasing a mouse when they come after us,” Reardon said, “and an elephant is running all around the room.”