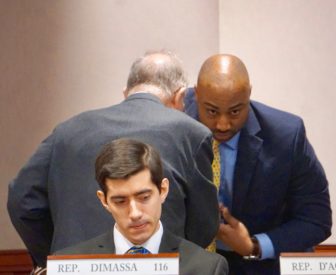 Senate President Pro Tem Martin M. Looney, D-New Haven, cast a chill Tuesday over the nomination of former Goldman Sachs partner David Lehman as commissioner of economic and community development, declining to commit to a vote for Lehman when his confirmation comes before the Senate.

Looney agreed after a 90-minute confirmation hearing to support sending Lehman’s nomination to the Senate floor, but said he remained uncertain about the degree to which Lehman should be faulted for how Goldman Sachs bet against some of its own investors by shorting collateralized debt obligations it sold prior to the 2008 market collapse.

To Gov. Ned Lamont, getting the 41-year-old Lehman to leave Wall Street at mid-career to volunteer as his unpaid commissioner of economic development was a coup, evidence of his administration’s ability to attract new talent to state government. But Looney sees Lehman as still living in the shadow of the 2008 financial collapse.

“I would just say because what happened at that time was so traumatic for the nation and for the state of Connecticut in terms of the housing crisis, the tremendous financial losses that were taken, I just think due diligence on the part of the General Assembly requires a careful analysis of someone who arguably had a role or at least was involved in the activities relevant to that crisis,” Looney said.

The administration is standing by Lehman.

“The governor respects Sen. Looney’s position and will continue to be available to address any questions. Commissioner-Designee Lehman has met individually with each and every committee member over the last few days and looks forward to answering any questions about his background, his qualifications or his vision for economic development for Connecticut,” said Paul Mounds Jr., the governor’s chief operating officer. “With that said, Gov. Lamont unequivocally believes Commissioner-Designee Lehman is the most qualified and capable leader to champion our state’s pro-growth and pro-jobs agenda.”

Mounds huddled with Looney during the hearing by the legislature’s Executive and Legislative Nominations Committee, which voted unanimously to send the confirmation to the full Senate. Neither man would discuss their conversation, but Lehman said he welcomed the questions.

“I think it’s really important to have this type of discussion,” he said after his testimony. “For me to be effective in my role, I think there needs to be a level of trust between me and the legislature and legislators and the governor. So I think this type of discussion, I expected it, and I think it’s really important we get it out right now as opposed to there being some distrust.”

A rejection of a Democratic governor’s nominee led by the Democratic leader of the Senate would be highly unusual. Looney is a member of the Executive and Legislative Nominations Committee, and Senate Majority Leader Bob Duff, D-Norwalk, is the co-chair. Lehman needs confirmation by only one chamber.

It was the Lamont administration’s choice for his confirmation to go the Senate, which was seen as the less risky of the two chambers. The House Democratic majority has a large and unpredictable Progressive Caucus.

Looney said he has not talked to Lamont about his concerns.

At issue is what Lehman knew about the poor quality of collateralized debt obligations, exotic and risky financial instruments known as CDOs, sold by Goldman Sachs to investors. Four CDOs known as Hudson 1, Anderson, Timberwolf, and Abacus 2007-AC1 quickly lost their value, with Goldman Sachs profiting from the failure by shorting them, or betting they would lose value.

Lehman told the committee he well understood how the financial collapse still resonates more than a decade later. 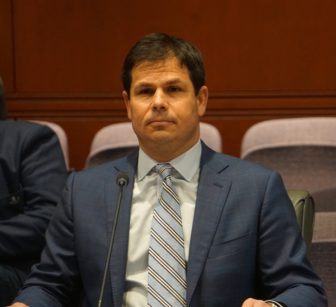 “It was a scary time,” Lehman said. “I have always prided myself in being honest, transparent and forthright with clients and colleagues, and I hope you’ll find those qualities in myself as well. Any suggestion that I knew a product was going to be worthless and subsequently sold it to a client is completely and wholly untrue.”

Goldman Sachs and Deutsche Bank, two major players in the U.S. housing mortgage market, figured prominently in a scathing post-mortem of the financial collapse conducted by the U.S. Senate Permanent Subcommittee on Investigations. U.S. Sen. Carl Levin, who led the inquiry, concluded that all of Wall Street bore some fault.

“The overwhelming evidence is that those institutions deceived their clients and deceived the public, and they were aided and abetted by deferential regulators and credit ratings agencies who had conflicts of interest,” Levin said.

Lehman was among the witnesses called before Levin’s committee. Without naming anyone, Levin accused the firm of being dishonest.

“In my judgment, Goldman clearly misled their clients and they misled the Congress,” he said.

Looney was alone Tuesday among the state senators on the Executive and Legislative Nominations Committee to publicly express doubts about Lehman’ character or qualifications, though several quizzed Lehman about his years at Goldman Sachs.

In the end, he was repeatedly complimented for leaving the lucrative world of Wall Street to take an unpaid post with the state.

“I applaud you for you selflessness,” said Sen. Alex Bergstein, D-Greenwich, who counts Lehman as a constituent.

Sen. Marilyn Moore, D-Bridgeport, called Goldman Sach’s role in the financial collapse “the elephant in the room,” but she did not quiz him on his tenure. She later said she was unsure of how she would vote in the Senate, saying she was eager to consult privately with Looney and Duff.

Other committee members, most of whom had met privately with Lehman before the hearing, seemed satisfied.

But Looney asked about how Goldman came to profit from financial instruments that “turned out to be disasters for others, but not for Goldman Sachs.”

He repeated elements of his opening statement, which was delivered before Looney arrived. “I did not know at the time those securities were going to be worthless,” he said.

By shorting some of the CDOs, he said, Goldman was looking to limit its exposure, not make a trade that ultimately would yield a huge profit.