Legislation would require insurers to submit annual reports on parity 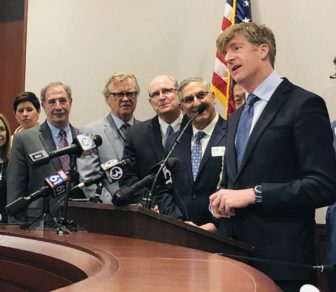 Patrick Kennedy, far right, stood with lawmakers and mental health advocates Tuesday as he encouraged passage of a bill that would ensure parity laws are followed.

But each time Alec relapsed, the family confronted a similar frustration: The difficulty of winning approval from insurance companies to cover rehabilitation.

“As parents, this was a very sad and painful journey,” she said. “Our son was suffering from an insidious disease, and the health care protocols we could turn to were severely inadequate.”

Payments for services were only partially covered, Bhargava said. And upon leaving treatment, there was no transitional plan or support system to help Alec fight the addiction. Last July, on his 26th birthday, he died of a Fentanyl overdose.

Lawmakers are now trying to hold insurance providers accountable for complying with state and federal parity laws by requiring them to submit annual reports detailing their coverage of mental health and substance abuse services. The bill, which is being considered by the legislature’s insurance and real estate committee, also mandates that insurers cover drugs prescribed for substance abuse treatment, and that they cover treatment regardless of whether it is court ordered.

“We can no longer afford to wait to treat behavioral health and physical health as two different things,” said State Rep. Sean Scanlon, a co-chairman of the insurance committee. “When it comes to mental health parity, we don’t have a mechanism to know whether it is being enforced, and that is what this bill is all about.”

The Federal Mental Health Parity and Addictions Equity Act was signed into law a decade ago, barring insurance companies from placing greater restrictions on access to mental health services than on surgical or medical care.

Connecticut’s own parity law took effect in 2000. It required insurers to provide benefits for most mental or nervous conditions defined in the Diagnostic and Statistical Manual of Mental Disorders. But years after its passage, state officials said the bill was no guarantee of practical results. Some psychiatrists were not accepting private insurance, and patients had trouble getting services covered.

On Tuesday, Steve Lichtman, a father from Easton, described his family’s ordeal.

“When my daughter injured her knee in high school and required surgery, our insurer provided good coverage for doctor appointments and physical therapy,” he said. “When she later required mental health counseling, we were often required to pay hundreds of dollars at the time of each session with a psychiatrist or therapist and were later reimbursed about 25 percent for the appointments by our insurance company.”

Patrick Kennedy, a former congressman from Rhode Island who was a crucial backer of the federal parity law, joined legislators Tuesday in advocating for the annual reporting mandate in Connecticut.

There were 1,017 deaths from drug overdoses in Connecticut last year, including 760 from Fentanyl overdoses, data released by the state show.