The fight over $15? It’s over how fast to get there 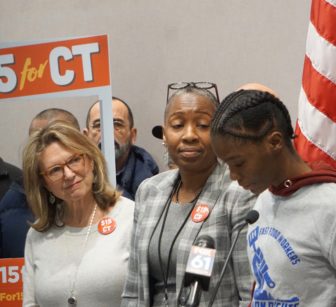 The General Assembly is all but guaranteed to pass a bill this year raising Connecticut’s $10.10 minimum wage in annual increments to $15. Unresolved is how quickly the minimum will reach $15 and whether it should be customized, say to allow employers to pay teenaged part-time workers less than a family breadwinner.

With Democrats controlling the governor’s office and both chambers of the legislature, many  traditional opponents of a higher minimum wage are focused on shaping the bill this year, not killing it. Gov. Ned Lamont is committed to a raise, but his bill is less ambitious than one favored by the co-chairs of the legislature’s Labor and Public Employees Committee.

Lamont favors a phase-in schedule similar to Massachusetts, raising the wage in increments until reaching $15 on Jan. 1, 2023. He also wants more employees to be covered by a lower training wage. Backed by unions, the committee co-chairs favor hitting $15 a year earlier, and they oppose a lower training wage.

“We are actually in discussions with the governor’s office. Nothing’s been written in stone,” said Rep. Robyn Porter, D-New Haven, a committee co-chair. “I think we all know how this works in this building. The bills that get released out of committee are not the bills we end up voting on on the floor. I believe there is plenty of room for negotiations and that we will come to a consensus.”

At a public hearing Thursday, few witnesses defended the sufficiency of the current wage, which yields an annual income of $21,000 to someone who works 40 hours a week, 52 weeks a year. Once the region’s highest, the state’s minimum is lower than in New York, Massachusetts, Rhode Island, Vermont and Maine.

“The governor believes a $15 minimum wage, enacted responsibly and over time, will help the residents of our state provide a better life for themselves and their families. The governor also recognizes the investment that business owners make in new workers, especially those who need to be trained,” said Maribel La Luz, the governor’s director of communications.

The version favored by Porter and her co-chair, Sen. Julie Kushner, D-Danbury, a former regional UAW official who unseated a conservative Republican last year, would eliminate the lower training-and-youth wage and bump the $10.10 wage to $12 in 2020, $13.50 in 2021 and $15 in 2022. They also would peg future increases to the consumer price index.

Many small-business owners seemed resigned to an increase, but complained that a nearly $2 bump in January, as proposed in the committee bill, could not be absorbed.

Keith B. Bishop of Bishop’s Orchards in Guilford, a Republican who has opposed previous increases, asked the legislature to go far slower — and to preserve a lower wage for younger workers new to the job. He says he employed 257 in 2018, ranging in age from 15 to 80, with 173 working fewer than 20 hours a week, mostly teens.

“The increase in the minimum wage must occur over a 5- to 6-year period at a reasonable rate of increase for our agricultural based business to survive and have profits to repay our loans and re-invest in our business,” he said in written testimony. “Three or four years to get to $15/hr is too steep at 19%, 13% and 11% proposed annual increase!”

A majority of workers being the paid the federal minimum of $7.25, a rate exceeded by the state minimums of every northeastern state except New Hampshire, are young and part-time workers, according to the Bureau of Labor Statistics. But advocates of a $15 minimum say the picture in Connecticut and other states with higher minimums is far different.

Quoting the Economic Policy Institute, they say that 57 percent of minimum-wage workers overall are full-time employees, 37 percent are 40 or older and 28 percent have children. 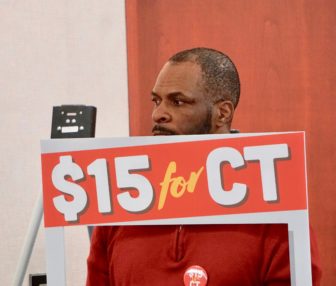 Howard Francis, 49, of Hartford, a housekeeper at Fresh River Healthcare, a nursing home in East Windsor, is among the full-time workers who would benefit from a $15 minimum. He said he is paid $13.50 an hour after 12 years on the job, giving him a weekly gross pay of $540.

He lives with his wife and three-year-old child in an apartment that costs $750 a month. His car payment is $485, and car insurance in the city is expensive.

Rep. Edwin Vargas, D-Hartford, a retired teacher and former officer in a teachers’ union, said it is past time for corporate America, the beneficiary of recent federal tax cuts that he called “a windfall for the wealthy” to share its profits with workers.

Restaurant and other small-business owners pleaded for the legislature to consider how a 50-percent increase in the minimum wage phased in over three or four years would affect them, not just retail giants like Wal-Mart.

“I feel a lot of this legislation is pitched with the big-box industry in mind, where there are deep pockets and they feel those employees are not treated as well as they could be,” said Kenneth Beaulieu, the second-generation owner of the Main Pub in Manchester.

A $15 minimum wage, which would apply to only a portion of his 42 employees, would cost him $70,000, he said. Restaurants have their own lower minimum wage for employees who make most of their money from tips. He said tipped employees can make more than $20 an hour.

Connecticut’s tipped minimum wage of $6.38 for wait staff and $8.23 for bartenders is double what is required in many states, including Massachusetts and Rhode Island. Unless exempted, to goes up with the regular minimum wage. A 2015 survey by the Office of Legislative Research found Connecticut’s tipped wage to be the highest in the U.S.

Rep. David Rutigliano, R-Trumbull, a restaurant owner who sits on the labor committee, said a $15 minimum wage would make it difficult for teens and others to find entry level jobs, but he conceded that many adults working full-time are either paid the minimum wage or close to it.

“I appreciate that some people later in life are still on it, and it’s not enough,” he said.

The part-time legislature has other small business owners who testified, including a Democrat in support of a higher minimum and a Republican who acknowledged some increase was inevitable.

“I understand  as a small business person that a minimum-wage increase is coming,” said Sen. Paul Formica, R-East Lyme, owner of the Flanders Fish Market and Restaurant. “There’s nothing we can do, but I’d like to see some opportunities to benefit the business community as an offset to that.”

Rep. Joshua Elliott, D-Hamden, a member of the legislature’s Progressive Caucus who owns health-food stores in Shelton and Hamden, said he pays starting workers $10.50 and some employees at $15, but favors increasing the minimum to $15 over time, saying he could absorb the increase by a mix of price increases, efficiencies and a smaller profit margin.

“It’s very difficult to be a business owner and progressive in this environment,” he said.

The Connecticut Community Nonprofit Alliance, which represents more than 300 organizations and employs a half-million people, reminded legislators that many of its members rely on state contracts whose rates have not gone up in years.

The Connecticut Coalition Against Domestic Violence favors the increase as empowering many of the women they serve. But they also noted that they provide services to violence survivors through state contracts that do not increase when the minimum wage goes up.