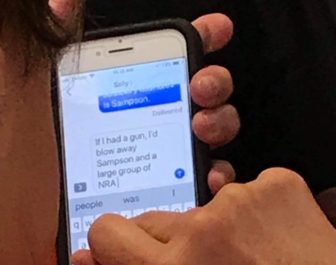 A photo of a gun-control advocate writing a text to her daughter, police said

State Capitol police expelled an unnamed gun-control advocate from a public hearing Monday after someone photographed her sending a text message in which she imagined shooting NRA members and a legislator opposed to gun control.

Police Chief Walter Lee said police concluded after an investigation there was no probable cause to charge her with threatening.

“If I had a gun, I’d blow away Sampson and a large group of NRA,” read the text, photographed before it was finished.

Sen. Rob Sampson, R-Southington, is a member of the Judiciary Committee, which heard testimony on seven gun bills Monday. An opponent of gun-control bills, Sampson questioned proponents about their constitutionality and efficacy.

The text was sent to the women’s daughter, not a lawmaker or NRA member, Lee said. She does not own a firearm.

The woman was apologetic and left without incident after being questioned, police said.