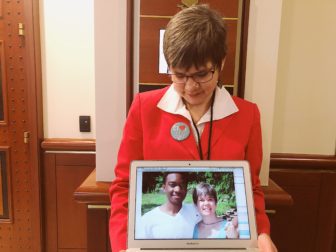 State Rep. Anne Hughes, D-Easton, holds a picture of her godson, Hamed (left), to whom she donated a kidney in 2015.

When Anne Hughes learned that her godson was in late stage kidney failure, she jumped on a train to Washington D.C. and volunteered for a round of testing.

She was a match. But the transplant surgery she then underwent cost her two weeks of pay.

Hughes, a state representative from Easton, recounted the ordeal to fellow lawmakers Tuesday as she pressed for paid family and medical leave. A measure that would allow workers to receive up to 12 weeks of paid leave per year to care for a sick family member is being weighed by the legislature’s Labor and Public Employees Committee. Two similar bills have already cleared the committee; one is headed to the House and the other to the Senate.

A vast group of concerned workers called Tuesday not only for passage of the proposal, but also for an expanded definition of what it means to be a family member.

Hughes, who has no children, considers her 20-year-old godson a close loved one, or what advocates call “chosen family.”

Advocates urged legislators to revise the bill’s language to feature a more “inclusive” explanation of family – one that takes into account partners or friends who don’t have legal or biological ties.

“Many of my constituents create chosen family – a close network of friends who serve as the equivalent of a family relationship,” said Robin McHaelen, head of True Colors, an LGBTQ support group. “This is true across the lifespan for LGBTQ folks. Youth are more likely to be homeless or rejected by their families of origin, compelling them to create ‘chosen’ families.”

Older adults from the LGBTQ community are nearly twice as likely to live alone as people outside that community, she said. Many rely on close friends in an emergency.

“Paid family and medical leave should be accessible to all, which means supporting workers who may not fit into a traditional, nuclear definition of family,” Liz Gustafson, an organizer and volunteer coordinator for NARAL Pro-Choice Connecticut, said. “Ensuring the definition of family includes ‘chosen family’ would mean no one is left behind.”

The pool of money set aside for paid family and medical leave would be financed by a 0.5 percent payroll tax and would reimburse employees at a rate equal to 90 percent of their base salary. The two other paid leave bills suggest benefits equal to 100 percent of workers’ pay – up to $1,000 per week.

The tax would be levied no later than October 2020. Employee compensation would be available beginning in January 2022.

Detractors of paid leave have raised concerns about the solvency of the fund established under the legislation, and business leaders said the bills would hurt companies by forcing them to deal with immense costs and prolonged absences.

Eric Gjede, vice president of government affairs for the Connecticut Business and Industry Association, highlighted the pitfalls of a paid leave mandate during an earlier public hearing.

“What you’re asking from us to take … in terms of cost and burdens simply cannot be done by a significant number of Connecticut’s small businesses,” he said.

Behind the scenes, the Lamont administration and legislative staff are working to ensure the sustainability of the program, relying in part on an actuarial analysis by the Institute for Women’s Policy Research that was commissioned by the General Assembly in 2015.

“I think it gives us a great head start,” said Jonathan Dach, the governor’s deputy chief of staff. “We can rely on real actuarial math so we can look people in the eye and say this is what it’s going to cost.”

Paid family and medical leave programs essentially are disability insurance policies. The major variables under study are the number of employees who might use the benefit, how much time off would be covered, and the level of wage replacement.

Dach said the governor has set one non-negotiable item: It would be funded by a payroll tax on employees that could not exceed one-half of one percent of weekly pay.

The administration and legislature agree on a goal of providing up to 12 weeks off, with Lamont now considering wage replacement of as much as 90 percent for lower-wage workers and a lower percentage for higher-wage workers. Legislators are seeking a maximum replacement wage of 100 percent.

The actual level of wage replacement most likely would be resolved by the continuing analysis by actuaries of how generous a benefit the fund could afford.

Lindsay Farrell, the executive director of the union-backed Working Families Party, said she sees the administration working in good faith to provide the best benefits at an affordable and sustainable cost. A generous benefit that was actuarially unsound would serve no one, she said.

“The worst thing would be for the fund to go insolvent in four years,” she said.

But she said the wage-replacement benefit for lower-wage workers must be high — or they will not be able to utilize the program.

Under either version, the Connecticut program would be among the most generous in the U.S.

California, New Jersey and Rhode Island were described in the 2015 study as providing no more than six weeks coverage for family care, paying replacement wages between 55 percent and 66 percent.

Dach said the Connecticut benefits are tracking those of plans more recently approved in Massachusetts and Washington. California also has improved its benefits since the 2015 study, he said.

“We feel like we’re in line with the other states that have moved recently,” Dach said.