Lawmakers call for end to religious exemption on vaccines 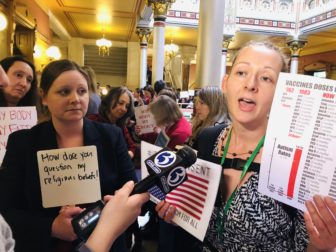 Activists, including Kate Kraemer of Griswold, left, decried a proposal to repeal the religious exemption on vaccines.

Lawmakers, including House Majority Leader Matthew Ritter, took aim Wednesday at the state’s religious exemption to vaccines, calling for a vote to repeal the provision and claiming that only a small but vocal group has argued to let it stand.

Ritter cited concerns for school-aged children who cannot receive vaccinations because of immunodeficiencies, and pointed to other states, like California, Mississippi and West Virginia, that have eliminated the exemption.

“Here is the situation we’re faced with: You have hundreds, if not thousands, of kids with compromised immune systems who are entering kindergarten with no knowledge of who sitting beside them has not been vaccinated,” he said. “Who is going to speak for those kids?

“You have the medical community coming to us saying, ‘Why do you have this exemption when other states are getting rid of it?’”

There is currently no bill before the legislature to repeal the exemption. Ritter said he hopes to introduce one within a year or amend other legislation to include it.

State Rep. Josh Elliott, D-Hamden, said a contingent of the skeptics are “vaccine averse” – they aren’t opposed to immunizations, but they need more information.

“It’s a very small percentage of people that are outspoken against eliminating the religious exemption,” he said. “We need to make sure we’re listening to the parents … whose children either have immunodeficiencies and cannot get vaccinated, or they just don’t want their children around other children who have not been vaccinated.”

The repeal would not force children to be immunized. It would prohibit children who are not vaccinated on religious grounds from enrolling in the state’s public schools.

Connecticut’s vaccination rate has traditionally been high. In the 2017-18 school year, the most recent data available, more than 96 percent of the state’s kindergarteners were vaccinated against polio, diphtheria, measles, mumps, rubella, Hepatitis A and B and varicella. Between 95 percent and 98.5 percent of seventh graders were immunized against those conditions and meningococcal disease.

Only about 2 percent of kindergarteners and 1 percent of seventh graders were not vaccinated for religious reasons. Others were exempt for medical reasons.

Despite that, state Rep. Liz Linehan, D-Cheshire, said people in her community are clamoring for the religious exemption to be removed. 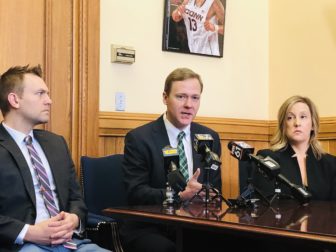 “The overwhelming majority of people that I represent and around the state of Connecticut that have reached out to us said they agree with getting rid of the religious exemption,” she said.

As legislators discussed their position Wednesday, dozens of protesters gathered outside Ritter’s state Capitol office. They waved signs reading “Connecticut – the medical tyranny state” and “My Body. My Faith. My Choice.” and criticized lawmakers for shutting the public out of their press conference.

The Rev. Ernestine Holloway, a one-time Republican candidate for state representative, condemned Ritter for seeking to repeal the religious exemption. She said she has heard from Muslims, Pentecostals, Lutherans and Presbyterians who are worried about the move.

Kate Kraemer of Griswold, who has a 5-year-old daughter and is pregnant with her second child, said she felt ignored and belittled.

“It’s up to public health legislators to protect us and our children, even if we don’t have the same religious beliefs,” said Kraemer, who identified as Catholic.

Rep. Vincent J. Candelora, the deputy House minority leader, objected to Ritter’s proposal. The legislature’s Public Health Committee declined to raise a religious exemption bill for a public hearing, and Candelora said that should place the issue off limits until next year.

He said the decision to vaccinate children should rest with parents on consultation with their pediatricians, and the push in Connecticut and other states to curb exemptions is an overreaction to recent measles outbreaks.

“This hysteria of let’s rush to vaccinate everyone and everything, to me, is equated to the Salem Witch Trials and really misses the mark,” Candelora said.