Is Connecticut ready for iLottery? 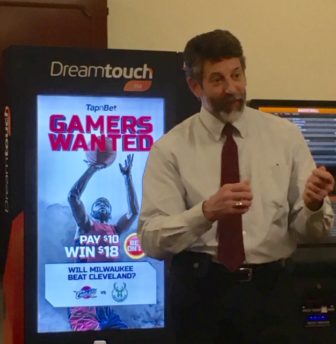 Greg Smith, the CT Lottery’s president, in front of a sports betting terminal.

The future of gambling was on display Friday in two conference rooms at a suburban office park, home to CT Lottery. Two vendors demonstrated free-standing terminals and mobile applications that could allow gamblers to buy lottery tickets and place bets on sports from, well, just about anywhere.

On Tuesday, the legislature’s Public Safety and Security Committee will try to take the first step at shaping that future, voting on a relatively straightforward bill to allow limited lottery sales online and a second measure addressing the far more complicated question of who should get the rights to sports betting.

CT Lottery, which turns a $330 million profit for the state on more than $1.2 billion in annual sales of instant tickets, KENO games and daily and weekly drawings, wants authorization to sell tickets to drawings on its web site and through smart-phone applications. Michigan boosted its sales by $100 million going digital.

“This is the future of lotteries,” said Rep. Joe Verrengia, D-West Hartford, co-chair of the public-safety panel, which has jurisdiction over gambling legislation.

Sports betting is enmeshed in the larger, complex question of whether or not bookmaking is a casino game, the exclusive province in Connecticut of the two tribal casinos, Foxwoods and Mohegan Sun.

The administration of Gov. Ned Lamont is trying to negotiate an agreement with the tribes that would resolve rights to sports betting and the most intensively lobbied issue in recent years, casino expansion.

Even if implementation must await a larger deal, Verrengia wants the committee to approve a structure for sports betting: Offering three licenses for sports betting online and at bricks-and-mortar outlets, such as current OTB parlors, sports bars or other retailers. CT Lottery intends to be one of those bidders.

The committee’s deadline is not until Thursday, but Verrengia’s goal is to finish work on its gambling proposals Tuesday. One of those proposals is Verrengia’s call for the creation of a State Gaming Commission that he says would give Connecticut in-house expertise on the increasingly complicated world of legal gambling.

Currently, a division of the Department of Consumer Protection oversees gambling.

The administration is taking no public stand on Verrengia’s plans.

Other states have quickly embraced sports betting since the U.S. Supreme Court struck down a federal law that had allowed it only in Nevada and, to a limited degree, Delaware. Sports books are now available in New Jersey, Pennsylvania, Rhode Island, West Virginia and Mississippi. New York has legalized it and expects to offer it by the summer.

“It’s a gold rush, isn’t it?” said Charles Cohen, the vice president for sports betting at IGT, which does business in all those states.

IGT and a competitor, Intralot, have been demonstrating their machines and smart-phone applications for lawmakers, staffers and DCP officials at the lottery headquarters in Rocky Hill.

Officials from both companies and the lottery said the gambling market is ripe for expansion.

Michigan’s retail sales at convenience stores and other outlets continued to increase even after online sales began and quickly blossomed into a $100 million market.

“There is no cannibalization at all,” said Fernando Ors, the president of sports betting at intralot.

Overall, the Michigan Lottery returns nearly $1 billion in annual profits to the state.

Online users must register, showing proof of age with a drivers’ license that is scanned. Protections against compulsive gambling include self-set limits and restrictions on credit. Ohio limits players to $100 a week in credit or debit purchases.

“Every purchase online has a ‘responsible gaming’ feature,” said Greg Smith, the president of CT Lottery.

One of the terminals displayed Friday was geared to the sports-betting newcomer. Bets are placed on a touch screen. The bettor chooses a game and the amount of the bet, then the terminal instantly computes the payoff, based on the current odds on the game in question.

Sports betting in Connecticut is complicated by the state’s relationship with the Mashantucket Pequots and Mohegans, owners of the two casinos in eastern Connecticut. In return for exclusivity, the tribes share 25 percent of their gross slots revenue, which is estimated to produce about $250 million for the state this fiscal year.

The tribes won authorization in 2017 to jointly develop a commercial casino in East Windsor to blunt the loss of market share to the MGM casino in nearby Springfield. MGM has successfully lobbied the Trump administration to withhold federal approval.

In the meantime, MGM has urged Connecticut to open the state to commercial competition, proposing a Bridgeport casino.

Verrengia understands sports betting is intertwined with the the larger casino issues, but he believes the legislature can position the state to move quickly if the tribal exclusivity issues are resolved.

“We’re certainly not going to have enough time to fully vet this issue before the deadline,” Verrengia said. “My hope is to get both bills out of committee so we can continue to work on these issues.”