Millstone deal reached, set to run for another 10 years 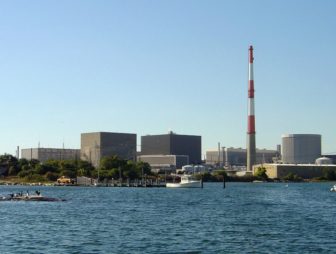 The Millstone Nuclear Power Station will stay open for another 10 years – a prospect that had been in some doubt recently even after it was selected in December as a winner of the final carbon-free energy competition by the Malloy administration.

Dominion, Millstone’s owner, had been negotiating with Connecticut’s two utilities – Eversource and United Illuminating – against a March 15 deadline for coming up with a long-term contract to purchase Millstone’s power. The contract was announced just hours before the deadline was set to expire.

Dominion threatened to shut the plant’s two units in 2023 if an agreement wasn’t reached today. That would have stripped 2,100 megawatts of carbon-free power from New England’s electric grid, including about half of Connecticut’s power. That loss would have made it difficult, if not impossible, for the state to meet its long-term clean energy and greenhouse gas emission reduction mandates.

“The loss of Millstone would have been catastrophic for our state and our region,” Gov. Ned Lamont said in a statement announcing the agreement. “The shutdown of the plant would have exposed the New England region to a nearly 25 percent increase in carbon emissions, increased risk of rolling blackouts, billions of dollars in power replacement costs, and the loss of more than 1,500 well-paying jobs.”

Paul Koonce, president and CEO of Dominion’s power generation group, issued a statement calling the agreement “a huge win for Connecticut, the region, and our colleagues at Millstone.”

It was assumed after December’s announcement that a contract was assured, but difficulties subsequently arose. The details of the new deal have not been made public, according to Millstone spokesman Ken Holt.

Dominion’s first threats to close the plant were in 2016. The company complained that the plant was no longer competitive against the extremely low-priced natural gas powering most of the electric plants in the region. The licenses of its two units run out in 2035 and 2045.

The question of whether Millstone was genuinely at-risk of closing was debated for nearly two years and, in late 2017, the legislature finally gave the Department of Energy and Environmental Protection permission to authorize including Millstone in clean energy procurements. The Public Utilities Regulatory Authority, PURA, ruled that the plant could be deemed at-risk, though it indicated that it would not be in danger of closing until 2022.

The procurement parameters announced in December gave Millstone a 10-year contract, the first half of which would be as a not-at-risk source. The second half, beginning in 2022, would be at-risk. Reports indicated it was the second half of that contract that caused the snag prior to the last-minute resolution.

In announcing the agreement, Lamont also revealed he has signed a “statement of cooperation” with the other New England governors to work toward coordinating the various states’ renewable energy goals with the overall needs and reliability concerns of the grid.

4 thoughts on “Millstone deal reached, set to run for another 10 years”