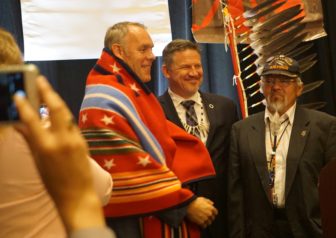 With its former leader facing a criminal investigation of potential political influence, the U.S. Department of Interior abruptly reversed course Thursday and announced it has accepted a gambling amendment necessary for the Mashantucket Pequot and Mohegan tribes to jointly construct a casino in East Windsor to compete with MGM Springfield.

The terse notice posted on Interior’s web site at 11:15 a.m. gives no rationale for the reversal, saying only that after “further consultations with the Tribe,” the assistant secretary for Indian Affairs signed off on the document on March 15 and that it would become effective after its publication Monday in the Federal Register. The DOI had no  comment.

The notice removes a key obstacle to the construction of Connecticut’s first casino off tribal lands, but it invites the certain revival of a legal challenge by MGM Resorts International of the state’s authorization of the East Windsor casino without competition. MGM’s original lawsuit was dismissed as premature, but that no longer is the case.

MGM said Thursday it will resume its court fight, which claims that Connecticut’s authorization of an off-reservation casino without competitive bidding was unconstitutional.

“The Attorney General’s office has repeatedly warned, as recently as last year, that pursuing a no-bid approach in East Windsor would expose Connecticut to significant legal risks,” Uri Clinton, a senior MGM executive who has led the lobbying effort, said in a statement. “As MGM has always stated, we will continue to pursue all legal options, including litigation, to defend our right to compete in Connecticut.”

Despite the litigation threat, the leader of the Pequots was exultant.

“Today is a great day for the Mashantucket Pequot Tribal Nation and the State of Connecticut, especially given our 400-year history together,” said Rodney Butler, chairman of the Mashantucket Pequots. “I applaud the actions of the Department of Interior and extend my sincerest gratitude to Assistant Secretary Tara Sweeney and the Office of the Solicitor at the Interior Department for their assistance in resolving this matter.

“Now that the approval of our Amendment is secured and our exclusivity agreement with the State of Connecticut is reaffirmed, we will move forward with construction on Tribal Winds Casino in East Windsor and preserve much needed jobs and revenue.”

No statement was offered by the Mohegans or MMCT, the two tribes’ joint venture behind Tribal Winds.

The state’s approval of the East Windsor casino was contingent on federal acceptance of changes to Connecticut’s longstanding gambling agreements with its only two federally recognized tribes, which give them exclusive rights to casino gambling in return for a 25 percent share of the slots revenue at Foxwoods Resort Casino and Mohegan Sun.

The tribes repeatedly have called the East Windsor project “shovel ready,” but they do not have construction financing. Both tribes already are heavily leveraged, and their revenues have fallen in the face of increased competition from casinos in New York, Massachusetts and Rhode Island. The Mohegans, however, are generally seen as having stronger finances than the Pequots, and their partnership says they can get financing.

The decision by Interior comes as Gov. Ned Lamont is trying to negotiate a universal settlement with the tribes, MGM and others about how to proceed on casino expansion and sports betting without further litigation. The administration and tribes have not resolved the tribes’ claim they have sole rights to sports betting, which they consider a form of casino gambling, and should be compensated if Connecticut wishes to license its OTB parlors, CT Lottery or anyone else to take wagers on sports.

“Approval of these amendments ensures that any state law authorizing MMCT to operate a commercial casino off of the tribal reservations will do no harm to the state’s existing revenue sharing agreements with the tribes,” said Maribel La Luz, the governor’s communications director. “We remain committed to working with the tribes toward a global resolution of all outstanding legal issues or obstacles that may arise out of this decision, including any lawsuits third parties may bring against the state law that now authorizes MMCT to operate a commercial casino in East Windsor.”

MGM broadened the field of play in 2017. About the same time that Interior surprised the tribes by withholding approval of the gaming agreements, MGM announced it would compete for a license to build a casino in Bridgeport if the state allowed it. By promising to hire from New Haven and Bridgport, MGM quickly assembled a coalition enhancing its influence in the General Assembly.

“While we assess the planned Interior Department publication, the fundamentals haven’t changed,” Clinton said Thursday. “MGM remains steadfast in our view that Bridgeport is the best location in Connecticut for a commercial casino if the state is to maximize jobs, economic growth, tourism, and revenue – and a transparent, competitive process is in the state’s best interest.”

But the fundamentals have changed.

In January, MGM closed an $850 million deal to buy the Empire City Casino in Yonkers, about a 45-minute drive south of Bridgeport. Located at the Yonkers horse track, Empire City is a “racino,” a facility licensed to only offer slots and and other electronic gambling devices. MGM is expected to develop it as a full casino if New York allows it after the expiration of a moratorium on casino expansion in downstate New York in 2023.

Gambling issues are complicated in Connecticut by the de facto partnership of the state and the two federally recognized tribes, sovereign governments with the right under federal Indian gaming law to offer any form of gambling otherwise allowed in the state.

Their exclusivity agreement with the state has produced billions in slots revenue for Connecticut over the years, topping $430 million in 2007, the year before the recession. With new out-of-state competition, the slots payments to the state have fallen precipitously. They are projected to be $250 million this year, then drop next year due to competition from a casino resort scheduled to open this summer outside Boston. 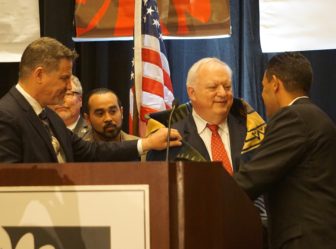 James E. Cason accepting a gift of a blanket from Kevin Brown of the Mohegans and Rodney Butler of the Pequots.

The tribal owners of Foxwoods and Mohegan Sun have been locked in a bitter and expensive lobbying fight with MGM in Hartford and Washington over market share in an increasingly competitive gambling market in the Northeast.

The tribes won the first round in 2017, convincing the General Assembly to pass legislation that effectively gave them a commercial casino license to build in East Windsor, a short distance from Springfield. Where MGM lost in Hartford, it won in Washington.

Records obtained by CT Mirror and others under the Freedom of Information Act showed that Zinke and James E. Cason, the Interior Department’s point man on off-reservation casinos, met at the White House on Sept. 14, 2017 with President Trump’s deputy chief of staff, Rick Dearborn. The next day, the Department of Interior notified the tribes it no longer saw any reason to accept or reject amendments to their gaming compacts with Connecticut, a seemingly innocuous stance with a devastating effect for the tribes.

U.S. Sens. Richard Blumenthal and Chris Murphy and U.S. Reps. John B. Larson and Joe Courtney requested an investigation by the inspector general’s office, and the Washington Post reported in February that a grand jury was investigating Zinke for potentially lying to investigators. Zinke resigned in December.

“Today’s action by the Department of the Interior is welcome news, albeit long overdue,” the senators and congressmen said in a statement. “The Department had failed to approve these amendments to the Mashantucket Pequot Tribe Gaming Procedures for nearly two years—long since staff at the Bureau of Indian Affairs recommended an approval. This unnecessary and unethical delay has prompted a grand jury investigation, which remains ongoing, and an inspector general review of the department’s actions. We look forward to their findings.”

The Interior Department had partially relented in May, accepting an amendment to the Mohegans’ gaming compact with Connecticut. But Zinke refused to act on the Mashantucket Pequot amendment, saying it was unnecessary due to technicalities relating to how Connecticut’s original compact was completed a quarter-century ago.But, as officials at the Bureau of Indian Affairs in Interior well knew, that would block construction under the terms of the 2017 state law.

The previous suit by MGM, which was filed before passage of the authorization bill in 2017, claimed that the state could not exclusively deal with the tribes on a commercial casino license without violating the Equal Protection and Commerce clauses of the U.S. Constitution. It was dismissed as premature.