Uber bill gets a Lyft

Proposal would guarantee drivers 75 percent of each fare 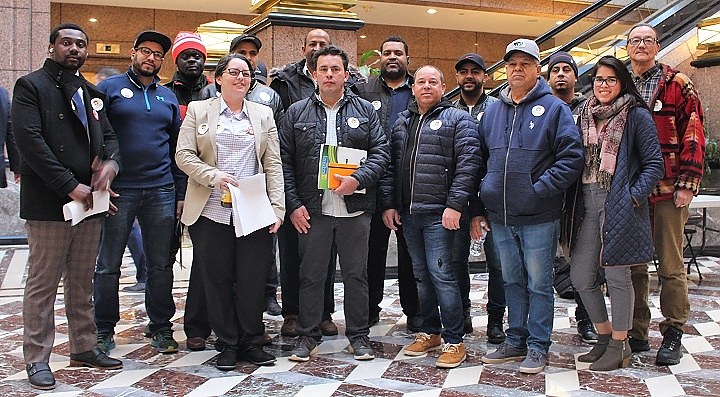 Uber and Lyft drivers are closer to taking home a larger share of each ride’s pay thanks to a favorable committee vote in Hartford last week.

Two dozen local Uber and Lyft drivers traveled to Hartford earlier this month to lobby in support of the bill, which would require Uber, Lyft, and other on-demand ride share services to pay their drivers at least 75 percent of the amount collected from passengers on any given completed ride. It would also restrict the companies’ own share to no more than 25 percent of the total amount of money collected by one of their drivers on a given day.

In written testimony submitted to the committee, Uber opposed the bill, arguing that it often pays drivers more per ride than what it receives from customers. An Uber spokesperson also warned that the passage of this bill could result in ride share drivers, who are not employees but independent contractors with Uber, having to pay thousands of dollars more per year in insurance payments currently covered by Uber.

Tuesday afternoon’s committee deliberations revolved around a debate between the Republican and Democratic members of the committee over whether the proposed bill would hurt customers, drivers, and the companies themselves through higher prices and fewer rides, or whether it would simply result in a fairer share of pay being distributed to the laborers of the ride share economy.

“I think it’s going to result in higher fares and less work for the drivers,” he said.

New Haven and Hamden State Rep. Robyn Porter, House chair of the committee, disagreed. From her perspective, this bill is all about fairness.

“I don’t think that people that provide a profit for companies should be treated in a way that doesn’t coincide or commiserate with the profits that the companies are receiving,” she said.

“There should be equity,” she added. That’s the goal of the bill. In response to Perotta’s concern that the bill would in fact hurt the drivers, she referenced the four Uber drivers who testified in person before the committee earlier this month.

“The drivers seem to think that this is something that would work and would answer some of the problems they’ve been having with the companies,” she said. And if Perotta is concerned about this bill hampering profits for Uber and Lyft, he should remember that this proposed bill arose from drivers’ concerns that their own “profits have been hampered down” by the companies.

Porter said that committee members planned to meet with representatives from Uber and Lyft on Tuesday afternoon to talk with them directly about concerns they have with the proposed legislation.

Now out of committee, the bill advances to the full state House and Senate for review and a final vote.

This story first appeared in the New Haven Independent on March 20, 2019.