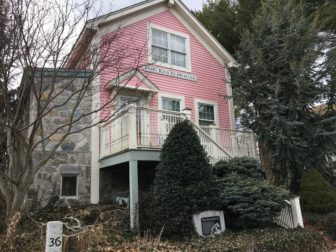 The “Little Pink House” that became the focus of the eminent domain fight over the Fort Trumbull redevelopment effort.

For the first time in more than a decade, a Connecticut legislative committee approved a bill to restrict public taking of private land for economic development purposes.

But the bill — which cleared the Planning and Development Committee Friday by a vote of 15-6 — faces an uncertain future.

Crafted by the Republican minority, the measure drew criticism from Democratic leaders of the panel, including one who backed it temporarily but is openly skeptical the measure is ready to advance further.

“I’m not certain that this will continue forward past today,” said Rep. Cristin McCarthy Vahey, D-Fairfield, co-chairwoman of the committee. “There are some valid legal concerns. We do need to make sure we’re properly balancing our need to provide economic development” against personal property rights.

The bill essentially would prohibit state and municipal redevelopment agencies from using eminent domain to take property to be used as part of a private development project.

In the 2005 landmark case of Kelo v. City of New London, the U.S. Supreme Court upheld the city’s taking via eminent domain of private property for public use — even though it was to be made available for a private development featuring condominiums, offices, a hotel and conference center.

The court held that the economic growth the community might enjoy qualified as a permissible “public use” for the property under what is known as the “Takings Clause” within the Fifth Amendment to the U.S. Constitution. 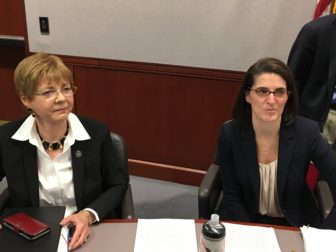 More than 40 states tightened their eminent domain laws since then. Connecticut restricted but did not ban the use of eminent domain to acquire private properties in 2007.

Forcibly taking property not needed for a more direct public use — such as a highway or a solid waste landfill — Republican lawmakers argued, is wrong.

“The shock of the Kelo decision … has never really subsided in many communities, that the government can just take your house, that you’re using, that you’re taking care of, and give your property to a shopping center,” Dubitsky added.

But Rep. Steven Stafstrom, D-Bridgeport, who opposed the bill, asked what happens when an abandoned factory or blighted property lies undeveloped.

“This (bill) totally eliminates economic development as a tool to redevelop our urban areas,” he said.

McCarthy Vahey said she voted for the bill in committee to enable supporters to continue working on the measure, and she also remains open to discussions. But McCarthy Vahey added that concerns about the bill’s ability to hinder economic development are significant.

Cassano, a longtime mayor of Manchester in the 1990s and early 2000s, said economic development is a vital, complementary component to many transportation projects.

For example, when the aging, elevated section of Interstate 84 in Hartford eventually is replaced, it likely would be part of a larger redevelopment program for the city, Cassano said.

“I don’t want to pass anything that could possibly be a drawback to that,” he said.

Rep. Tami Zawistowski of East Granby, ranking House Republican on the committee and one of the bill’s sponsors, said she believes there is room to compromise.

“I would be glad to have the conversation to allow this to work a little bit better,” she said.

But Zawistowski also was cautious about predicting how far the bill would get before the regular legislative session ends on June 5.

“I don’t know,” she said. “I was actually delighted that the committee was willing to take it up this year.”