$100 million donation will be matched by state funds

Gov. Ned Lamont addresses the audience in East Hartford. At right are Ray and Barbara Dalio.

State government will match the Dalio Foundation’s $100 million donation over the next five years, and work with that group to raise yet another $100 million from other philanthropic groups, Lamont said. The funds will be focused on communities with a high poverty rate and a high concentration of youth.

“I love public education. I’m always humbled and inspired by everything you do,” Barbara Dalio,  who leads the foundation, told hundreds of students, teachers and administrators gathered at East Hartford High School to announce the contribution. “You are amazing.”

Ray Dalio, who heads the world’s largest hedge fund, Bridgewater Associates, said he grew up in a “lower-middle class” household and was fortunate “to have parents and teachers who cared for me.” Forbes reports his net worth at about $18.4 billion.

“Basically, all you really need,” he added, “is a good public school education with people who care about you —  and then marry a good wife.”

“The most important investment I can make as a governor … is investment in education, to make sure the next generation is ready to go,” Lamont said.

The new governor, who is trying to close major projected budget deficits in each of the next two fiscal years, said he had no choice but to propose a lean spending plan in February. But this partnership with private philanthropy, he said, will help ensure Connecticut students still enjoy a first-class education.

“We’re here for you,” he said. “We believe in you and we’re going to be fighting for you each and every day.”

The partnership will focus funding on urban, suburban and rural districts. It will place an emphasis on public-private partnerships, programs that serve disconnected youth, as well as initiatives aimed at economic development. 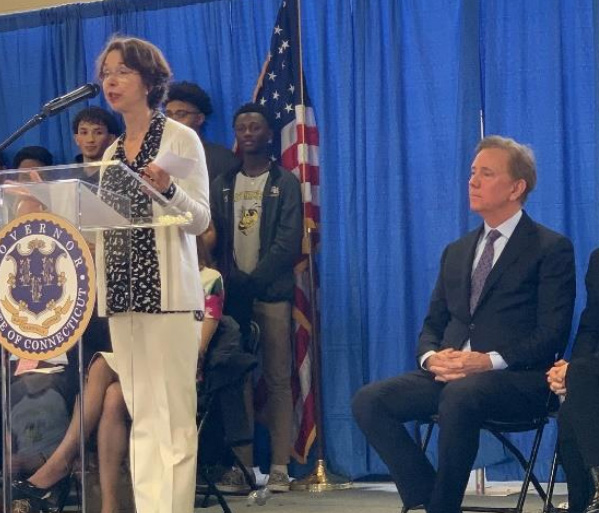 Barbara Dalio at the podium.

Commissioner of Education Dianna Wentzell said the partnership  “represents and confirms the state’s commitment to fulfill the promise of equity and excellence for all Connecticut students by bringing together a diverse set of stakeholders to provide the support, resources and pathways necessary to create learning environments that engage students and transform the educational experiences and outcomes of thousands of young people across the state,  especially traditionally underserved students and communities.”

For example, partnerships with community-based entrepreneurs could be formed to create new mentorship programs for students, according to Lamont’s office. Nonprofits, high schools and colleges might work together to connect graduates with new jobs in cutting-edge fields.

Two local students joined Lamont in the announcement, offering stories about how a quality education in Connecticut has changed their lives.

Stephanie Sesenu, an 11th grader at East Hartford, said she was exposed to gang violence and a poor learning environment when her family first came to the U.S. from Ghana, settling in the Bronx.

But when they moved to East Hartford, local educators “gave me my passion, my true desire in life,” to pursue cultural studies.

Luis Cruz, a 12th grader at East Hartford High and a member of its leadership program, said the connections and mentoring he has received have changed his approach to life from shy and reserved to “brave, open and confident.”

“I’m in a good place where I am accepted for every single part of me,” said Cruz, who added he’s become “a spokesman for my Latino community and my LGBTQ plus community.”

[Many times the “plus” is added in references to the lesbian, gay, bisexual, transgender and questioning community to emphasize that it always will be inclusive.]

Lamont added that the first $20 million installment of state government’s $100 million match to the Dalio foundation contribution will come from the state’s fiscal reserves.

Connecticut currently has $1.2 billion in its rainy day fund, and analysts project the reserve could exceed $2.2 billion by the fall.