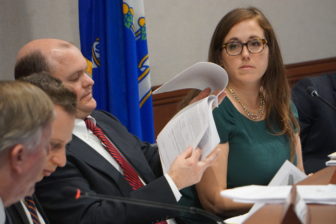 Proponents of legislation that would toughen Connecticut’s sexual assault and harassment laws won a victory Wednesday with the Judiciary Committee’s passage of the so-called Time’s Up bill.

The measure would broaden the mandate for sexual harassment training, requiring all workplaces with three or more employees to provide the instruction to every worker.

Currently, employers with 50 or more workers must offer sexual harassment training, and the edict only applies to supervisors. The state’s Commission on Human Rights and Opportunities would create a video and other online material to satisfy the new training requirement.

Sen. Dennis Bradley, D-Bridgeport, said he watched his mother, who worked as a secretary when he was a child, fend off unwanted advances.

“Those days where I had to go to work with her, to see how she was harassed as a woman in the workplace – I think this is not only progressive legislation in protecting women, but it also doesn’t put much of an incumbent on an employer to make sure that people have the sensitivity and the knowledge as to what’s acceptable in the workplace these days,” he said.

Some Republicans took issue with the bill’s stringent training requirements for businesses, especially small companies. They also expressed concern over what they described as a lack of due process for people accused of harassment.

“We are among the lowest in terms of the period of time we allow victims of sexual assault access to justice in the country,” said Sen. Mae Flexer, D-Killingly, a key backer of the legislation. “This bill will move Connecticut in line with many other states.”

Others worried about the implications of abolishing the statute of limitations for some offenses.

“I think the proposal before us is very, very well intended … but the way that it’s currently written is impractical,” said Rep. Rosa Rebimbas, R-Naugatuck.

Rebimbas questioned how an employer would be able to prove to CHRO that its workers had viewed the sexual harassment video and other training materials.

The measure also would extend the amount of time people have to file workplace discrimination complaints with CHRO after an incident, to 300 days, up from 180. Likewise, it lengthens the period of time victims have to file a case in court after its release from CHRO, to two years, up from 90 days.

A similar effort to overhaul Connecticut’s sexual assault and harassment laws failed to clear the General Assembly last year. A watered-down version, dubbed the “Time’s Up Act,” passed the Senate but did not get called in the House.

Critics at the time struggled with erasing the statute of limitations for certain crimes, and lawmakers were fearful about the demands a stepped-up harassment training mandate would place on small businesses.

The latest version, approved by a vote of 26-13 Wednesday, now heads to the Senate, which will decide whether it’s ready to be debated or if it should first be reviewed by other committees.