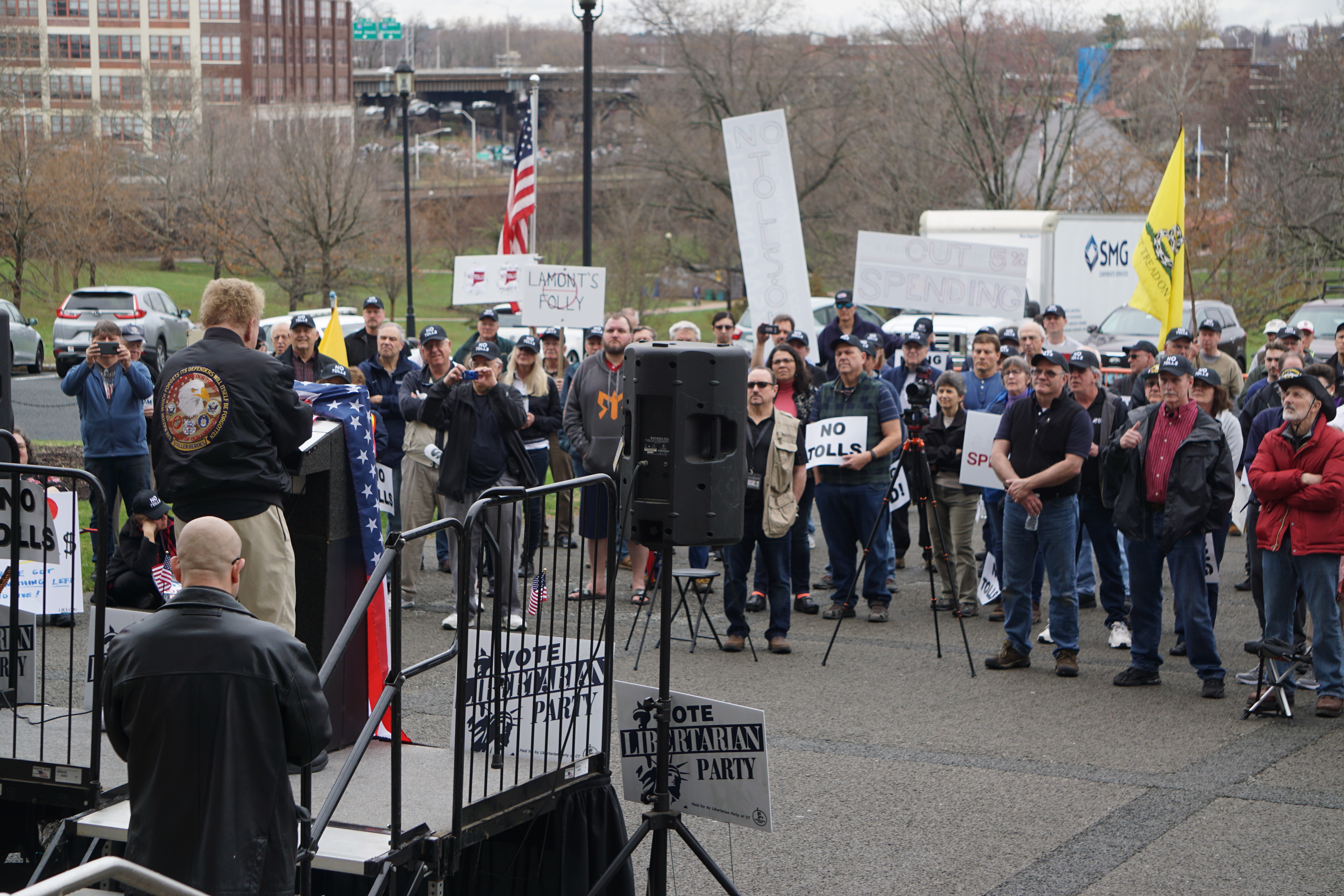 Brad Davis of WRDC. The crowd was estimated at 125.

Talk radio came to the north steps of the State Capitol on Saturday, offering a modestly attended anti-tolls rally a darker and occasionally profaner version of the standard radio chatter since Gov. Ned Lamont reversed himself in February and proposed a comprehensive system of highway tolls, not the limited levy on trucks he favored during the 2018 campaign.

Todd Feinburg of the 50,000-watt WTIC-AM tilted his head toward the Capitol and pronounced state government a “criminal enterprise” and its elected officials “assholes.” Steve Noxon of the smaller WATR-AM in Waterbury said tolls were less about improving transportation than enriching Lamont’s friends on Wall Street.

“I don’t know why there aren’t 50,000 people here today to protest the insanity of what’s going on,” Feinburg said, looking out at an audience that barely covered the wide sidewalk below the north steps.

The Capitol rally had competition from No Tolls CT, which scheduled protests in Windsor, Milford and Old Saybrook. The Hartford rally was sponsored by the Libertarian Party with organizational help from Joe Visconti, a Quixotic figure in Republican politics, and promoted by radio hosts on several stations, including WITC, WATR, WRDC and WJJF-FM.

“The radio hosts have our back,” Visconti said.

Visconti, who endorsed limited tolls during a campaign as a petitioning candidate for governor in 2014 and again as he briefly campaigned in 2018, acknowledged differing views among the protest movement. He said he was objecting to Lamont’s reneging on a promise to impose tolls only on truck traffic.

Republicans have adopted the no-tolls movement as a wedge issue for 2020, but elected officials played no significant role Saturday.

Frank Farricker, the former Democratic chair of Greenwich, told the audience that many Democrats oppose the tolls plan, especially in Fairfield County, where the numerous entrances and exits make I-95 as much a local road as an interstate.

“You have way more fans on the Democratic side than you know,” said Farricker, a former CT Lottery chairman under Gov. Dannel P. Malloy.

The Lamont administration has articulated only a broad outline for tolls on Route 15 and Interstates 84, 91 and 95, not a blueprint. The Federal Highway Administration will allow tolls on interstates here as an anti-congestion initiative. Lamont suggested last week his view of congestion pricing was modest— estimated at just a 40-cent surcharge for a rush-hour commute between Stamford and New Haven.

If the General Assembly authorizes tolls, the administration then would have to negotiate terms with federal highway authorities.

Rob Blanchard of Lamont’s press staff stopped by to watch.

“The people who attended today’s rally aren’t saying no to tolls. They’re saying yes to taking out a $30 billion loan, as proposed by the Republicans, recklessly adding to the state’s deficits and requiring Connecticut taxpayers to foot 100 percent of the bill, plus interest,” Blanchard said.

Blanchard was referring to a GOP alternative that calls for using the state’s current ability to borrow to finance transportation projects that are soon to be unaffordable, if only financed by the state’s fuel taxes and motor-vehicle fees. Lamont says tolls could raise $800 million annually, with 40 percent coming from out-of-state drivers. The state still would borrow for major projects, the debt service paid by tolls.

But Saturday was not a day for debating the pros and cons of various plans to finance a transportation infrastructure that the governor’s GOP critics acknowledge is badly in need of maintenance and improvement. The talk-radio hosts say the issue is a fraud, a means by corrupt officials to ensure government can feed public-sector unions.

“They have all the money they need for construction projects. The whole thing is a lie,” Feinburg said. “The purpose of that money is to pay the bill for all the other shenanigans that they do here, especially for the unions.”

Feinburg cast state government, especially the Democrats who have controlled the governor’s office for eight years and both chambers of the General Assembly for all but two of the past 32 years, as focused on providing services and programs that buy votes.

“They used to talk about good government. That was one of their little slogans for themselves. Well, they gave that up,” Feinburg said. “Nobody was buying good government. but they’re buying pay to play.”

In his view, the voters are as transactional as the politicians.

“They’re buying the idea of ‘I vote for you, you give me something.’ And that’s working really well for the Democrats,” Feinburg said. He quickly riffed on proposals to raise the minimum wage to $15 and create a paid family medical leave program as the latest forms of pay to play.

While Feinburg saw the Democrats as beholden to unions, Noxon of WATR portrayed Lamont as a tool of Wall Street, interested in transportation as a source of fees on bonding.

Brad Davis of WDRC had a tamer message. A fixture on Connecticut radio for decades, Davis often has counted politicians among his friends, among them former Gov. John G. Rowland, whose sentencing he attended as a family friend.

“I know how much you love America,” said Davis, who now walks with a cane and was helped onto the stage. “Don’t ever give up on the greatest country in the world. We’re going to have our problems. We have some now, but in the end, we’re going to take the hill and we’re going to win the battle.”

Lee Elci, who has a show on WJJF-FM and writes a column for The Day of New London, said voters are too tolerant of politicians who say one thing during a campaign, then another in office.

“As a result, you get this, you get tolls. And you’re going to get them, I’m sorry,” Elci said. “I wish I was more optimistic.”

Elci said he feels outnumbered, that taking a metaphorical hill may be beyond reach.