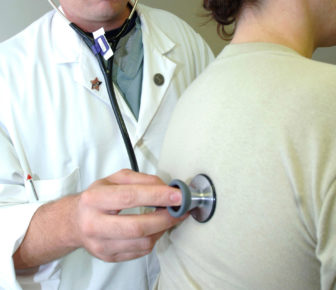 A bill that would protect people with pre-existing conditions who are on short-term insurance plans cleared the House Wednesday.

They could not say how many people the bill would protect, but pointed to data compiled by the Kaiser Family Foundation showing that as many as 522,000 people younger than 65 in Connecticut have pre-existing conditions such as cancer or heart disease. It was unclear how many of those residents are on the short-term plans.

Rep. Sean Scanlon, D-Guilford, a key backer of the bill, said it would help “give our constituents peace of mind” as the Trump administration encourages more families to buy inexpensive, temporary health policies.

On those plans, people with pre-existing conditions may be denied coverage or charged higher prices.

“People are afraid. They worry about going back to a darker time in this country and in this state when people … could be discriminated against simply based on the health characteristics they have, regardless of whether they caused those to happen,” he said.

The bill also changes the way someone could be considered to have a pre-existing condition, meaning a person would not need to receive a medical diagnosis to demonstrate that they have such a condition. That would bring Connecticut’s law in line with the federal mandate.

The Connecticut Conference of Municipalities had opposed the measure, saying the new regulations could drive up expenses for cities and towns. “The increased costs would result in higher premiums for municipal employers and most likely property increases,” the group noted in written testimony.

But analysts with the legislature’s nonpartisan Office of Fiscal Analysis said the bill has no financial impact to the state or its municipalities.

Scanlon did not say whether the measure would force Connecticut to pick up additional costs should the Affordable Care Act be struck down, but he pointed out that residents could pay more for uncompensated care.

“When we do not have people with debilitating illnesses or pre-existing conditions utilizing health insurance, they find other means to get the care,” he said. “That often means they go to our hospitals and seek care that way, which drives up the uncompensated care costs that all of us then have to share in the burden of.”

The bill now heads to the Senate.