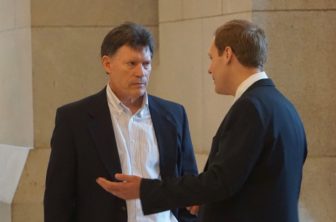 Sen. John Fonfara, left, said it would be “a struggle” to find funding to expand state health coverage for thousands of undocumented children.

Despite early enthusiasm and a brawny push from the nonprofit health community, lawmakers now say a plan to extend state-sponsored health coverage to about 18,000 undocumented children is unlikely to succeed this year.

The proposal, hailed by advocates as crucial in protecting some of Connecticut’s most vulnerable people, would open Medicaid and the Children’s Health Insurance Program, known as HUSKY A and HUSKY B in the state, to people younger than 19 regardless of their immigration status.

Nonprofit groups had estimated the first-year cost to be about $4 million and the second-year expense to be $15 million. The state Department of Social Services, which administers the programs, had warned the annual price tag could reach $64 million and would not be reimbursed by the federal government.

Officials with Connecticut’s nonpartisan Office of Fiscal Analysis recently pegged the cost at $53 million per year for the next two years.

“That kind of number, given our current efforts to try to just balance the budget, would be a struggle,” said Sen. John Fonfara, D-Hartford, a co-chairman of the legislature’s Finance, Revenue and Bonding Committee. “I don’t see how we generate the revenue to pay for something like that, or how appropriations incorporates that into their budget.”

“We get a lot of requests that have big ticket items and they may be important in terms of affecting folks,” he said, “but our challenges are significant just in meeting our current obligations.”

While she did not rule out the prospect of incorporating the expansion into her committee’s budget proposal, Walker said finding more than $50 million per year for a new initiative would be very difficult.

Though cost was always an issue, proponents of the legislation have noted that it could help defray the escalating expense of uncompensated care.

“Preventative care for children reaps huge outcomes in the long run,” Jay Sicklick, deputy director of the Center for Children’s Advocacy, told the CT Mirror in March. “It reduces acute care costs that are going to be borne by acute care hospitals down the road if children who are ineligible for health coverage are then forced into emergency situations.” 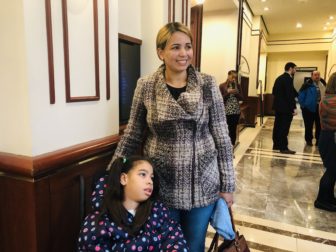 Gislene Batista, right, stands with her 11-year-old daughter, Emily. Batiste, who came to the United States from Brazil, is pressing for state-funded health coverage for undocumented children like her daughter.

In testimony last month, nonprofit and state advocates expounded on the benefits of the plan, including its potential to encourage thousands of young people to seek routine health maintenance. They were joined by undocumented families who pleaded with lawmakers to help their children.

“Emily has wishes and dreams just like any other child her age, and I know she could be in better health and achieve those dreams if she could have better medical insurance and health care,” Batista, who lives in the Bridgeport area, testified through a translator. “But these things do not work well for us undocumented immigrants.”

The bill cleared the Human Services Committee, but was dealt a setback when lawmakers recently received cost estimates for the program.

“They need to wait until the state is in a much more reliable fiscal position,” said Rep. Gail Lavielle of Wilton, the ranking House Republican on the Appropriations Committee. New initiatives aren’t affordable in state’s current financial climate, she said.

Connecticut’s finances, unless they are adjusted, are on pace to run between 9 and 10 percent in deficit in each of the next two fiscal years, according to Gov. Ned Lamont’s budget staff. That represents potential deficits of $1.7 billion next fiscal year and $2 billion in 2021.

The Appropriations Committee has until May 3 to develop a counter-proposal to the new, two-year state budget that Lamont recommended on Feb. 20. That plan did not include a HUSKY expansion to serve undocumented children.

Lamont declined to comment Thursday when asked about his support for the proposal.

Lawmakers are striving to adopt a new spending plan before the regular session ends on June 5.