Study: Latinos students more likely to be arrested at schools with police officers 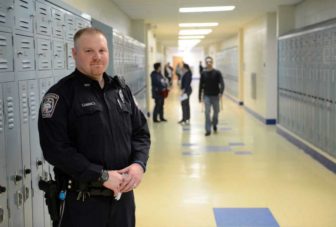 Latino students are six times more likely to be arrested at a school with a school resource officer — a sworn police officer — than at a school without one, according to a study released Thursday by the New Haven-based non-profit advocacy group, Connecticut Voices for Children.

The research, based on the 2015-16 school year, showed that while students of all races are more likely to get arrested at a school with school resource officers than at those without, Latinos are particularly impacted.

“While many schools look to school resource officers to improve school safety and education outcomes, these findings are troubling evidence that their presence may contribute to increased discipline for minor offenses and far greater arrest rates for Latino students,” said Camara Stokes Hudson, associate policy fellow at Connecticut Voices for Children. “We need to ensure that the presence of [school resource officers] does not lead to unnecessary discipline or exacerbate existing inequalities in our education system.”

Asked why the disparity for Latino students might be so high, Hudson said, “That’s a point that requires further investigation. We don’t have an outright answer for that.”

She did note, however, that many Latino students are also black, but may identify as Latino only.

The study considered data from a little more than a thousand Connecticut schools — from elementary through high school —  and concluded that while the presence of police officers does not appear to contribute to a safer school climate or improve academic outcomes,  it may contribute to more Latino students being arrested or referred to law enforcement.

“While many schools look to school resource officers to improve school safety and education outcomes, these findings are troubling evidence that their presence may contribute to increased discipline for minor offenses and far greater arrest rates for Latino students.”

The study found that 24 percent of the schools had school resources officers and noted that the number of schools with police officers went up by 29 percent between 2012 — when the Sandy Hook shooting occurred — and 2015-16. Hudson said that schools with teenagers were far more likely to have police officers than those with young children.

The report notes that there is no uniform definition or job description for a school resource officer and their roles and responsibilities vary widely. Those responsibilities may include maintaining school security, teaching, and mentoring students.

As concern has grown about keeping students safe, the report said, the use of law enforcement officials is often proposed as a potential solution.

“Given a national rise in school shootings, stationing police in schools may seem like an intuitive way to ensure the safety of American’s most valuable resource — its children,” the report said. “However, when SROs [school resource officers] are present in a school, administrators may defer disciplinary duties to SROs. Unlike security guards and school administrators, SROS have the power to arrest students.”

The report says that arrest can be traumatizing for students and even a single arrest can result in reducing a young person’s chance for future educational and employment opportunities. 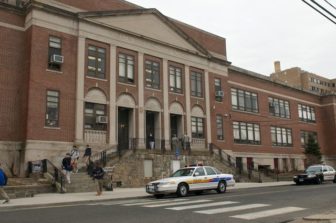 The study showed that on measures related to school safety — such as the use of weapons, drugs or alcohol, theft, and property damage — the average number of incidents of such behavior did not different significantly between schools that did or did not have school resource officers.

Academic performance, as measured by average test scores on the state’s  Smarter Balanced Assessment Consortium test, also did not differ significantly between schools with or without a police officer.

However, the study did find statistically significant evidence that the the presence of an SRO may contribute to more students experiencing discipline as shown by the higher rates of students referred for arrest.

In addition, students in schools with SROs were more likely to be disciplined for behaviors that are not criminal but are considered violations of school policy such as skipping class, insubordination, or using profanity.

The report said it was unclear whether School Resource Officers participated in reporting the school policy violations.

The researchers found that the most likely district reference group — districts grouped together by the state because of similarities —  to have school resources officers  were districts in the state’s “B” grouping which includes some of the states wealthier towns, including Glastonbury, Farmington and Simsbury.  In that reference group, 42 percent of schools had school resource officers in 2015-16.

In Glastonbury, Superintendent Alan Bookman said the town has had police officers in schools for more than a decade, with one officer at the high school now and another at the middle school.

“They won’t arrest a student unless we call them into a situation. If it’s a blatant breaking of the law, then we call them.”

Bookman said the officers have nothing to do with school policy violations and only arrest a student if asked by school personnel to do so.

“They won’t arrest a student unless we call them into a situation,” Bookman said. “If it’s a blatant breaking of the law, then we call them.”

He said he doesn’t think the presence of the officers leads to any more arrests than would occur without them.

Asked whether the officers make the schools safer, Bookman said, “I think it doesn’t hurt. Many things come into play to make for a safer environment. They are one of them.”

He said the school is always given an officer who relates particularly well to the students. “They do develop a relationship with the kids and help to counsel the kids,” he said.

The researchers recommend that the General Assembly request a study on the presence of school resource officers compared to security guards and the use of memoranda of understanding that detail the roles and responsibilities of police and school personnel. They also said that all school districts should be required to include information on the legal rights of students in their student handbooks and review those rights with parents on an annual basis.