Voter suppression, not fraud, is undermining our elections, she says 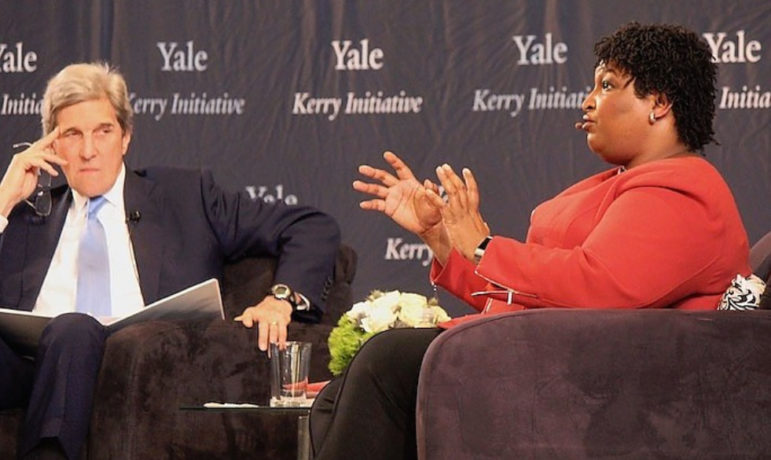 Political superstar Stacey Abrams stopped by her alma mater Yale University last week to deliver a warning: a failure to protect the vote is costing us our democracy and our standing in the world.

Abrams, a former state senator who narrowly lost a bid for governor of Georgia, sat down with former U.S. Secretary of State and fellow Yalie John Kerry, at Woolsey Hall to talk about defending democracy as part of a two-day conference hosted late last week by the Kerry Initiative-Yale Jackson Institute for Global Affairs.

She said voting is a fundamental right that is being eroded in the United States — not by fraud, but by suppression.

The Yale Law grad, who was the first black woman major-party gubernatorial nominee and delivered the Democratic party response to the president’s State of the Union speech this year, didn’t pull any punches about what she thinks needs to happen in the coming 2020 presidential election. Voters need not just to kick President Donald Trump out of office but must also swing the pendulum away from oligarchy and authoritarian rule, she argued. And for Abrams, it all starts with voting.

She described what happened during her gubernatorial race in Georgia — long lines at reduced black polling stations, problems with absentee ballots, purging of voter rolls — as part of a long effort that began with the end of Reconstruction and picked up steam with the erosion of the Voting Rights Act in 2013, when “any of the restraints on stripping people of their right to vote were removed.”

Voter suppression, she said, looks like defunding counties with high numbers of black people so that they don’t have the resources they need at election time. It looks like declaring English as the only official language. It’s making an ID card necessary to cast a vote in places where it is difficult for some people to obtain such identification. It’s making it harder for college students to vote on campus, or to use their student IDs for identification.

“It is systemic and systematic,” she said. “There never was a rash of voter fraud. We can’t get 50 percent of Americans to do anything. No one is putting on a wig and a mustache to vote twice.”

Kerry said his goal for the conference wasn’t to have partisan conversations that only one party (not Democrats) seems actively engaged in voter suppression. Abrams concurred, noting that the nation is changing and only one party (not Republicans) has tried to embrace that change. Both Kerry and Abrams are Democrats.

“There is one party that is heterogeneous, that is intentionally diverse,” she said. “Not necessarily always great at managing that diversity, but at least we know it exists.

“And there is another party that is shrinking demographically —that is homogeneous and that recognizes that the loss of power that is directly correlated with an increase in diversity means the diminution of not only power but resources and money and the ability to impose values,” Abrams continued. “When you recognize that that is happening, you start to see every law and every rule in a different light.”

She has started an organization, Fair Fight Action, to press the issue of voter access to the ballot.

“What we have to do in 2020 is sound the alarm,” she said. “We have to talk about [voter suppression] as relentlessly as the lie of voter fraud is spread. Because if we do not call it what it is, we will not address it.” 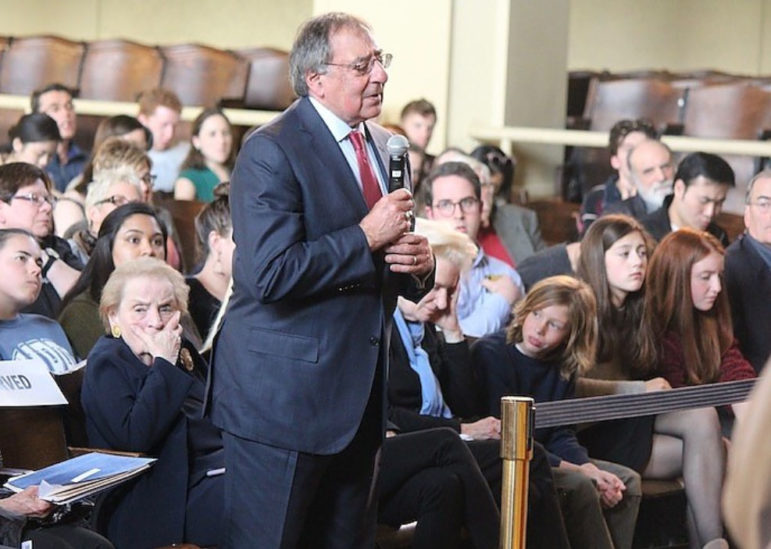 Abrams said fighting voter suppression matters because it is key to pushing back against the authoritarian behavior of Trump, that is enabled by a Senate benefiting from what she called the president’s “ineptitude.”

“So yes, you get a tax cut. But also you get the war in Yemen,” she said. “Part of the responsibility we have is that we have to reclaim our international reputation, which cannot be reclaimed until we can prove that we are actually still a democracy. And that means a very robust engagement in the 2020 election not only to change the leadership. You can vote for a Democrat; you can vote for [third-party hopeful] William Weld. It is most important that we replace the current occupant [of the White House] with someone who respects the presidency and respects the integrity of our international standing and that’s what we don’t have.”

When people don’t vote, can’t vote, or are kept from voting so that they won’t have a voice, it flies in the face of America’s centuries of democratic tradition, Abrams said.

“Why that terrifies me is that things don’t simply stop because America ceases to participate,” she said. “In fact, we know that there is an acceleration of the erosion of global democracy.”

“We stand as an example of what should be because of how badly we have failed. America is an example of why democracy is important because we have had to correct ourselves so many times. Acknowledging that black people are actually wholly human, acknowledging that women should be allowed to be part of the body politic, making Native Americans citizens, moving away from our fairly xenophobic immigration policies over time, each of those moments of correction stand as signals to the rest of the world that we can get better, not that democracy is perfect, that we are made more perfect by each of our corrections and that when we stop correcting ourselves, and worse when we celebrate our ignominy we undermine our value as part of an international conversation.”

Abrams concluded that this current moment in history is less a re-ignition of the Civil Rights movement and “more of an existential crisis” for the nation.

She said the right to vote is the only way the nation makes policy on climate change, reproductive choice, immigration. In a democracy, voting rights are for everyone, she said. And when certain groups are targeted for voter suppression, it erodes the rights of everyone.