Lamont ratchets up pressure for vote on tolls 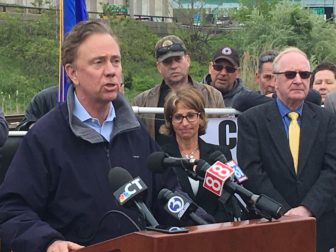 Gov. Ned Lamont discusses tolls in front of a construction site on I-91 in Hartford

Gov. Ned Lamont urged business and labor groups Friday to ratchet up pressure on fearful legislators to vote on his tolls proposal before the session ends on June 5.

The Democratic governor also disclosed he would support a temporary transfer of $100 million per year in bonding from other programs to transportation to accelerate construction work until toll receipts arrive in 2024.

“I have reached out to Republicans and Democrats,” Lamont said during a press conference overlooking ongoing reconstruction of a section of Interstate 91 in Hartford’s South End  near the junction with I-84. “I’ve tried everything I could to get the legislators willing to step up and cast a tough vote. They don’t always like a tough vote.”

The governor said Connecticut has had a long-running and detailed debate about the best way to pay for a rebuild of its transportation infrastructure, and the time for talk is over.

“I’ve tried everything I could to get the legislators willing to step up and cast a tough vote. They don’t always like a tough vote.”

“We have a plan that’s ready to go,” Lamont added. “I’m ready for them to bring that out to the floor. Let’s let that see the light of day and have a vote on it.”

Business and labor leaders stood with the governor Friday to press for an immediate vote on tolls.

Joe McGee, vice president of the Business Council of Fairfield County, called Connecticut’s aging transportation infrastructure “a bigger issue than taxes” as far as impediments to economic growth go. “The status quo has shrunk us into a no-growth strategy.”

Don Shubert, president of the Connecticut Construction Industry Association, said “unless we invest in infrastructure, Connecticut has a very bleak future.” 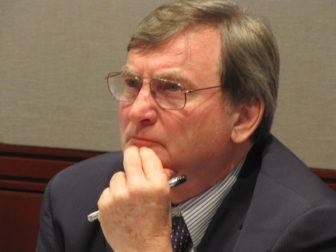 Nate Brown, a spokesman for the Connecticut Building Trades Council and political director for Local 478 of the International Union of Operating Engineers, said Connecticut’s highways, bridges and rail lines have become “a hindrance for our economic development, public safety and quality of life. … You have our 100 percent support on this (tolling) issue.”

Republicans, who are in the minority in the state House and Senate, are steadfastly opposed to tolls.

Lamont’s fellow Democrats in both chambers have pressed for more details about the governor’s plan, particularly what extra resources he would dedicate to transportation between now and when toll receipts might arrive.

Connecticut currently borrows $700 million to $800 million per year for capital work, which is combined with about $750 million in matching federal grants.

DOT Commissioner Joe Giulietti recently told lawmakers he needs at least $2 billion to make a difference — and then that annual number would need to grow throughout the 2020s and 30s.

DOT officials also told a key legislative panel last month that Connecticut is barely treading water with its current capital spending of $1.4 billion to $1.5 billion per year. In other words, the average condition of roads, bridges and rail lines is being maintained roughly the same.

Tolls would raise $800 million per year by 2024 or 2025. But Lamont had been criticized for proposing no additional sources to cover the interim.

The governor said Friday he would be willing to transfer $100 million per year away from other borrowing programs to support transportation. Connecticut also borrows funds for school construction, state building maintenance, clean water projects, open space and farmland preservation, and economic development initiatives.

That’s less than the $250 million annual transfer that legislators from both parties endorsed in 2017 to keep the transportation capital program afloat until a long-term funding plan could be resolved.

“Unfortunately, that $100 million is nowhere near what Connecticut needs to improve infrastructure today,” Senate Minority Leader Len Fasano, R-North Haven, said Friday. “What the governor appears to be proposing still leaves a massive problem in the short term, that makes our long term challenges even more difficult to address.”

“I view it as an act of desperation, not an act of compromise,” said Deputy House Minority Leader Vincent J. Candelora, R-North Branford.

It would have more than $2.1 billion each year to spend on transportation projects — without tolls.

But Lamont said Connecticut would rack up a huge amount of debt under this plan, and could avoid a lot of it by paying cash for some projects with toll receipts. In addition, as much as 40 percent of toll receipts would come from out-of-state motorists, he said.

“There is not sufficient detail on many parts of the bill,” Looney said. Legislators still have concerns about whether there will be enough funding for transportation construction before toll receipts arrive five years from now, the senator said. They also want more information on the toll rate discounts that would be offered to Connecticut residents and frequent travelers, as well as on any additional funding the governor would support for bus transit services which are crucial to assist working poor families, he said.

House Speaker Joe Aresimowicz, D-Berlin, praised Lamont’s willingness to compromise, but didn’t comment on the governor’s charge that lawmakers are afraid to vote on the tolls issue.

“I applaud Governor Lamont for taking steps to incorporate Republican ideas and commit general bonding funds to our transportation system in an effort to find common ground on tolls legislation,” Aresimowicz said. “I have said all along that it isn’t simply about whether someone is for tolls or against them. It is about creating the most sustainable plan that is fairest to taxpayers, to fix our aging and outdated transportation infrastructure.”

Also Friday, the governor deflected, but did not refute, a recent report in the Hartford Courant that he privately had offered to scale back his tolling plan to exclude the Merritt Parkway to attract more support among legislators.

“Right now our plan is very clear,” the governor said, indicating he wants no more than 50 electronic tolling gantries in total spread along key points on Interstates 84, 91 and 95 as well as the Merritt Parkway.