Lamont talks tolls to Dems: ‘I know I put you in a tough vote’ 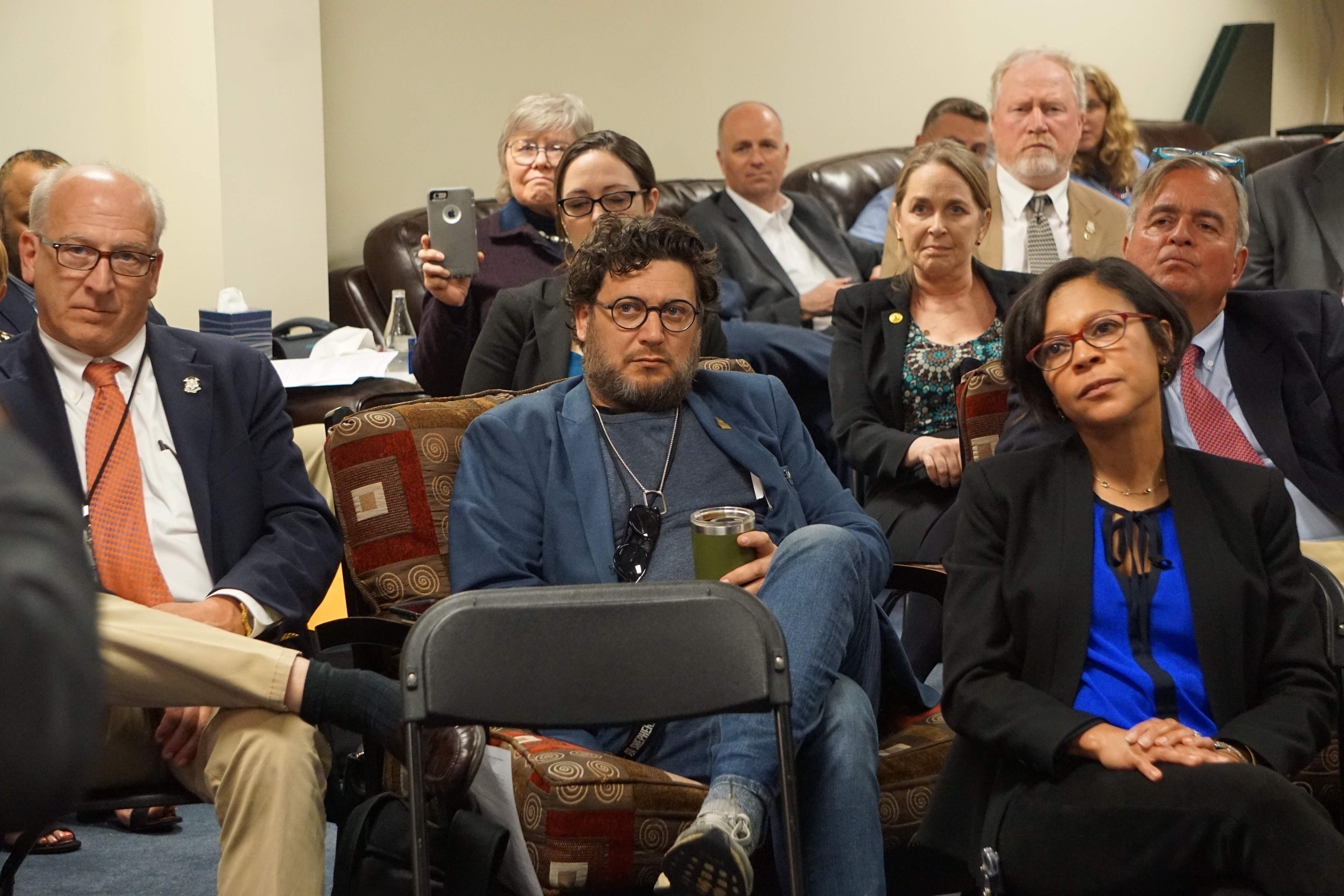 Gov. Ned Lamont simultaneously delivered an apology and pep talk to the House Democratic caucus Wednesday night, acknowledging that his highway tolling proposal had put fellow Democrats “in a pickle,” while defending the plan as a necessary and overdue boost to Connecticut’s lagging economy.

Hands on hips, Lamont spoke for seven minutes to Democrats in their caucus room, a place typically off limits to the press and visitors. He assured them he was deeply committed to the fight for the passage of tolls — and the re-election of those who joined him. Lawmakers stood and applauded as he left without taking questions from them or the press.

House Speaker Joe Aresimowicz, D-Berlin, had recently suggested the visit, and with a few minutes notice to the press, Lamont and his senior staff made the walk from his corner office on the second floor of the west side of the State Capitol to the caucus room on the east side. Lamont quickly told them he was demanding a tough vote.

“I know that,” Lamont said, his voice dropping as he scanned the room. “I’m asking every one of you to cast a really difficult vote.”

He is not asking from a position of strength. By one recent measure, his approval rating is among the bottom five of U.S. governors, undoubtedly the consequence of his unexpected call for a comprehensive system of highway tolls, not the limited levy on trucks that he proposed during his campaign last year.

After describing a vote for tolls as one of the most important things they could do to get the state moving again, Lamont circled back to where he began, acknowledging his role as the proximate cause of their political jeopardy.

“I owe you something else,” Lamont said. “I put some of you in a pickle, because I ran for office, and you know I said I think we can do this probably with trucks. We’ll get started with trucks only tolling.”

Lamont said a truck-only tolling system in Rhode Island is still the subject of litigation. Nothing has been clarified in courts, and such limited tolling would not raise the money Connecticut needs to keep its special transportation fund solvent.

“I just don’t want us to nickel and dime this any longer,” Lamont said.

His audience listened politely. No one interrupted him.

“I know I put you in a tough vote,” Lamont said. “It’s the most important vote you can take, and I’m going to be standing here with each and every one of you. I’m going to be putting my shoulder to the wheel.”

Aresimowicz stood behind Lamont and to his left.

The mood broke when Lamont described stopping into a Republican meeting on tolls on his way home to Greenwich earlier this week.

“I couldn’t stop myself. I walked into that room. Everybody got quiet,” he said.

They laughed when Lamont described challenging the leader of a grassroots anti-tolls group.

Someone yelled the name Patrick Sasser, who has mixed it up with Aresimowicz.

The tolls plan still is a work in progress. Lamont stressed that it would raise significant funds from out of state motorists, and that his administration would lessen the blow on Connecticut motorists with discounts.

“It is not an easy vote, but it is the right vote,” Lamont said. “And I need you all to stand up.”

They laughed when he suggested that the House take the lead on tolls: “Maybe the Senate could use a push from the House.” 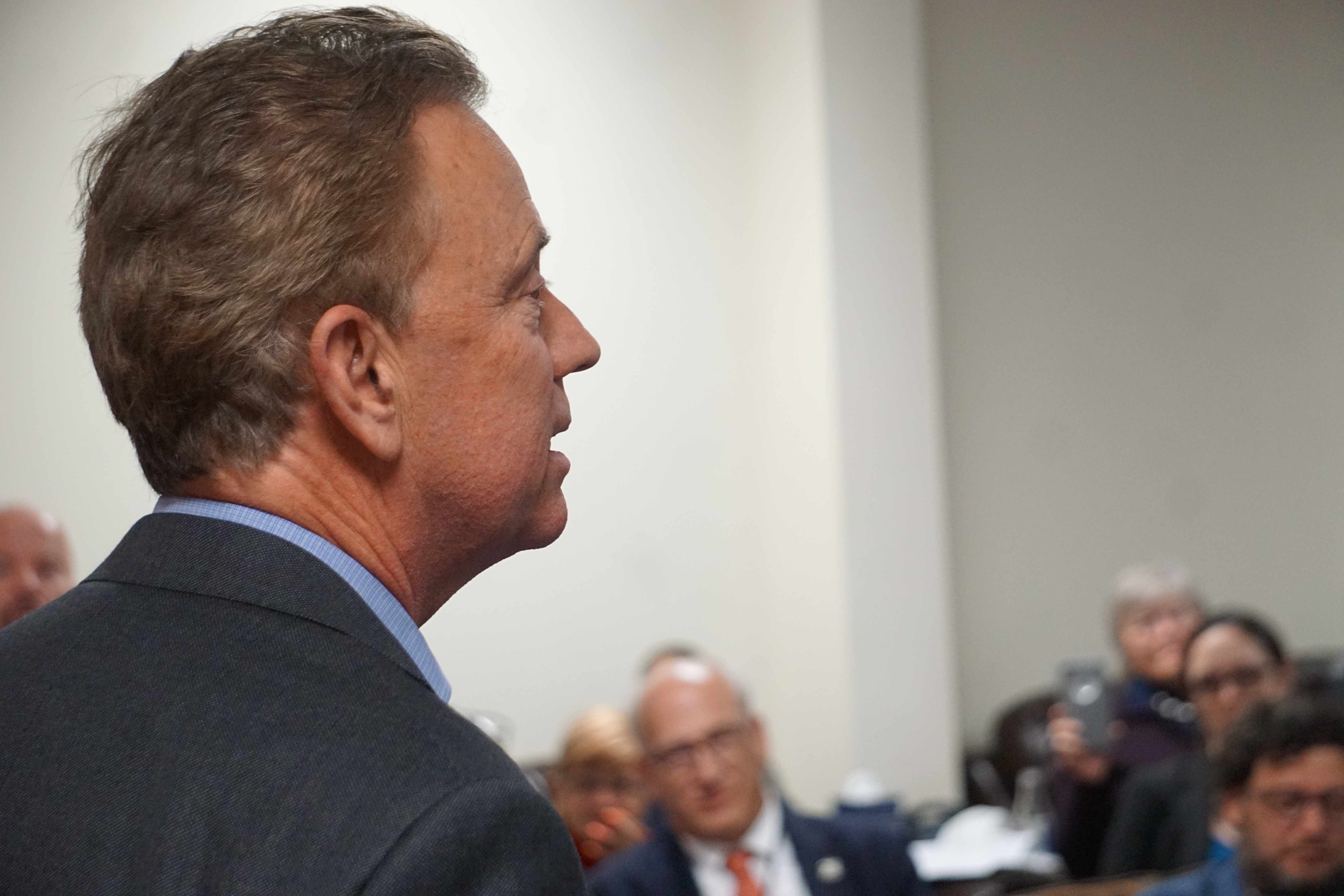 While the GOP has offered to relax restrictions, it opposes new pandemic funds for state and local governments.