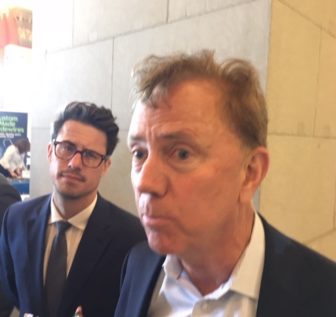 Gov. Ned Lamont conceded Tuesday that the 2019 session of the General Assembly will end June 5 without a vote on highway tolls, recasting his focus for the final weeks to delivering a budget that will provide a reliable fiscal blueprint for Connecticut for the next two years.

“My first priority is to get an honestly balanced budget done on time,” Lamont said. “That was a promise I made during that campaign. I heard from every superintendent of schools and mayors. ‘Even if I don’t get all the money I want, get it to me on time, so I can plan accordingly.’”

Lamont made his comments a day after meeting with legislative leaders, when it became clear to administration officials that a special session would offer the governor his best chance of convincing the General Assembly to accept a comprehensive system of highway tolls as the most reliable way finance overdue improvements to the state’s transportation infrastructure.

Later Tuesday, Lamont released a working draft of a tolls bill, An Act Concerning the Sustainability of Connecticut’s Transportation Infrastructure, that he intends to propose during the special session.  In the bill, Lamont yields oversight of tolls to a Connecticut Transportation Commission composed of six lawmakers, six administration officials or appointees and the state treasurer. It would be considered a legislative agency.

The bill was the work of the administration and the co-chairs of the legislature’s Transportation Committee.

Lamont suggested Tuesday that his acceptance of a special session on tolls was a reaction in part to a suggestion by the Senate Minority Leader Len Fasano, R-North Haven, and House Minority Leader Themis Klarides, R-Derby, that the administration has yet to full articulate a schedule and budget of transportation improvements.

“If Len and Themis think they need a little more time to think about our transportation infrastructure, I’m willing to give them a little more time,” Lamont said. “We’re going to have [Transportation Commissioner] Joe Giulietti there. We’re going to open the doors, answer every question they’ve got. So, at least we can’t have them say ‘I can’t make my mind up because I don’t have enough information.’”

But the GOP minority is not his target for votes, nor his problem. With Republicans categorically opposed to a significant system of tolls, Lamont needs to win over 76 of 91 House Democrats and at least 18 of 22 Senate Democrats, the bare minimums necessary for passage.

Republicans have offered to dedicate more of the state’s borrowing to transportation, an approach Lamont says will raise too little money while adding too much to the state’s indebtedness.

The governor is casting his plan to install tolls on the Merritt Parkway and Interstates 84, 91 and 95 as a crucial step toward economic growth, which he says is inextricably linked to an adequate system of highways and trains. The special session also would consider economic development measures.

“We’re stuck in an economic rut,” he said. “We haven’t added new jobs in a generation. Transportation is so key to our economic future, so don’t duck the vote.”

The bill released Tuesday would establish toll rates of 4.4 cents a mile for peak travel and 3.5 cents for off-peak, with authority for the Department of Transportation to vary the rates by 30 percent above or below the published rates to comply with any congestion-pricing agreement struck with the Federal Highway Administration.

Tolls are generally prohibited on interstates constructed or maintained with federal highway feds, but Connecticut is one of the states permitted to negotiate with the Federal Highway Administration over tolls aimed at reducing congestion with variable pricing,  based on peak and an off-peak travel.

Pricing would be frozen for three years, then fall under the control of the Connecticut Transportation Commission. The bill requires discounts for state drivers and creates a mechanism for lowering fuel taxes, should fiscal conditions allow.

The measure lists nine projects that would have to be funded, including the replacement of the Gold Star Memorial Bridge in New London, the I-84 viaduct in Hartford, improvements to I-95 and the reconstruction of various exits that are now chokepoints.

Fasano said he was open to a special session, but he saw no circumstance in which Republicans would support tolls. “Bring everyone in? Who am I to say no,” Fasano said. “And then we go from there.”

House Speaker Joe Aresimowicz, D-Berlin, said he had the votes for some version of tolling, but not one acceptable to the Senate or governor. He declined to identify differences between the chambers or the governor.

Lamont laughed when asked about those differences, saying, “I never have any differences with the speaker.”