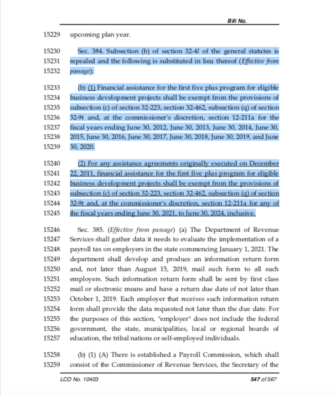 Two paragraphs could be worth $18 million.

They are only two paragraphs, tucked near the back of the 567-page budget document prepared over the weekend for a vote Monday night by the General Assembly. They are potentially worth millions of dollars to Cigna, even if the insurer’s name appears nowhere in the bill.

The budget provision extends until 2024 an expiring deadline to claim tax credits promised under the previous administration’s big-ticket economic development program, First Five. The new deadline applies to any First Five recipient — as long as their deal was executed on Dec. 22, 2011.

And that limits the benefit to one company: Cigna.

The favor comes less than a week after the health insurer strongly objected to a public health insurance option bill, a factor in the legislature backing away from the concept. The company warned the passage would prompt a reassessment of its place in Connecticut.

Unused or “stranded” tax credits are nothing new, affecting numerous companies. In any given year there are more than $1 billion in stranded credits carried over from one tax year to the next, some with no expiration dates.

Legislation to broadly address the issue has faltered over the years. The potential loss of tax revenue was too much, said Rep. Jason Rojas, D-East Hartford, co-chair of the Finance, Revenue and Bonding Committee. Instead, a small program capped at $50 million was included in the 2018 budget.

“Any time we allow tax credits on the books to be utilized, to be capitalized, it comes at a cost to the general fund or the public,” Rojas said.

His co-chair, Sen. John Fonfara, D-Hartford, said he added the provision for Cigna, saying it simply allows the company another chance at using tax credits promised in 2011.

“I see it totally, solely, as Connecticut keeping our end of the bargain,” Fonfara said.

The administration of Gov. Ned Lamont supported its inclusion in the budget.

“Cigna is a vital piece of Connecticut’s fabric,” Maribel La Luz, the governor’s director of communications, said in an email. “It provides thousands of people with good-paying jobs right here in the state, and an extension of this program represents good policy and it’s good for our economy.”

A deal announced on July 12, 2011 and finalized on Dec. 22, 2011 made Cigna the first recipient of economic assistance under Gov. Dannel P. Malloy’s program of loans, grants and tax breaks for the first five employers to create 200 new jobs.

Cigna was promised $21 million in grants and forgivable loans, plus up to $50 million in urban reinvestment tax credits, all dependent on Cigna reaching certain goals for hiring and investing in its headquarters in Bloomfield and offices in Windsor.

“We’ve utilized $12 million of the $30 million of credits earned,” Brian Henry, a spokesman for Cigna, said in an email. “We are hopeful to use the remaining $18 million over the next few years.”

The credits are payable over 10 years, beginning in the fourth year. Under the provision placed in the budget, the extension of the time under which Cigna could collect on the tax credits would be at the discretion of the commissioner of economic and community development.

Cigna is not the first company to see its stranded tax credits become usable as a result of legislation. Stranded tax credits were central the $400 million incentive deal extended to United Technologies Corp. in 2014, triggering a major UTC investment in its research, training and corporate facilities.

But the UTC deal was the subject of legislation proposed by Malloy, vetted by the legislature at a public hearing and voted on by the House and Senate in a stand-alone piece of legislation.

Cigna was the center of a controversy last week over the legislature stepping away from the public health insurance option.

The Hartford Courant reported Wednesday that Comptroller Kevin Lembo claimed a threat from Cigna to move out of state had derailed the public option. But a spokesman for Cigna denied that a threat had been made.

Lamont had endorsed the public option after several phone calls with David Cordani, the chief executive officer of Cigna. After the flap, Lamont said his relationship with Cordani was cordial and he called the CEO a “Connecticut guy.”