Angered by a controversial provision that will exempt from open meeting laws the board overseeing a $200 million public-private partnership to improve Connecticut’s schools, a state senator launched an effort to undo that language in the waning hours of the legislative session Wednesday.

Mae Flexer, D-Killingly and co-chairwoman of the Government, Administration and Elections Committee, said she proposed amendments to GAE bills still left on the House and Senate calendar — amendments that would make the board subject to the Freedom of Information Act. 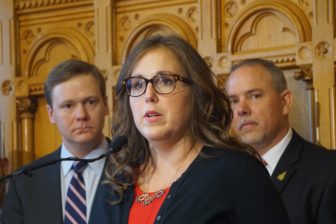 Sen. Mae Flexer, flanked by House Majority Leader and House Speaker JoeAresimowicz, speaks out about a matter unrelated to the Dalio grant.

Flexer’s comments came a day after House Speaker Joe Aresimowicz, D-Berlin, told reporters that he was comfortable with the provision that concerns the management of a $100 million private donation that is to be matched by a $100 million investment by the state over five years. The hope is to raise an additional $100 million from private donors.

In the budget documents passed this week by both the House and the Senate, legislators spell out plans for a “Partnership for Connecticut,” a non-profit corporation with an initial 13-member board to oversee the expenditure of the fund. The budget bill sets the state’s contribution for Fiscal Year 2020 at $20 million.

The bill includes provisions that Republican critics said would effectively exempt the board from the Freedom of Information Act, the ethics code and the state’s contracting standards.

On Tuesday, reporters pressed Aresimowicz to explain how the public will be kept aware of the board’s decisions and expenditures if it is not subject to open records laws.

“They haven’t even had a meeting yet,” Aresimowicz said of the new board. “They haven’t structured themselves and we’re already talking about all the things they could do wrong … Let’s wait ’til there’s smoke before we say there’s fire. I’m really excited about the opportunity to partner with individuals who are willing to put up that much money to make the state a better place.”

He said he is “absolutely comfortable with the bill that we passed … (as it applies to Dalio).  If we are proven wrong, we are the legislature, we’ll come in and change it. We’ll stop allocating the money. There are safeguards in place. We are not just going to hand millions …. of  taxpayers’ dollars out and not do some checking.”

Flexer, however, is not comfortable with the provisions.

Four hours from the close of the session at midnight Wednesday, it wasn’t clear whether any of Flexer’s amendments would be brought out for debate, let alone passed.

State officials challenged Connecticut’s poorest municipalities to think big as new funds are made available to revitalize their communities.

State social services field staff can telework about 70% of the time through December under a new ruling.