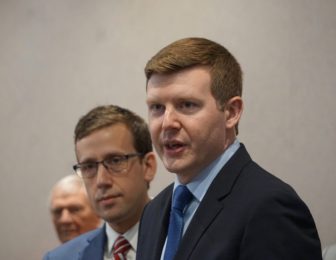 Sen. Matt Lesser, left, and Rep. Sean Scanlon, key proponents of the public option bill, had hoped the diluted measure would win passage in the Senate.

A watered-down public option health care bill, neutered after fierce debate and pushback from the state’s insurers, failed to win passage in the Senate late Wednesday.

The bill’s long slog and eventual death caps months of contentious discussion on efforts to change Connecticut’s health care landscape. It passed the House overwhelmingly this week, but could not muster enough support in the Senate to even be called for a vote.

The final legislation would have required health providers to submit annual reports on the prices they impose, the costs they incur and the payments they receive. Lawmakers would have set yearly benchmarks to contain the swelling cost of care and worked with providers who exceeded that threshold. There were no penalties, however, if an organization surpassed the benchmarks.

The bill also would have allowed state officials to seek permission from the federal government to import prescription drugs from Canada, and enabled them to pursue a reinsurance waiver to mitigate risk from sizable claims.

The proposal’s circuitous route began with a push to open the state’s health plan to small companies and nonprofits, form an advisory council to guide the development of a public option and create a discount program to provide savings on prescription drugs. Those ideas cleared a key committee but were overhauled in a new draft of the bill last month.

The second effort would have authorized the creation of a “Connecticut Option” – a state-subsidized health plan for small companies and individuals. To pay for it, lawmakers wanted to re-establish the penalty for failing to comply with the federal health coverage mandate. The measure would have effectively reversed – in Connecticut – Congress’ decision to remove the edict in the Affordable Care Act that all adults have health insurance, either through their jobs, Medicaid or by purchasing it directly.

The revised proposal also included a tax on opioid manufacturers that was expected to raise $20 million per year. Those provisions were stripped from the final version.

Rep. Sean Scanlon, a co-sponsor of the measure, said compromises with health providers, insurance companies and fellow lawmakers prompted some of the changes, but the bill also ran into trouble after Comptroller Kevin Lembo told The Hartford Courant that Cigna had threatened to leave the state if the public option passed the General Assembly. Cigna officials have denied the claim.

Some lawmakers interpreted the insurer’s comments as a call for revisions, not an actual threat. But Lembo’s remarks cast a shadow over subsequent negotiations.

Scanlon has pledged to revive the effort next year.

“I’m very disappointed to see a bill that passed with bipartisan support” in the House “be filibustered by Senate Republicans,” he said Wednesday after the regular session ended. “It’s disappointing that several of them chose politics over good policy.”