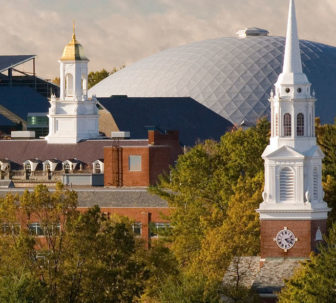 The University of Connecticut’s main campus in Storrs.

Tuition and fee hikes under previously approved schedules would go forward under the budget plan, but no supplemental increases would be needed.

The full Board of Trustees tentatively is scheduled to vote on the plans on June 26.

“Our core business is so strong, so good,” said Trustee Andy Bessette, chairman of the Financial Affairs Committee, referring to the academic, research and other programs as well as operations at John Dempsey Hospital, which is part of the health center.

Bessette acknowledged that the ongoing shift of pension expenses from state government onto its flagship university is a growing challenge. “But are we affecting the quality of the product on campus?” he added. “The answer is no.” 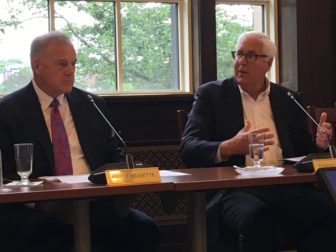 Over the past decade, governors and state legislatures increasingly have struggled with surging costs tied to pension pledged to state employees and to municipal teachers.

Connecticut has more than $50 billion in unfunded liabilities associated with two main pension funds and its retirement health care program for state employees.

This problem reflects decades of inadequate savings ordered by governors and legislatures, chiefly between 1939 and 2010.

But public colleges and universities are handled differently. The state gives them a block grant for operating costs, and additional assistance to cover only some of their fringe benefit costs. And as the state’s pension costs have exploded, higher education’s funding has slowed.

That means UConn’s main and satellite campuses would run a $11.4 million surplus next year if the university’s fringe benefit assistance wasn’t discounted to help the state with its pension debt problem.

State government reduced fringe benefit funding to the university by $31 million. This  turns an $11.4 million budget surplus into a $19.6 million potential shortfall.

Scott Jordan, UConn’s chief financial officer, said the 1.5 percent gap likely would be closed through reduced hirings and other efficiencies, and by drawing on the university’s fund balance not designated for special projects.

“UConn’s core functions … are fiscally sound and healthy,” he said.

Several years ago the trustees approved a schedule of tuition and fee hikes for each fiscal year between 2017 and 2020. The last increase of those four would take effect, as planned, in the new budget. 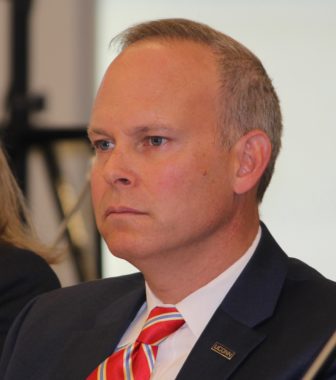 For a Connecticut resident living on campus, tuition and mandatory fees would rise from $28,604 to $30,484.

The new budget, which grows spending 4 percent, does include a modest amount of new hiring. But the university has compensated for shortcomings in state fringe benefit funding by trimming departmental spending in each of the past three years.

And Jordan said he believes that while this has not harmed core programs to date, it is not a long-term solution.

Jordan’s second note of caution is that the fringe benefit problem has the potential to worsen down the road.

A preliminary forecast of likely UConn costs and revenues shows the gap widening from $19.6 million in the upcoming fiscal year to $122.3 million by 2024.

Former state House Speaker Tom Ritter, who is interim chairman of the Board of Trustees, said UConn must remain vigilant, but added he’s pleased with the concern Gov. Ned Lamont and the current legislature have demonstrated on this issue.

“I think everybody understands,” he said. “They have been attentive. And we have terrific people in our government relations department.”

Bessette said he also is optimistic the new governor and legislature are prepared to work with UConn year after year to ensure this challenge doesn’t harm vital programs. “It’s a never-ending partnership,” he said.

The legislature formed a special working group this year to analyze the long-term impacts of the fringe benefit funding on public colleges and universities.

And the $1.13 billion budget recommended for the upcoming fiscal year for the health center would have faced a $55 million potential deficit had not Lamont and legislators agreed to a last-minute funding boost of $33.2 million.

UConn Health Center officials further whittled that deficit down to $7.1 million by scaling back spending on equipment and other capital purchases.

Dr. Andrew Agwunobi, the chief executive officer of the health center, said the remaining $7.1 million deficit would be closed with other efficiencies to be achieved throughout the upcoming fiscal year.

Similar to the budget for the main campus, the health center plan would incorporate a previously approved tuition and fee hike, but no supplemental increases are ordered to deal with the gap in state funding.

For the school of dental medicine, tuition and mandatory fees would rise as follows:

For the school of medicine, tuition and mandatory fees would rise as follows: