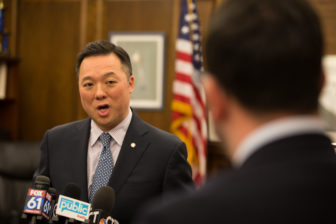 The state Attorney General’s office made public Monday a series of emails tied to its sweeping drug price-fixing complaint that it says demonstrate a conspiracy to inflate the cost of generic prescription medication.

One email highlights an attempt by a lawyer for Heritage Pharmaceuticals to coordinate a response with other companies to a congressional inquiry. In it, the attorney suggests they respond with “polite FU letters.”

“In early October 2014, Heritage received a letter from Representative [Elijah] Cummings and Senator [Bernie] Sanders as part of their inquiry into generic drug pricing,” the complaint says. “Heritage’s outside counsel immediately set out to coordinate a response with counsel for Defendants Teva and Mylan, to provide what he referred to as ‘polite f-u’ letters to Congress.”

The revelation is part of an unredacted lawsuit released Monday by Attorney General William Tong. Emails embedded in the complaint show a pattern of collusion among drug manufacturers to hinder competition, boost prices and restrain trade across the industry, Tong said.

In some of the emails, company executives decline to discuss strategy, instructing the recipients to instead place phone calls.

One exchange shows senior executives at Mylan Pharmaceuticals and Sandoz, two companies named as defendants in the lawsuit, allegedly conspiring to divvy up market share for a generic blood pressure medication.

“The conspiracy apparently pleased company executives, including a Sandoz executive who states, ‘sometimes a little help from our competition is welcome as well,'” Tong said in a statement Monday. “Another senior executive replied: ‘I guess this is what they call ‘co-opetition.'”

“The evidence demonstrates that they knew what they were doing was illegal, and that’s why they sought to mislead Congress, destroyed evidence, and cautioned each other to keep their collusive conversations offline,” Tong said. “Our investigation is ongoing … and the evidence released today reinforces the allegations in the complaint.”

Last month, the attorney general announced that he was dramatically expanding the scope and raising the profile of the state’s long-running investigation of drug price-fixing, accusing the generic drug industry of a massive anti-trust conspiracy that has cost American consumers, taxpayers and insurers billions of dollars.

In the lawsuit, filed in U.S. District Court, Connecticut and a coalition of 43 other states accuse Teva Pharmaceuticals and 19 of the nation’s other leading generic drug manufacturers of conspiring to fix prices on more than 100 drugs.

The complaint is the second filed by the office against the generic drug industry, both arising from an investigation opened in July 2014, during the administration of Tong’s predecessor, George Jepsen. Tong, who had been a state representative from Stamford, was elected in November and took office in January.

The new lawsuit names 20 corporations and 15 executives as participating in a conspiracy led by Teva. It claims the conspirators have fixed prices on more than 100 generics, turning market forces on their head and causing prices to jump by as much as 2,000 percent.

The industry generally has denied any wrongdoing, although two former executives from Heritage Pharmaceuticals, a prime target of the original lawsuit, have reached settlements with the coalition of states and are cooperating.

Officials at Teva could not immediately be reached for comment Monday. Kelley Dougherty, a spokeswoman for the company, told the CT Mirror in May: “The allegations in this new complaint, and in the litigation more generally, are just that – allegations. Teva continues to review the issue internally and has not engaged in any conduct that would lead to civil or criminal liability.”

Business Insider first obtained a copy of the unredacted multistate complaint, including the emails suggesting a response of “polite FU letters.”

After its report, Sanders slammed the emails and called for a federal review.

“In my view, their ‘polite f-u’ letters designed to obstruct our investigation were clearly illegal,” he said in a statement. “The Department of Justice must hold these bad actors accountable to the fullest extent of the law.”